Non-oncology doctors’ knowledge of oncology is frequently not up to date, with risks in the communication with patients 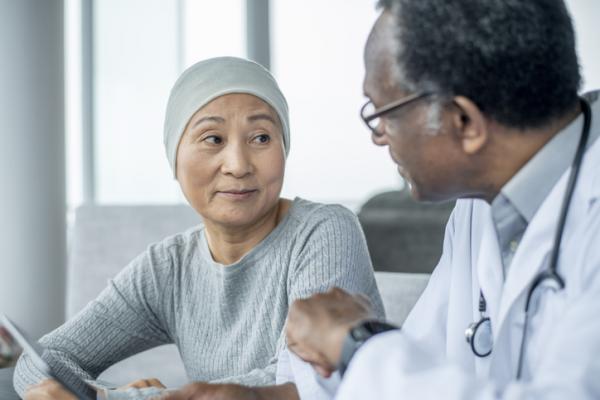 September 20, 2021 — The rapid pace of developments in the oncology field, mainly brought by cancer immunotherapy, means it can be difficult for patients, the lay public as well as for doctors not specialized in oncology to keep up with the evolution of prognosis, available medicines and their potential side-effects, as revealed by results of two studies presented at the ESMO Congress 2021 suggesting a need for broader education on current standards of cancer care.

Immunotherapy is misunderstood by patients

To evaluate patients’ knowledge about immunotherapy, CareAcross, a multilingual platform providing personalised education for cancer patients, conducted a survey (1) among 5,589 of its members primarily in the UK, France, Italy, Spain and Germany regarding the treatment’s mechanism of action, efficacy, side-effects and cost. “Immunotherapy has become an important therapeutic approach that is now delivered every day to thousands of patients across Europe,” said study author Paris Kosmidis, M.D., co-founder and Chief Medical Officer of CareAcross. “It is essential for these individuals to be well-informed because it is a complex treatment that is too often mistaken for a miracle cure – and the more they know about it, the better the communication with their medical team and thus the better their outcomes are likely to be.”

Asked to select an explanation of how immunotherapy works from multiple possible answers, almost half of all survey participants diagnosed with either breast, lung, prostate or colorectal cancer responded with “not sure / do not know”, while only about one in three (32%) chose the right answer that it “activates the immune system to kill cancer cells”.

Similarly, more than half of respondents believed that immunotherapy starts working immediately, with only one in five correctly stating that the treatment takes several weeks to become effective. “This is important because patients need to start their therapy with realistic expectations, for example to avoid disappointment when their symptoms take some time to disappear,” Kosmidis explained.

“Less than half of lung cancer patients (41%) gave the correct explanation of how immunotherapy works, and even though the subset of those who had actually received immunotherapy (241 patients) had as much as twice the correct answer percentages to our different questions, they overestimated its toxicity compared to other therapies,” Kosmidis reported, emphasising that the results seen in the survey reflect insufficient education.

Co-author Thanos Kosmidis, cofounder and CEO of CareAcross, was further surprised to see widespread unawareness of the cost of immunotherapy, which can exceed 100,000 euros per year for a single patient: “In an ideal world the cost of treatment would be irrelevant, but especially within Europe’s public health systems, people deserve to know about the mechanisms that enable those who need it to get access to this type of therapy.”

According to Prof. Marco Donia, Herlev-Gentofte Hospital and University of Copenhagen, Denmark, an expert on immunotherapy not involved in the studies, it would indeed be useful to improve general knowledge about a treatment that promises to be more tolerable and effective than chemotherapy, but which comes at a high cost in a context where cancer incidence is on the rise.

“It is not surprising however that subjects in this study who did not receive immunotherapy knew little about it, because as doctors we would not want to confuse our patients by talking to them about treatments that we will not offer them,” he said. “As a follow-up to this research, which is certainly among the first to investigate these questions, it would be interesting to conduct a survey focusing only on patients who are direct candidates for or are already being treated with immunotherapy, and to ask them not only what they know, but also how they would react when confronted with certain side-effects. This is important because well-informed patients who know what to expect can do 90% of the job of preventing side-effects from becoming severe by having them treated early.”

What non-specialists need to know about a hyperspecialized oncology arena

Better disseminating knowledge of how cancer care has evolved may also be useful for medical professionals outside of oncology, to improve the support patients receive along their disease journey. According to Conleth Murphy, M.D., Bon Secours Hospital Cork, Ireland, co-author of a survey (2) exploring physicians’ perceptions of cancer patient prognosis, the announcement of a cancer diagnosis is the first key moment when appropriate counselling is essential, although it is usually not made by an oncologist, but by a surgeon or general medical physician at the hospital. “Receiving this news is a traumatic experience and patients often immediately have pressing questions about what it means for their future,” said Murphy.

To assess doctors’ knowledge of current prognoses for different cancers, 301 non-oncology physicians and 46 medical and radiation oncologists were asked to estimate patients’ five-year survival rates for 12 of the most common tumour types across all stages of disease, as well as for six clinical scenarios with a defined cancer type, stage and patient characteristics such as age. Their answers were then compared to the most recent survival figures from the National Cancer Registry of Ireland (NCRI).

“The non-oncologists, a diverse group comprising general practitioners and consultants from various hospital specialties, provided accurate estimates of all-stage survival for only two of the 12 cancer types, while oncologists, who were specifically asked not to use their prognostic tools, gave the correct figures for four. In the more realistic task of prognosticating for specific clinical scenarios, the non-specialists significantly underestimated five-year survival across tumour types and were also more pessimistic than the oncologists overall,” Murphy reported. “These results are in line with what we had expected because most physicians’ knowledge of oncology dates back to whatever education they received during their years of training, so their perceptions of cancer prognosis are likely to lag behind the major survival gains achieved in the recent past.”

Confirming the frequency with which non-specialists come into contact with cancer patients, Cyril Bonin, M.D., a general practitioner in Usson-du-Poitou, France, explained: “I see about 10 new cases diagnosed every year in my practice, and about 50 out of my 900 regular patients are cancer survivors currently on active treatment or cured of their illness. Considering that this figure breaks down into different tumour types, our perception of a given malignancy as family doctors is likely to be influenced also by the outcomes of the specific cases we have encountered.”

To avoid presenting people with unduly bleak expectations, Murphy recommended that all physicians who routinely interact with cancer patients in their clinic familiarise themselves with the latest statistics and trends in prognosis, while emphasising that non-oncologists should always refrain from answering patients’ questions with numbers. “In our survey, we saw that one of the most vastly underestimated five-year survival rates among non-oncologists was that of stage IV breast cancer, which has evolved considerably over time and now reaches 40% in Ireland. These patients must be spared the traumatic effects of being handed a death sentence that no longer reflects the current reality,” he argued.

Commenting on the findings, Donia stated: “Oncology is a highly specialised field with many different staging subgroups of patients and as many prognoses – and a physician working in melanoma would not necessarily know the survival rates for different types and stages of breast cancer,” he said. “It is not surprising that doctors outside the field of oncology would fare even worse, and it is not entirely realistic for us to expect practitioners who deal with hundreds of different diseases to keep up with every facet of a rapidly changing oncology landscape.”

Bonin added: “Amid this growing complexity, an important part of the family doctor’s role in a patient’s journey with cancer is reformulating information they have been given by their oncologist to give them a better understanding of their situation – and especially when it comes to the newer treatment modes, my experience is that patients don’t always understand the difference with conventional chemotherapy. More consistent communication with the oncology team about a therapy’s expected benefits, possible side-effects and impact on prognosis could help us to guide patients competently and provide the psychological support they need.”

1 Abstract 1510MO_PR ‘European cancer patients’ perspectives on immunotherapy’ will be presented by Paraskevas Kosmidis during the Public Policy Mini Oral Session on Saturday 18 September, 17:30 to18:30 (CEST) on Channel 5. Annals of Oncology, Volume 32, 2021 Supplement 5

2 Abstract 1723P_PR ‘Therapeutic nihilism or therapeutic realism: Perceptions of non-oncologist physicians regarding cancer patients’ prognosis’ will be available as e-Poster as of Thursday, 16 September at 08:30 CEST. Annals of Oncology, Volume 32, 2021 Supplement 5