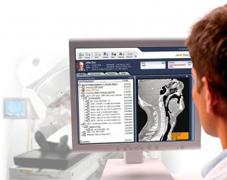 “Mosaiq 2.20 is recording and verifying the treatments we’re giving patients, which is very important to us,” says Helen Monk, manager, radiation oncology at Sequoia Hospital. “Mosaiq helps ensure that every step we’re taking is correct. If a setting or filter has somehow been set incorrectly on the Xstrahl system, the machine will not turn on because it does not match what we set in Mosaiq. If you’re working by yourself, it’s nice to have that added comfort knowing that Mosaiq is double-checking everything you do to ensure safety.”

“You can’t get the combination of filters and applicators wrong,” he said. “The intelligent ‘engine’ in Mosaiq automatically drives the workflow and checks that each step has been done correctly. From our point of view that is a very good safety feature and it gives users added confidence in what they’re doing.”

Enever added that the interface’s similarity to that of a linear accelerator made training literally a five-minute process. “It looks and behaves exactly the same way as a linac interface,” he said. “St. James’s Institute of Oncology’s aspiration to achieve a single integrated patient pathway has moved one step closer with the introduction of the MOSAIQ-Xstrahl interface.”