Patients with prostate cancer typically are required to lie still for seven to eight minutes with a full bladder during a therapy session, a process repeated 37 times over a treatment course.

"We used a single non-stop arc of the radiation beam and just under three minutes of actual therapy time," said David McKay, principal physicist at St. George's. His is the second center in Australasia to use Elekta VMAT. “He is about three-quarters of the way through his treatment course and is doing very well."

"We wanted to offer the best possible treatment to our patients by using the most advanced technology available," MaKay said. "Elekta offered a full package that included the planning system, record-and-verify system and the linear accelerator. It was very appealing that we could get all that from one provider. It helps if the planning system and accelerator come from the same vendor – so that technology improvements in the linac are then reflected in the planning system more quickly. The communication between Mosaiq and the treatment planning and therapy systems also is critical to streamline information flow."

Since its first patient, St. George's has started its second prostate cancer patient on the therapy. For both patients, VMAT planned with Monaco has been successful, McKay said.

"The plans compare favorably with our IMRT plans, and using Monaco planning for the second patient, we developed a plan that shifted the radiation dose somewhat better around the rectum, which helped us avoid exposing it to an above-tolerance dose. The doctors were very pleased with that," he said. "Additionally, the Monte Carlo dose algorithm improves our ability to calculate the final patient dose, which helps us deliver the highest therapeutic dose confidently."

Anticipating a greater volume of patients with lung cancer at the clinic, a team of clinicians, physicists and radiation therapists at St. George's has begun evaluating the 4-D imaging capabilities of Symmetry in select lung cancer patients.

"In a recent case, the radiation oncologist had created some standard margins around a tumor of a lung cancer patient scheduled for palliative treatment," McKay recalls. "We did a scan to observe the tumor motion and confirm the margins were satisfactory. We were quite surprised at how much movement the 4-D acquisition revealed in this case. The margins were just about adequate to cover the volume, but if there had been just a little bit more movement we would have had to re-plan the case. It was eye-opening. The 4-D capability is a useful feature that will help ensure the highest standard of care for our patients." 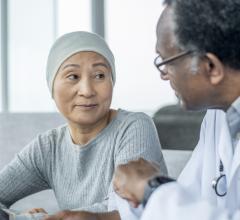 September 20, 2021 — The rapid pace of developments in the oncology field, mainly brought by cancer immunotherapy, means ...