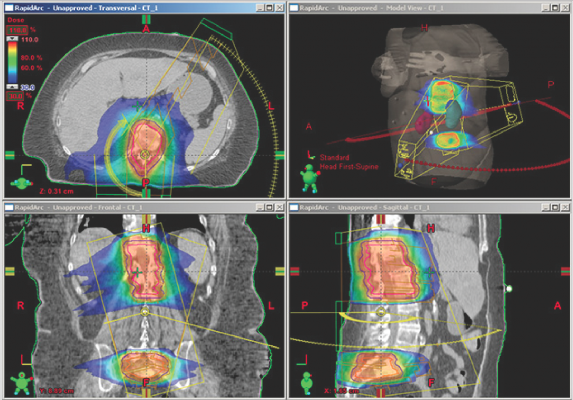 February 25, 2016 — The University of Maryland School of Medicine (UM SOM) announced that the Maryland Proton Treatment Center (MPTC) has treated its first cancer patients with proton therapy at a new $200 million facility.

The 110,000-square-foot center, which houses a 90-ton cyclotron, is the first in the eastern United States to offer ProBeam image guided intensity-modulated proton therapy (IMPT) — the most advanced and precise form of radiation therapy.

Unlike traditional radiation therapy, the radiation dose in proton therapy stops at the tumor site, reducing radiation dose exposure to surrounding healthy tissue. This reduces side effects and prevents damage to critical organs such as the heart, lungs, brain, spinal cord, liver, intestine, bladder or rectum. MPTC delivers the most precise form of proton therapy using a highly advanced technology called pencil beam scanning. With this technology, a proton beam precisely paints a tumor with radiation, using a pencil point beam that deposits dose layer by layer as it scans back and forth across the target area.

Proton therapy has been shown to be effective in treating a wide range of localized tumors in the brain, base of the skull, head and neck area, eye, esophagus, lung, liver, breast, spinal cord and gastrointestinal tract. It is also an important treatment option for children with cancer. Nearly 60 percent of cancer patients receive a course of radiation as part of their treatment plan, and traditional radiation is still an excellent option for most. However, of those patients, as many as 30 percent may benefit from proton therapy, according to William F. Regine, M.D., FACR, FACRO, the center’s executive director and the Isadore & Fannie Foxman Schneider Endowed Chairman and Professor of Radiation Oncology at the UM SOM.

“We are very pleased and excited to be able to make this form of radiation therapy available to cancer patients in the Baltimore-Washington region and beyond,” said Regine. “Proton therapy enables us to deliver a targeted dose of lifesaving radiation therapy directly to the tumor while minimizing radiation to healthy tissue. It can result in a more effective treatment for patients with fewer side effects. This technology is a powerful tool in our toolbox for fighting cancer.”

UM SOM and its Department of Radiation Oncology are operating and managing the new proton treatment center, which was developed in partnership with Advanced Particle Therapy LLC, based in San Diego, Calif., and Varian Medical Systems. UM SOM faculty physicians will treat patients at the new center, which is affiliated with the University of Maryland Marlene and Stewart Greenebaum Cancer Center (GCC), a National Cancer Institute-designated cancer center.

The first adult and pediatric patients undergoing treatment at MPTC have various types of cancer and will come from Maryland and around the world. Treatment can take anywhere from one session up to eight weeks, depending on the tumor. Each appointment lasts less than an hour but the actual time it takes to deliver the proton beam is only minutes. Patients can receive proton therapy in conjunction with other cancer treatment modalities such as surgery or chemotherapy.

“Our objective at MPTC is to provide patients with the most advanced medical care, tailored to the precise needs of each individual patient,” said Zeljko Vujaskovic, M.D., Ph.D., professor and head of the Division of Translational Radiation Sciences in the Department of Radiation Oncology, and director of the Maryland Proton Alliance, a new UM SOM-led organizational framework for proton therapy. “We have developed every aspect of the center with two key elements in mind: accessibility and affordability. That’s what is most important to our patients.”

Clinical research will also be a key priority of the new center, which will offer a robust clinical trial program to all its patients to further evidence-based medicine.