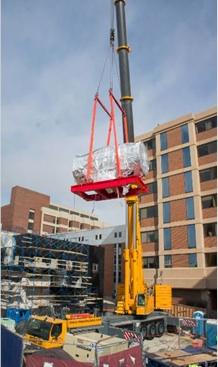 February 16, 2016 – A superconducting synchrocyclotron proton accelerator was delivered Valentine’s Day weekend to MedStar Georgetown University Hospital. The accelerator, which will become the core of the hospital’s Mevion S250 proton therapy system, was developed and manufactured in the United States and is one of only eight in existence.

When installation is complete, cancer patients in the Washington, D.C. area will gain access to proton therapy — an advanced form of radiation treatment that targets tumors precisely, while sparing much of the surrounding healthy tissue. Because of its accuracy, proton therapy is ideal for treating pediatric patients, as well as adults with cancers in or near sensitive locations, such as the heart, lungs, brain, eye or spinal cord.

The Washington, D.C. installation begins as Ackerman Cancer Center (ACC) in Jacksonville, Fla., breaks ground on the construction of a radiation vault for its second Mevion S250 Series system. ACC will be installing a Mevion S250i with Hyperscan pencil beam scanning technology.

The first system opened last April, and quickly achieved the fastest per-room ramp-up in the history of proton therapy. The installation is expected to be completed in 2017.

Meanwhile, the Mevion S250 under installation at the University of Florida (UF) Health Cancer Center – Orlando Health, in Orlando, Fla., has also achieved a major milestone. It has completed its rigorous acceptance testing and is now entering the clinical commissioning phase. Clinical commissioning is the final step before the first patient is treated.

During an intensive seven days of acceptance testing, the system in Orlando met or exceeded all specifications. Its operational control has been officially transitioned to the physics and radiation oncology proton teams at UF Health Cancer Center. It is expected to begin treating patients in a few months.