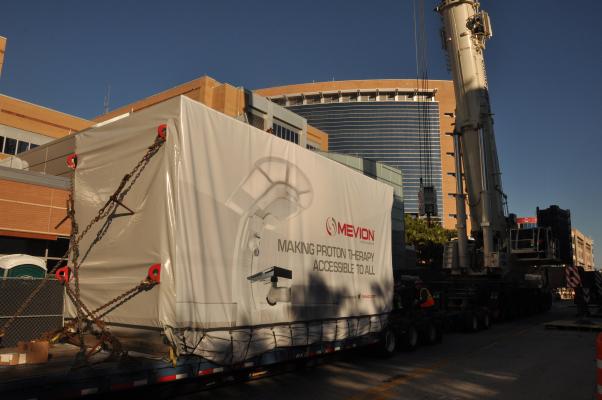 August 6, 2015 — Mevion Medical Systems announced today that it has entered into an investment agreement where up to $200 million will be invested in Mevion to accelerate its worldwide expansion. The investment was led by HOPU Investments, YuanMing Capital, and participated in by other Chinese investors and existing U.S. investors Caxton Alternative Management L.P., ProQuest Investments, Venrock and CHL Medical Partners. Concurrent with the investment, Mevion and the lead investors will form a joint venture in China to produce, sell and service proton therapy systems for the Chinese market. HOPU and YuanMing have extensive experience investing in successful healthcare companies and offer a significant network of healthcare experience in China.

The investment will support an increase in Mevion’s manufacturing capacity and global service capability to support the installation of new proton therapy sites in the United States, China and internationally.

“Proton therapy is an increasingly significant treatment modality for cancer centers around the world, and we see real value in advancing accessibility to this important therapy in China and elsewhere,” said Sunny Li, senior managing director and head of technology investments of HOPU Investments. “We have conducted an extensive industry survey of proton therapy companies. Only one company is commercially proven to have both the best technology and the best economics for healthcare providers and that is Mevion. We wanted to be a part of this success story.”

Yuan Tian and Dr. Tina Yu, partners of YuanMing Capital, stated, “We are very interested in investing in medtech leaders in the U.S. like Mevion, and truly believe that we can help these U.S. companies grow and maximize value in the Chinese market.”

The first Mevion system, which is installed at Barnes-Jewish Hospital in St. Louis, achieved the fastest per-room ramp-up of any proton therapy system, treating its first 100 patients in a single room in just 11 months. That system was followed by the clinical start of the Ackerman Cancer Center (ACC) in Jacksonville, Florida. The system at ACC beat all global patient treatment ramp-up records by reaching a per-room rate of 350 patients per year in less than three months. This treatment rate is comparable to the total number of patients treated each year at costlier four-room legacy systems. And, this spring, Mevion became the first proton therapy manufacturer to open two facilities back-to-back; the system at Robert Wood Johnson University Hospital treated its first patient less than four weeks after the first patient was treated at ACC, further evidence of its breakthrough efficiency.

The Mevion S250 delivers higher-quality, targeted radiation therapy for cancer patients at a fraction of the size and operating costs and with much higher operational efficiency than the legacy proton systems. Its modular design and smaller footprint – a single-room format occupies only 2,000 sq. ft. (180 sq. m) – means that a Mevion S250 can be added to existing cancer facilities in even the most densely populated cities with extreme space constraints, while installations can be scaled to provide multi-room capabilities at large cancer hospitals. And, it is an environmentally friendly system, using less than 10 percent of the energy of legacy systems.