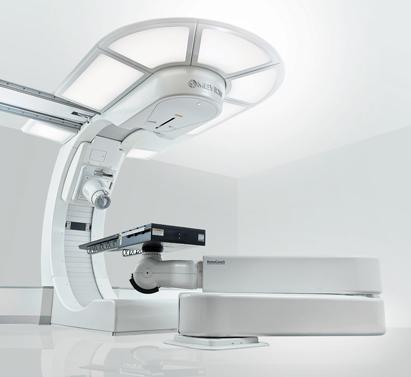 The first two patients treated at RWJUH included a young man with a spinal myxopapillary ependymoma, a cancer that affects the spinal canal. His treatment began on June 5. A second patient with a recurrent brain tumor began treatment on May 27; this patient had received full doses of radiation in the past, and re-treating him with other technologies would have proved difficult. RWJUH, in New Brunswick, New Jersey, is the flagship Cancer Hospital of Rutgers Cancer Institute of New Jersey and the principal teaching hospital of Rutgers Robert Wood Johnson Medical School.

Proton therapy provides targeted treatment to cancer cells and causes less damage to surrounding healthy tissues than photon radiation. This makes it an ideal option for pediatric and adult patients with tumors in sensitive locations, such as near the heart, brain and spine.

Traditionally, proton therapy systems have required the development of new football-field-sized facilities that have ended up costing hundreds of millions of dollars to build and operate. Because only a limited number of cancer centers have this kind of capital or space, there has been a lack of patient access to this important treatment modality. The Mevion S250 is the world's smallest single-room proton therapy system and can be readily integrated into any size cancer facility – existing or new. The result is a proton therapy solution that is 75 percent smaller and uses as much as 90 percent less energy, resulting in significantly lower capital and operating costs.

"The MEVION S250 provides RWJUH with a compact, high-quality delivery system to include in our suite of patient treatment options," said Bruce Haffty, M.D., chief of radiation oncology at RWJUH and professor and chairman of the Department of Radiation Oncology at the Cancer Institute of New Jersey, Robert Wood Johnson Medical School and New Jersey Medical School at Rutgers University. "This is an important milestone in cancer therapy for patients in this region. We can now treat patients in less time with fewer side effects with a very targeted form of radiation therapy."

RWJUH is fully accredited by the American College of Surgeons Commission on Cancer.

"We always strive for excellence in cancer treatment," said Atif Khan, M.D., a radiation oncologist at Rutgers Cancer Institute of New Jersey and associate professor of radiation oncology at Rutgers Robert Wood Johnson Medical School. "I am excited to see the benefits that the Mevion S250 brings to the patients at our proton center."

The S250 began treating patients at Ackerman Cancer Center - a physician-owned facility in Jacksonville, Florida - on April 30 and is currently treating 24 patients per day. Mevion S250 systems are currently being installed at four additional sites in the United States, including University Hospitals Health System in Cleveland, where the superconducting synchrocyclotron accelerator is scheduled to be delivered at the end of June. Other installation sites are: Stephenson Cancer Center at the University of Oklahoma in Oklahoma City; University of Florida Health Cancer Center at Orlando Health; and MedStar Georgetown University Hospital's Lombardi Comprehensive Cancer Center in Washington, D.C.