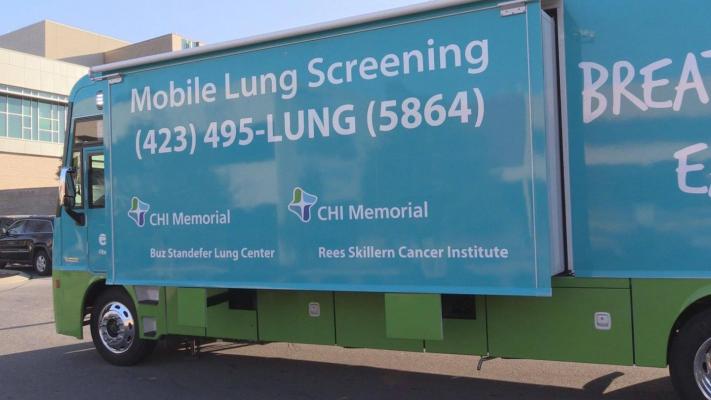 June 15, 2020 — A mobile platform for lung cancer screening with low-dose computed tomography (CT) can be developed with limited financial risk and take powerful screening tests directly to patients, including underserved rural areas where rates of new lung cancer cases tend to be higher, according to study published today in The Annals of Thoracic Surgery.

"This study shows that if you bring it, they will come," said Rob Headrick, M.D., MBA, from CHI Memorial Chest and Lung Cancer Center in Chattanooga, Tennessee. "People across the country have not been traveling to medical centers to get scans that they don't know they need. Every 3 minutes, someone in the US dies of lung cancer. We believed that if we took the technology to the people, especially those most at risk, it would be an important educational experience and lives would be saved."

Headrick and colleagues assembled a team with the ambitious task of designing and building a unique lung screening program that included a built-from-scratch bus featuring independent power, climate control, patient comfort, a portable CT scanner, and drivability. The project became known as "Breathe Easy" because it embodied the goal of reassuring many lung cancer patients through education, caring attention, hope, and pictures of their chests, helping them to "breathe easier," explained Headrick.

The bus began operations in early 2018. Researchers examined data from the 10 months that the bus was available that year. During that time, the Breathe Easy bus traveled to 104 sites and screened 548 patients. For these patients, the mean age was 62 years old with a mean smoking pack years of 41. Significant pulmonary findings were seen in 51 patients (9%). Five lung cancers were identified; four of them (80%) were early stage. In addition, non-pulmonary results also were found in 152 (28%) of the individuals screened, with the most common being moderate to severe coronary artery disease in 101 (66%) patients.

"The mobile program brings the imaging center to the patient. This can be at a place of employment, a church, or a restaurant parking lot," said Headrick. "It also makes the process quick, simple, and safe. There is no waiting room filled with people nor is a lot of time required. Screening exams have to be made simple or people will not get them done."

The Breathe Easy program currently serves all counties in east Tennessee and north Georgia within 90 miles or so from CHI Memorial — the home base of the bus. Patients are on the bus for approximately 10 to 15 minutes, depending on whether they are preregistered or a walkup. Insurance payments are collected when appropriate, though screenings are free for those who do not have insurance or can't afford the $150 price. No one is turned away for financial reasons; patients only need to meet certain National Comprehensive Cancer Network guidelines to be screened, according to Headrick.

"Lung cancer doesn't have a preference. Insured and employed as well as uninsured and unemployed individuals were screened. The goal was to increase the number of patients getting screened within our reach," he said.

The cross-trained team included a driver, a CT technician, a program director, nurse practitioner, and a physician. The front of the bus was where the CT scanner was located; whereas the back of the bus was set up for registration and shared decision-making--designed to take the patient out of the screening environment and keep them comfortable. If a physician was on the bus, he/she reviewed the films directly with the patients; otherwise, images were sent wirelessly for immediate, same-day radiologic interpretation. Smoking cessation options also were provided, when appropriate.

The biggest operational challenge identified by the researchers was the service radius. They found that the farther the bus traveled from its home base, the more difficult it was to provide follow-up assistance to patients, especially those with significant findings. Initially, the service area of the Breathe Easy bus was a 2-hour drive from CHI Memorial. However, the team shortened the distance to 1.5 hours, making it easier to manage patients and ensure successful screening events.

"The screening coordinator reached out to church groups, businesses, and other service organizations within communities to set up screening opportunities," said Headrick. "We targeted businesses and health events where the likely age would be 50 years and older. Education and communication before the events were critical. And, the more times the bus returned to the same site, the more successful the event became."

The Breathe Easy bus has now been in operation for more than 2 years, averaging approximately 100 screenings per month, with a goal of 200.In March 2020, the COVID crisis began to impact lung cancer care, causing many primary care practices and hospital-based lung screening programs to close. The Breathe Easy bus, however, continued to perform lung screenings in rural Tennessee and added diagnostic scans for patients in the CHI Memorial nodule surveillance program.

"Many patients were afraid to come to the hospital, but were very willing to go to the bus. It was viewed as a safer environment to get scans," said Headrick. "We only had one patient on the bus at a time while the spouse or next patient waited in their cars. We eliminated the waiting room, cleaned between scans, wore masks, and traveled to the patient. All of this prevented our lung screening program and nodule clinic from shutting down."

A complete original, the Breathe Easy bus took approximately 8 months to build. With engineers from medical technology and motorhome companies, along with a radiologist, pulmonologist, CT technician, and Headrick, the design team worked through various weight, balance, and practical challenges. One major consideration was the fact that CT scanning technology had not been tested on an independently powered, climate-controlled bus platform, especially one that traveled across hundreds of miles and parked on uneven surfaces.

The final cost of the prototype--covered by donated materials and funds from the CHI Memorial Foundation and local nonprofit foundations--was $650,000. A commercially reproducible vehicle is estimated to cost $850,000.

A financial analysis of the project found that the breakeven number of scans for year 1 was 428 scans. The Breathe Easy busy exceeded that by 120 scans (28%), despite only scanning patients during 10 months in 2018.

The Next Phase of the Journey

With lessons learned from the prototype vehicle, a new bus currently is under construction. This bus will include a more advanced CT scanner and coronary calcium scoring capabilities. Unlike the prototype that has a shared entrance and exit, the replacement will have a separate entry and exit way, as well as an improved interior to maximize space and throughput.

The new Breathe Easy bus is expected to be ready in late fall 2020.

"This bus has provided us with the opportunity to help advance lung cancer screening," said Headrick. "It's only through conversations and efforts such as the Breathe Easy program that we are going to erase the stigma surrounding lung cancer and change the survival rates."