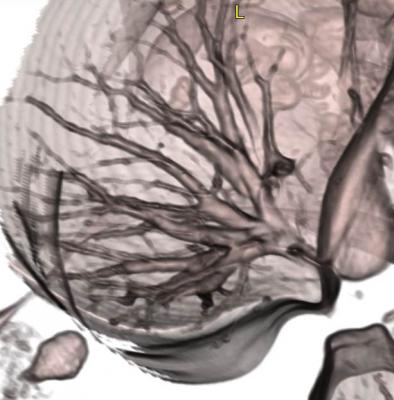 December 23, 2015 — A new national study involving 53,000 patients and 11 institutions compared computed tomography (CT) screens with chest X-rays to determine whether lung cancer in longtime smokers can be caught before it is too late.

“For some patients, the perception is that lung cancer is terminal, but that’s not always the case,” said Christina Bellinger, M.D., a pulmonologist at Wake Forest Baptist Medical Center in Winston-Salem, North Carolina. “Lung cancer screening has proven effective in detecting lung cancer when it’s still in its treatable stage.”

The screening is done with low-dose CT scans that can detect tumors as small as 3/64 of an inch. The process is recommended by the U.S. Preventive Services Task Force, American Cancer Society and numerous other organizations for people age 55 and over with no symptoms of lung cancer who have smoked the equivalent of one pack of cigarettes a day for 30 years and who still smoke or have quit within the past 15 years.

Study results found that the scanning reduced lung cancer mortality by 20 percent in this high-risk population. The results were so conclusive, in fact, that the study was concluded early.

In light of those findings, Medicare and Medicaid earlier this year began paying for the screening for patients who meet their eligibility criteria, and many private insurance companies are also doing so.

“CT scans are the only way to detect lung cancer early,” Bellinger said. “All longtime smokers should discuss screening with their physicians.”

While cigarette smoking rates in the United States have steadily decreased over the past 50 years – from 42 percent among adults in 1965 to around 15 percent today, according to the federal Centers for Disease Control and Prevention – lung cancer remains the leading cause of cancer deaths in both men and women. In 2012, the most recent year for which statistics are available, 210,828 Americans were diagnosed with lung cancer and 157,423 died from the disease.

Not smoking and avoiding second-hand smoke are indisputably the best ways to reduce the risk of lung cancer, and CT screening is not a substitute for quitting smoking. But it is a significant advance in the fight against the disease: It is estimated that the widespread use of CT scans could prevent as many as 12,000 lung cancer-related deaths among the nearly 9 million over-55 smokers and former smokers in the United States.

Chest X-rays, for decades the most commonly employed method of screening for lung cancer, have never proved effective in reducing mortality rates because they generally reveal only larger tumors that are too far advanced to be treated with surgery or radiation therapy.

“CT scanning provides detailed, cross-sectional pictures of the lungs that let us see very small nodules very clearly,” said Michael Holbert, M.D., a cardiothoracic radiologist at Wake Forest Baptist. “This allows us to better differentiate between suspicious, potentially cancerous abnormalities and those that aren’t, and also to follow changes in them over time.”

For the process to be effective in detecting lung cancer at an early stage, patients need to have a scan done annually through at least age 74.

Statistics show that CT scans of 100 people fitting the age and smoking-history profile will detect nodules on the lungs of between 15 and 20 of them. Among these, just one will prove to be malignant. And in 90 percent of these cases, the cancer is at a treatable stage.

The screening itself is quick – the scan is done while the patient holds his or her breath for five to 10 seconds – and noninvasive – no contrast dye is administered and no IV is required. And the radiation dose is extremely low, less than one-fifth that of a routine chest CT scan.

The process does involve some risks, including false positives (indications of cancer when no malignancy is present). And the screening has some limitations: CT scans can not detect all cases of lung cancer, and they may show tumors that are too far advanced to be treated. The scans also may reveal signs of bronchitis, emphysema and other smoking-related conditions at various stages.

But to older longtime smokers, the proven benefits of CT screening should outweigh any negatives.

“Even if patients are still smoking, or if they’re afraid of what a CT scan might show, it’s important that they undergo lung cancer screening as part of their health maintenance,” Bellinger said.

“We have solid scientific data that CT lung cancer screening can save lives,” Holbert said. “It’s a good deal.”