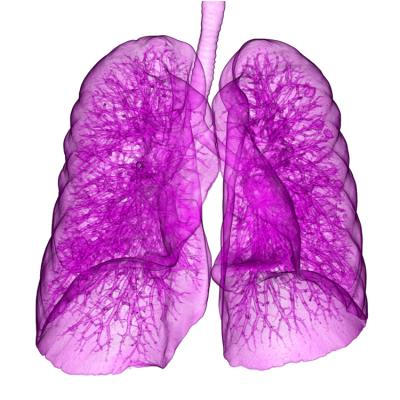 September 25, 2017 — Long-term results of a phase III clinical trial indicate survival rates for patients receiving chemoradiation for unresectable, locally advanced non-small cell lung cancer (NSCLC) may be more than twice as high as previous estimates. At five years following treatment with a standard dose of 60 Gray (Gy) radiation delivered in 30 fractions, the overall survival rate was 32 percent, setting a new benchmark of survival for patients with inoperable stage III NSCLC. The trial, RTOG 0617, also confirms that a standard dose of radiation therapy is preferable to a higher dose and that cetuximab offers no additional survival benefit for these patients. Findings were presented at the 59th Annual Meeting of the American Society for Radiation Oncology (ASTRO), Sept. 24-27 in San Diego.

Lung cancer claims the most cancer-specific deaths of any tumor type, both in the United States and worldwide. The American Cancer Society, using data from the National Cancer Institute, estimates five-year survival rates of 5 to 14 percent for patients who present with stage III NSCLC. RTOG 0617 was a phase III randomized trial that compared a standard radiation therapy dose of 60 Gy in 30 fractions with a higher dose of 74 Gy in 37 fractions for patients receiving concurrent chemotherapy with or without cetuximab for inoperable stage III lung cancer.

“Based on the two-year results reported in 2015, RTOG 0617 has already changed practice and established the standard radiation dose for patients receiving chemoradiation for stage III NSCLC,” said Jeffrey D. Bradley, M.D., FASTRO, the principal investigator of the RTOG 0617 trial and a professor of radiation oncology and director of the S.L. King Center for Proton Therapy at the Washington University School of Medicine in St. Louis.

“When RTOG 0617 was initially reported, the results were surprising to most oncologists because the standard dose of 60 Gy was superior to the higher dose of 74 Gy in this setting. There have been numerous secondary analyses investigating the reasons for this result, and the data point toward greater radiation exposure to the heart in the high-dose arm being the main problem,” he added.

“The current report establishes an overall five-year survival standard for patients receiving standard- dose chemoradiation for stage III NSCLC that is substantially higher than previously estimated. This report also confirms that using a higher radiation dose is not beneficial and can lead to detrimental outcomes including lower survival rates and increase side effects,” Bradley concluded.

Across the 185 institutions in the United States and Canada that participated in RTOG 0617, a total of 544 patients with unresectable stage III NSCLC were accrued and 496 were eligible for analysis. The median patient age was 64 years (interquartile range [IQR] 57-70 years). Most patients were male (59 percent) and white (41 percent).The median follow-up for surviving patients was 5.1 years (IQR 4.6 – 6 years).

Cetuximab (delivered as a 400-milligram dose on day one, then 250-milligram doses weekly thereafter) did not confer a benefit for overall survival at five years. Median OS for patients who received cetuximab was 24 months (95% CI 20.4 - 30 months), compared with 24 months (95% CI 20.5 - 28.8 months) for those who did not (HR 1.0, p = 0.048). Moreover, there was no benefit of cetuximab for patients with epidermal growth factor receptor (EGFR) H-scores above 200, counter to earlier findings from the trial.