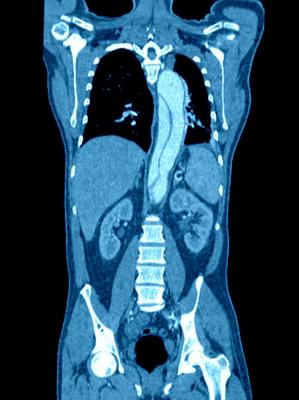 "Over 80 million doses of IV contrast media are administered every year, and in the emergency department it can be essential to accurately diagnose certain acute critical conditions," said lead study author Jeremiah Hinson, M.D., Ph.D., of Johns Hopkins University School of Medicine in Baltimore. "But physicians have had concerns that the contrast media causes serious kidney problems later on, with some studies showing contrast-induced nephropathy occurring in as many as 14 percent of patients receiving it. However, studies used to establish this risk were performed prior to the development of modern contrast reagents or without adequate controls. Using a controlled design in current context, we could not find an association between intravenous contrast media use and acute kidney injury."

"While a well-controlled randomized prospective study is required to fully determine the contribution of intravenous contrast media to the development of acute kidney injury, our results clearly demonstrate that in emergency departments such as ours where practice patterns have evolved to protect patients' kidneys, contrast media is not associated with increased risk of kidney injury," said Hinson. "Our data also suggest that in cases where contrast-enhanced CT is indicated to avoid delayed or missed diagnosis of critical disease, the potential morbidity and mortality resulting from a failure to diagnose potentially life-threatening conditions likely outweigh any potential risk of kidney injury.”