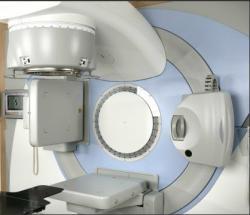 May 7, 2012 — Prime Minister of India Manmohan Singh honored the Bhubaneswar Borooah Cancer Institute (BBCI) by presiding over the inauguration of its Elekta Synergy linear accelerator on April 20 in Guwahati in the Indian state of Assam. The Synergy system joins BCCI's first Elekta treatment system, which was installed in 2000. Established in 1973, the BBCI is among the leading cancer institutes of east India and was recognized as a Regional Cancer Centre in 1980.

"It was very gratifying to have an influential public figure such as Dr. Singh recognize the importance of increasing access to medical technology in India — which will hopefully influence the decision-making process at other regional hospitals that are seeking to invest in linear accelerators," said Brendhan Vahey, managing director, Elekta India.

Elekta and other healthcare providers have partnered with medical centers and clinics across India to address a serious shortage of radiation therapy equipment. India's population of 1.21 billion significantly dwarfs the number of radiotherapy systems available to its residents, Vahey adds.

"To match a developed nation's ratio of inhabitants to linear accelerators alone, India would need about 10 times as many treatment systems," he said. "Fortunately, the Indian radiation therapy market is growing at an unprecedented rate — over 15 percent per year — almost double its current GDP growth."

In Assam, head-and-neck cancer and tobacco-related cancers (mainly lung cancer) comprise 15-20 percent of total cancers. Among males, the top three cancer incidences are oral cavity, larynx and lung cancer, while in women, cervical and breast cancers are the most common. In metro areas, prostate and breast cancer incidences are rising. At any given time in India, there are about three million individuals who have cancer, with approximately 960,000 new cases identified per year. A national task force estimates that two-thirds of those diagnosed with cancer will need radiation therapy.

"We will continue to see a tremendous need for cancer care in India for many years to come," Vahey said. "As a leading supplier of comprehensive solutions for cancer management in India, it is Elekta's responsibility to work closely with healthcare professionals to make these advanced solutions available to the public."