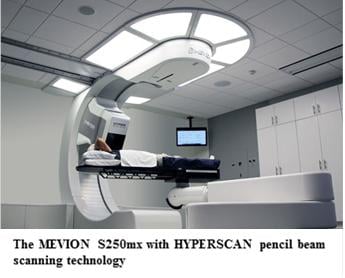 Mevion Medical Systems announced that University Hospitals (UH) in Cleveland used the Mevion S250 proton therapy system to treat its first patient, a 24-year-old woman with rhabdomyosarcoma, a rare form of sarcoma. The proton therapy treatment made history by being the first in the state of Ohio.

“At UH, we aim to provide the most advanced cancer treatment options, and the addition of our Mevion S250 furthers our commitment to bringing the best cancer care possible to our patients” said Nathan Levitan, M.D., president of UH Seidman Cancer Center. “We are particularly excited by the fact that this will be one of the few proton therapy centers in the world to be physically connected to a children’s hospital, so both children and adults will be able to benefit from the unmatched precision of proton therapy.”

Proton therapy is an advanced form of radiation that targets tumors more directly than traditional radiation, potentially limiting damage to surrounding healthy tissue and organs. This makes proton therapy the ideal treatment for tumors in sensitive areas such as near the eye, brain, spine, heart and lungs. The Mevion S250 at UH will be used for clinical research that will further explore the advantages of proton therapy.

“Mevion is proud to partner with UH Seidman Cancer Center to open the first proton therapy system in Ohio,” said Joseph K. Jachinowski, president and chief executive officer of Mevion Medical Systems. “Our mission is to make proton therapy accessible to all cancer patients, so we’re thrilled that patients and their families in Ohio will no longer be forced to leave the state in order to receive this life saving treatment.”

The Mevion S250 at UH Seidman Cancer Center is Mevion’s fifth clinically operational system and its third at an NCI-Designated Comprehensive Cancer Center.