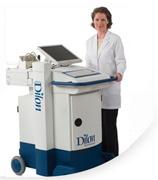 April 13, 2011 – The U.S. Department of Energy has highlighted Dilon Diagnostics as a success story in the field of medical technology and innovation for commercializing the technologies of the national laboratories. According to the government agency, Dilon and similar entrepreneurs, "build the new industries of the 21st century, and help solve some of our toughest global challenges."

The Dilon 6800 digital gamma camera is based on gamma-imaging technology developed at the U.S. Department of Energy's Thomas Jefferson National Accelerator Facility in Newport News, Va. The imaging technology enables the Breast-Specific Gamma Imaging/Molecular Breast Imaging (BSGI/MBI) procedure and reveals cancerous lesions even at very early stages. BSGI/MBI is a proven technology that can find cancers missed by mammography and ultrasound.

"We are honored to be acknowledged by the Department of Energy as one the country's successful innovators in the medical technology field," said Bob Moussa, president and CEO of Dilon. "We have been able to make a significant impact by utilizing our licensing agreement with Jefferson Lab to help save lives."

More than 250,000 patients have been screened with BSGI/MBI on a worldwide basis.

As a follow-up to mammography, BSGI/MBI helps physicians see the breast more clearly and differentiate benign from malignant tissue. To perform BSGI, the patient receives a pharmaceutical tracing agent that is absorbed by all the cells in the body. Due to their increased rate of metabolic activity, cancerous cells in the breast absorb a greater amount of the tracing agent than normal, healthy cells and generally appear as dark spots on the image.

The procedure is especially valuable after a questionable mammogram. This can occur when patients have dense breast tissue; implants; multiple suspicious lesions or clusters of microcalcifications; palpable lesions that can be felt but not detected by mammography or ultrasound; post-surgical or post-therapeutic mass; or if they have been taking hormone replacement therapy.