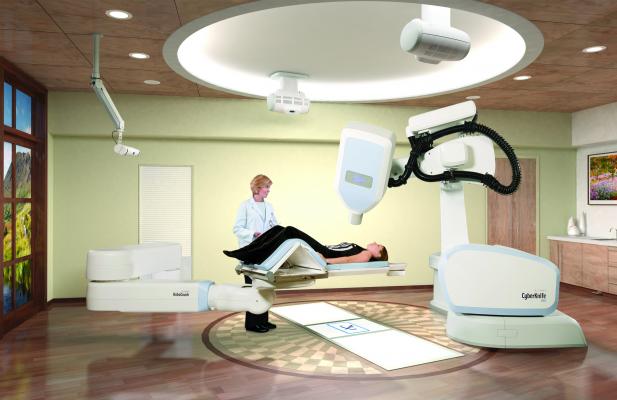 February 17, 2017 — Accuray Inc. recently announced data from a prospective, Phase II, 17-center study which showed that treatment with the CyberKnife System for low- and intermediate-risk prostate cancer provides excellent long-term results. At five years, the disease-free survival rate for low-risk prostate cancer patients was 100 percent and for intermediate-risk patients was 88.5 percent. These results were maintained by patients followed for seven years.

The study was presented at the American Society of Clinical Oncology Genitourinary Cancers Symposium (ASCO GU) Feb. 16-18, 2017, in Orlando, Fla.

A low prostate-specific antigen (PSA) value is associated with a reduced risk of cancer recurrence or metastases. The lower the PSA value and the longer it continues to decline, the greater the patient's likelihood of achieving long-term disease free survival1. According to the study, the five-year median PSA was 0.1 ng/mL for low- and intermediate-risk prostate cancer patients receiving stereotactic body radiation therapy (SBRT) administered with the CyberKnife System. The median PSA value subsequently decreased to 0.035 ng/mL at the seven-year mark for patients followed to this time point.

All patients participating in the study were treated with the CyberKnife System. Seventeen institutions analyzed 259 prostate cancer patients; 112 low-risk and 147 intermediate-risk. Patients received an HDR-like heterogeneous dosing regimen of 38 Gy/four fractions delivered by the CyberKnife System. The primary study objectives were to determine biochemical disease free survival (bDFS) and measure the rates of acute and late genitourinary and gastrointestinal toxicities following treatment, and to compare the CyberKnife System bDFS rates to published HDR brachytherapy bDFS rates reported in the literature.

Unique aspects of this study included:

The CyberKnife System was designed to deliver SBRT, a treatment process enabling the delivery of radiation throughout the body with an extremely high degree of precision. The system's ability to continually track and automatically correct for movement of the prostate in real-time throughout the entire treatment session provides distinct advantages when treating a tumor which can move as much as 10 mm in as little as 30 seconds2.

"Outcomes from this long-term, prospective study reinforce that CyberKnife prostate SBRT is highly effective, with typically minimal side effects and impact on quality of life during and after treatment," said Donald B. Fuller, M.D., at Genesis Healthcare Partners in San Diego, and lead investigator of the study. "It is important to note that nearly 90 percent of patients in the study were treated at community facilities across the United States, which may provide reassurance for men with localized prostate cancer that the results are achievable in their community setting."

The study evaluated a dosing regimen which emulated a high-dose brachytherapy (HDR) plan. It demonstrated that: