The CyberKnife System Provides an Alternative for Lung Cancer Patients 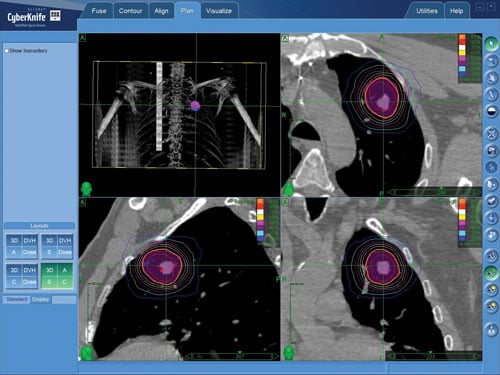 O-view: A 3-D, axial, sagittal and coronal view of the treated area highlighted in pink, as well as radiation dose shown in multicolored isodose lines.

Erlanger Health Systems in Chattanooga, Tenn., purchased a CyberKnife Robotic Radiosurgery System in December 2010 to develop a stereotactic body radiation therapy (SBRT) program in its Radiation Oncology Department. The CyberKnife System included the Lung Optimization Treatment (LOT) function, which provides fiducial-free SBRT of early-stage lung cancer patients. Once the CyberKnife System was in use, the clinical team at Erlanger collaborated with referring physicians to explain to thoracic surgeons and pulmonologists — at Erlanger and other hospitals in the community — how the system could be utilized as a treatment option for their patients.

The CyberKnife LOT function offers several solutions for patients with lung tumors, including the 2-View option. The 2-View tracking solution uses both of the system’s mounted cameras to track tumor motion during treatment. This function was used to treat a 70-year-old female whose cancer had returned after previous therapy. She received treatment three-and-a-half years prior with conventional radiation therapy to 6,480 cGy over the course of 36 fractions. In addition, four cycles of Taxotere and Carboplatin had been administered neoadjuvantly. However, PET/CT showed a 1.8 cm hypermetobolic nodule in the right medial lung base.

Surgical solutions and conventional radiation therapy were not options for this recurrence, so physicians agreed that SBRT was an excellent opportunity to eradicate or provide long-term suppression to the area of recurrence.

Based on the 2-View LOT protocol, a prescription dose of 6,000 cGy was prescribed to the 82 percent isodose line and delivered over three fractions utilizing 111 non-coplanar beams.

Eight months after treatment, a CT scan showed no residual tumor in the medial right lobe.

Another treatment protocol available with Erlanger’s CyberKnife System is the 1-View LOT function. The 1-View LOT protocol uses one of the CyberKnife’s two orthogonally mounted cameras to enable fiducial-free, real-time adjustment of the beam to the respiratory motion of the tumor. This protocol was utilized for a 70-year-old woman with medically inoperable, stage I, poorly differentiated large cell carcinoma of the right/mid upper lobe at the hilum. She was not a surgical candidate due to poor pulmonary function, and physicians did not believe that she would tolerate conventional radiation therapy. However, foregoing therapy had an associated risk of progression and lymphatic spread, which could occur within a matter of months.

Physicians chose to treat the patient with non-invasive SBRT. While side effects, including coughing and chest wall or rib tenderness are possible, the probability for this patient was low due to the location of the tumor.

Based on the 1-View LOT function, the treatment plan was developed using the MultiPlan Treatment Planning System, and a dose of 5,400 cGy was prescribed to the 82 percent isodose line and delivered over four fractions, utilizing 98 non-coplanar beams. Each fraction lasted approximately 36 minutes.

Aside from reports of fatigue one week after completion of treatments, the patient had no complaints. Seven months post-treatment, the patient reported doing well. She was not on oxygen and indicated she had no shortness of breath. The treated lesion was no longer visible in CT scans taken at three- and six-month follow-ups.

The third LOT function that Erlanger uses with its CyberKnife System is the 0-View option. The 0-View LOT protocol is used when a tumor cannot be clearly identified by either of the CyberKnife’s two X-ray cameras. Erlanger used this feature with a 72-year-old male patient with a stage I lung cancer in the left upper lobe. His doctor had discussed surgical options, including lobectomy and mediastinal nodal sampling, as well as wedge resection. But the patient was considered a marginal operative risk and he wanted to explore less invasive interventions.

Physicians suggested SBRT as a non-invasive alternative to surgery. SBRT using the CyberKnife System is equivalent to surgical wedge resection with respect to local control. Additionally, the LOT treatment would not require placement of any fiducials and was unlikely to cause adverse side effects given the location of his lesion.

Based on the 0-View LOT protocol, the clinical team utilized both inhale and exhale CT datasets to design a treatment plan on the MultiPlan Treatment Planning system. The tumor excursion was measured and PTV margins drawn to account for the extent of tumor motion.

The patient was treated using the CyberKnife’s automated IRIS Variable Aperture Collimator. A prescription dose of 6,000 cGy was prescribed to the 81 percent isodose line and delivered over three fractions, lasting approximately 24 minutes each, utilizing 77 non-coplanar beams. Aside from reports of fatigue about a week after his final treatment, the patient had no complaints. One year after treatment, at his follow-up visit, the patient was still doing well with no distress.