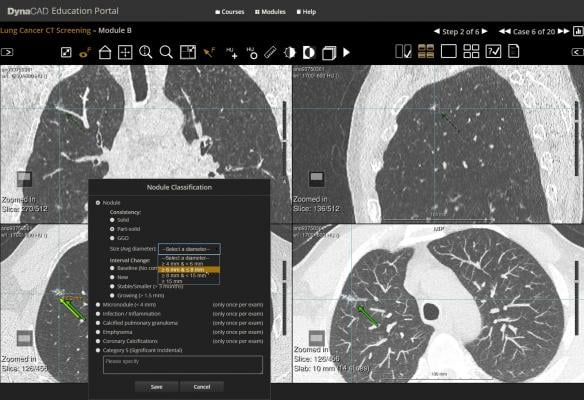 July 18, 2016 — Annual low-dose computed-tomography (CT) screening can eliminate the need for biopsy or surgery in nonsolid lung nodules, according to a new study published online in the journal Radiology.

Nonsolid nodules (NSNs) are usually asymptomatic growths in the lung. Their name derives from the fact that the normal lung tissue is visible through the nodule on a CT image. NSNs are becoming a more common finding in the wake of recent guidelines from the Centers for Medicare & Medicaid Services (CMS) that recommend annual CT screening for longtime smokers. Surgical removal is one treatment option, even though NSNs are rarely life-threatening.

“When you biopsy a nonsolid nodule, it’s usually pre-malignant, noninvasive, or due to some other cause like infection or fibrosis,” said study co-author Claudia I. Henschke, M.D., Ph.D., from the Department of Radiology at Icahn School of Medicine at Mount Sinai in New York City.

In a study published previously in Radiology, Henschke and colleagues analyzed data from more than 57,000 participants in the International Early Lung Cancer Program (I-ELCAP), a worldwide initiative aimed at reducing deaths from lung cancer. They concluded that NSNs of any size could be followed with annual repeat CT scans, as any cancers found were at a very early stage and deaths among the study group were not due to those cancers.

For the new study, the researchers attempted to validate the I-ELCAP findings by looking at data from the National Lung Screening Trial (NLST), a large trial that compared low-dose CT with chest X-ray for lung cancer detection. They searched the NLST database to identify all participants who had at least one NSN on a CT scan and subsequently died of lung cancer.

Among the 26,722 participants, 2,534, or 9.4 percent, had one or more NSNs. Of those, 48 died of lung cancer. Twenty-one of the 48 had no NSN in the cancerous lobe of the lung. A review of the remaining 27 cases found that death was unlikely to be caused by the NSN, as long as annual follow-up was done.

“The causes of death in this group were likely due to another solid or part-solid nodule in the same lobe of the lung,” said study lead author Rowena Yip, MPH, senior biostatistician at Icahn School of Medicine at Mount Sinai. “In the one death related to a growing nonsolid nodule, the time from prior CT to diagnosis was greater than three years.”

The new findings, along with previous research, could help spare patients from the costs, complications and stress of unnecessary biopsy and surgery.

“We think that we have enough data now to say that these nodules can safely be followed by annual CT scans and do not have to be biopsied or treated right away,” Henschke said. “Survival remains 100 percent as long as the nodules remain nonsolid, and for those that ultimately do progress, the one-year follow-up interval is short enough that they still remain entirely curable.”

Some NSNs go on to develop solid components, a change associated with a higher risk of being invasive cancer. The Mount Sinai researchers plan to study these part-solid nodules to learn more about optimal screening intervals and help improve the odds for people with lung cancer, the leading cause of cancer death in both men and women. Current screening guidelines cover only about 18 percent of people who end up dying from lung cancer, Henschke said, and leave out an important group: people who have had long-term exposure to secondhand smoke.

“We’re hoping that by making screening more efficient we will convince CMS to slowly broaden the guidelines to include others at risk, including those exposed to secondhand smoke,” Yip said.