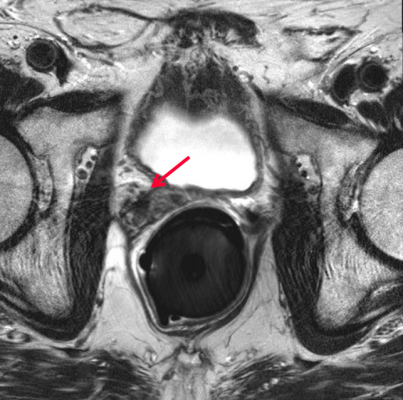 The first report of a large, international clinical trial shows that, for men who show signs of prostate cancer after surgical removal of their prostates, extending radiation therapy to the pelvic lymph nodes combined with adding short-term hormone therapy to standard treatment can extend the amount of time before their cancer spreads. The findings, presented today at the 60th Annual Meeting of the American Society for Radiation Oncology (ASTRO), were so encouraging —exceeding rigorous threshold criteria — that the results were released by the research team ahead of schedule.

Men with prostate cancer who are initially treated with prostatectomy — surgical removal of the prostate gland — often face signs of recurrence, usually signaled by a rise in the level of prostate specific antigen (PSA) in the blood. Radiation therapy to the region of the prior prostate surgery (surgical bed) is standard but only effective at keeping PSA low longer than five or more years in 60 to 70 percent of patients, said the study’s lead author, Alan Pollack, M.D., Ph.D., Chair of radiation oncology at the University of Miami and deputy director of the Sylvester Comprehensive Cancer Center.

While a rise in PSA after prostatectomy signals that the cancer is still present, it does not indicate where the cancer is located.  The NRG Oncology/RTOG 0534 SPORRT clinical trial is the first randomized trial to show that radiation therapy to treat the pelvic lymph nodes in addition to standard prostate bed results in significant incremental gains for these patients.

“We looked specifically at men with prostate cancer who began to show signs that the cancer was not completely eradicated after prostatectomy,” said Pollack. “Adding hormone therapy and pelvic lymph node treatment substantively increased the proportion of patients who remained free from disease progression, to the point that we could report the data after an early interim analysis. The degree of the effectiveness of the combination is surprising, but makes sense when you consider other more contemporary evidence using newer PET scanning methods showing that pelvic lymph node recurrences are more common than previously appreciated.”

The SPPORT trial enrolled 1,792 men at centers in the U.S., Canada and Israel from 2008 to 2015. Eligible patients had persistently detectable or rising PSA levels and evidence that some cancer cells were left behind after prostatectomy in the prostate bed, pelvic lymph nodes or elsewhere in the body after prostatectomy. The median patient age was 64 years (range 39-84), most patients (87 percent) were Caucasian, and the men had generally favorable performance status aside from rising PSA.

The trial was designed to assess freedom from disease progression at five years following treatment. Findings from a scheduled interim analysis when 1,191 patients had been followed for five years triggered the early release of the findings, explained Pollack. “The level of significance reached at this point was considerable, making it unlikely that the results will change substantively with longer follow-up, although outcomes such as the rates of distant metastasis and survival require much more patient follow-up, ” he said. “Releasing the data at this juncture is important for physicians treating patients with a rising PSA following prostatectomy. The strategy of combining prostate bed and pelvic lymph node radiation therapy with short-term hormone therapy should be much more strongly considered in routine clinical practice than it is currently.”

At five years following treatment, freedom-from-progression (FFP) rates in the interim analysis group were 71.7 percent for PBRT alone, 82.7 percent for PBRT+ADT and 89.1 percent for PLNRT+PBRT+ADT. The FFP rate was highest for the arm combining all three treatments (p<0.0001). Freedom from progression was defined as a PSA nadir of +2, clinical failure or death from any cause, and was nearly identical for across study groups.

“While it’s common practice to treat the lymph nodes in men with higher-risk prostate cancer treated without prostatectomy first), this study is the most convincing level-I evidence to demonstrate a benefit,” noted  Pollack. “To be seeing differences in distant metastasis with relatively short follow-up speaks to the robustness of the impact, suggesting that the results will be sustained with longer follow-up.”

Another key finding of the SPPORT trial is that short term hormone therapy (also called androgen deprivation therapy or ADT) is a key component of the management of patients with signs of recurrence after prostatectomy. SPPORT is only the second trial to look specifically at adding short-term hormone therapy to radiation for men following prostatectomy, added Pollack. “There is a lot of data showing a benefit from adding short-term hormone therapy in men whose prostate hasn’t been removed, though only one other randomized trial — GETUG 16 — has shown significant improvements after prostatectomy. Our study confirms that adding STAD to PBRT following surgery extends the time to progression.”

Rates of severe side effects (grade three or higher using CTCAEv3.0) were low across treatment groups. During treatment, the main additional severe effects from PLNRT were in relation to blood/bone marrow events. For long-term effects, blood/bone marrow events were also slightly higher in the PLNRT arm, but only grade 2+ events (4.1 percent), not grade 3+ (1.1 percent).

Additional analyses of the SPPORT trial will focus on the magnitude of difference between the experimental treatment arms to isolate the impact of pelvic lymph node treatment relative to androgen deprivation therapy. The research team also described preliminary data that for those with a very low PSA on study entry, there was no improvement from PLNRT+PBRT+STAD over PBRT+STAD;  although, this was an unplanned analysis.

“It’s now a question of management, of whether a PSA threshold or other factors can be used to identify a patient group in which pelvic lymph node treatment is not as beneficial,” concluded Pollack. “Moreover, the role of newer PET tracers that identify pelvic lymph node involvement earlier in this decision process remains a key question. We still need more data, but we’ve taken a significant step forward with this study.”

Purpose/Objective(s): To determine in a three-arm randomized trial whether there are incremental gains in freedom from progression (FFP) from the addition of 4-6 months of short term androgen deprivation therapy (STADT) using antiandrogen plus an LHRH agonist, without or with pelvic lymph node treatment (PLNRT), to prostate bed salvage radiotherapy (PBRT).

Materials/Methods: Patients were randomized to PBRT alone (Arm 1), PBRT + STAD (Arm 2), and PLNRT + PBRT + STAD (Arm 3). The FFP primary endpoint included PSA nadir+2, clinical failure, or death from any cause, with censoring for secondary salvage therapy initiated prior to these events. The sample size provided 90% statistical power to detect a 10% absolute FFP improvement at 5 yr in Arm 2 compared to Arm 1 and a 10% absolute improvement at 5 yr in Arm 3 compared to Arm 2 at an overall alpha level of 0.025. On the third planned interim analysis for efficacy and futility based on 1191 eligible patents with 5 yr minimum follow-up, the treatment arms were compared in a stepwise approach to determine if the Haybittle-Peto (HP) threshold boundary of p < 0.001 (one sided) was crossed. Futility evaluation tested the alternative hypotheses at p < 0.001. Adverse events were graded using CTCAEv3.0.

Conclusion: This is the first report of the primary endpoint and is the first randomized trial to show significant incremental improvements in FFP going from PBRT only to PBRT+STAD to PLNRT+PBRT+STAD. The addition of PLNRT resulted in early, meaningful, reductions in failure. Follow-up of patients will further elucidate the magnitude of the differences between arms 2 and 3.