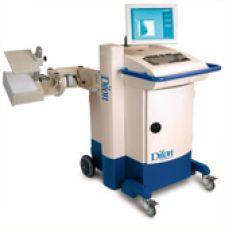 March 18, 2009 - Women who require additional diagnostic imaging after a questionable mammogram may be at risk for unnecessary biopsies when only MRI is offered, according to a new study presented this week at NCBC 2009. "Our goal was to see if BSGI could be used to improve upon the specificity of MRI, and also reduce the number of biopsies. The study is important because with the addition of BSGI, we could eliminate the need for 50 percent of biopsies or possibly change a patient's decision to have more radical surgery," said Leora Lanzkowsky, M.D., director of women's imaging, CHW - Nevada Imaging Centers in Las Vegas. BSGI reportedly has comparable sensitivity but superior specificity when compared to MRI. Sensitivity refers to the ability of an imaging technique to detect the presence of disease. Specificity refers to the technique's ability to detect that disease is actually not present. BSGI, a molecular breast imaging technique, is a follow-up to mammography that can see lesions independent of tissue density and discover early stage cancers. With BSGI, the patient receives a pharmaceutical tracing agent that is absorbed by all the cells in the body. Due to their increased rate of metabolic activity, cancerous cells in the breast absorb a greater amount of the tracing agent than normal, healthy cells and generally appear as "hot spots" on the BSGI image. The Dilon 6800 Gamma Camera is a high-resolution, compact gamma camera, optimized to perform BSGI. The camera provides a manageable four to 16 images versus up to thousands of images with breast MRI. Over the course of 18 months, at three medical centers, BSGI and MRI were performed in women requiring additional diagnostic imaging following a mammogram as deemed necessary by a physician. The majority of these patients had either a personal history of breast cancer or a combination of other factors placing them at high-risk for breast carcinoma. The interpreting radiologist had access to all prior images and patient information for image interpretation for both studies. All biopsies were performed as deemed necessary by a physician. There were 120 women who had 122 abnormal biopsies requiring additional intervention. There were a total of 16 high-risk lesions (11 ADH, four LCIS and one papilloma) and 106 malignant lesions (17 DCIS, 70 IDC, 14 ILC, three papillary carcinomas, one tubular and one squamous cell carcinoma). BSGI was negative in a total of 10 cases (six malignancies and four high risk lesions) and indeterminate in three (all malignancies). MRI was negative in a total of 11 cases (seven malignancies and four high risk lesions) and indeterminate in six (three malignancies and three high-risk lesions). Excluding the indeterminate findings from the sensitivity analysis, BSGI was positive 110/120 cases (90.6 percent sensitivity) and MRI was positive in 106 out of 117 cases (90.6 percent sensitivity). BSGI was equal in sensitivity to breast MRI in the detection of malignant and high-risk breast lesions, while reducing the rate of indeterminate findings by 50 percent. Of the 37 patients who had benign biopsy results, MRI and BSGI were concordant in 16 patients yielding a specificity of 38 percent. For the patients with discordant MRI and BSGI findings, BSGI specificity was 52 percent while MRI had a specificity of 19 percent. Overall, the specificity for BSGI and MRI were 46 percent and 27 percent respectively. "If we can utilize BSGI to avoid unnecessary biopsies, not only are we saving women from an uncomfortable procedure, scarring and the expense of surgery, we save time so patients can move more quickly to treatment," said Dr. Lanzkowsky. “In this group of patients with complex radiographic findings requiring both BSGI and MRI in the course of clinical care, BSGI provided comparable sensitivity, higher specificity and fewer indeterminate results than MRI." For more information: www.dilon.com