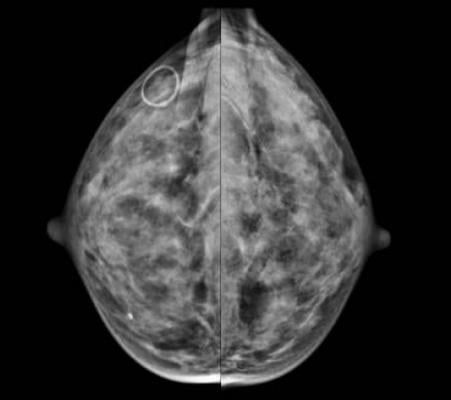 February 9, 2017 — Breast cancer patients with dense fibroglandular breast tissue have almost a two-fold increased risk of developing disease in the contralateral breast, according to new research from The University of Texas MD Anderson Cancer.

The study, published in the journal Cancer, is among the first to find the association between breast density (BD) and contralateral breast cancer (CBC).

According to study author Isabelle Bedrosian, M.D., a big challenge in the management of this patient population, especially as they are making surgical decisions, is trying to counsel women appropriately on their risk of developing breast cancer in the other breast.

"We know there are a number of well-established influences for developing both primary and secondary breast cancers, such as BRCA mutations, family history and the tumor's estrogen receptor status," explained Bedrosian, associate professor, breast surgical oncology. "We also know density is a risk factor for the development of primary breast cancer. However, no one has closely looked at it as a risk factor for developing contralateral disease."

The estimated 10-year risk for women with breast cancer developing CBC can be as low as 2 percent, and as high 40 percent, said Bedrosian. The dramatic range is due in large part to the variability of risk factors across the patient population, she explained.

For the retrospective, case-controlled study, the researchers identified 680 stage I, II and III breast cancer patients, all treated at MD Anderson between 1997 and 2012. BRCA patients were excluded from the study, given their known increased risk of CBC.

Women with an additional diagnosis of metachronous CBC — defined as BC in the opposite breast diagnosed more than six months after the initial diagnosis — were the "cases," and patients who had not developed CBC were the "controls." Cases and controls were matched on a 1:2 ratio based on a number of factors, including age, year of diagnosis and hormone receptor status.

"With our research, we wanted to evaluate the relationship between the mammographic breast density of the original disease and the development of metachronous breast cancer," said Carlos Barcenas, M.D., assistant professor, breast medical oncology, and the study's corresponding author.

Of the selected patients, 229 were cases and 451 were controls. The MD Anderson researchers categorized each patient's breast density by mammogram reading, assessed at the time of first diagnosis, as "nondense" or "dense," using the categorizations from the American College of Radiology.

"Our findings have valuable implications for both newly diagnosed patients with dense breasts and for breast cancer survivors as we manage their long-term risk of a secondary diagnosis," said Barcenas. "Our future goal is to develop a risk model incorporating breast density to best assess a breast cancer survivor's risk of developing CBC."

In the long-term, the researchers hope to use this tool to counsel patients on their personal risk and their options for treatment and surveillance, if their risk is sufficiently high.

This is an example of 3-D ultrasound imaging on a breast, designed to help increase efficiency and diagnostic accuracy in any practice. Image courtesy of Hologic.