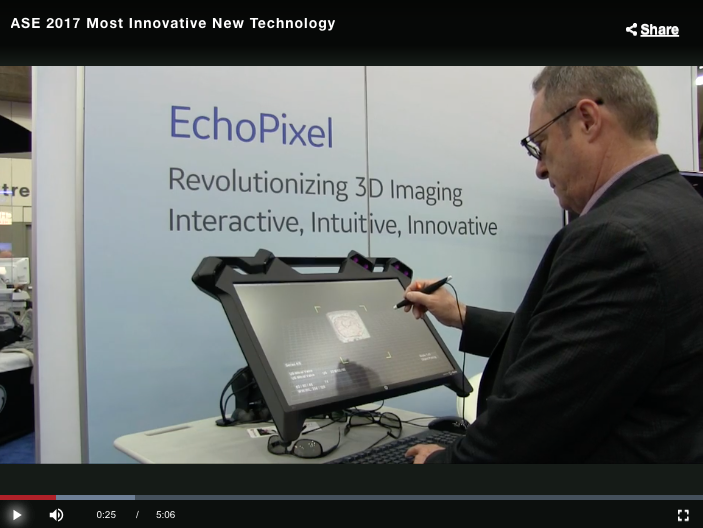 As technology moves forward, so does the evolution of consolidating multiple “ologies” into a system-neutral repository to create a comprehensive package for all imaging needs in radiology, cardiology and various other ologies as well. Imaging Technology News (ITN) and its sister publication Diagnostic and Interventional Cardiology (DAIC) often see the blending of the ologies at numerous trade shows throughout the year.

For example, several elements of what will likely make up the next generation of echocardiography imaging systems, that also bridge with radiology, were showcased at the American Society of Echocardiography (ASE) 2017 scientific sessions in June. One new imaging technology is true 3-D imaging offered by EchoPixel. The technology allows 3-D image datasets to be displayed in actual 3-D from computed tomography (CT), magnetic resonance imaging (MRI) and 3-D ultrasound. The company displayed conceptual imaging in development with GE Healthcare at ASE 2016 and at the American College of Cardiology 2017. The companies announced at ASE they now have a formal co-development agreement to make true 3-D imaging available for echo in the near future.

EchoPixel says it is working with a display vendor for 3-D screens that will eliminate the need to wear special glasses. The EchoPixel technology currently is only available as post-processing, so it cannot be used for live procedures yet.

Philips Healthcare was the first to introduce elements of artificial intelligence (AI) algorithms on its Epiq ultrasound system a couple years ago. It takes a 3-D echo dataset acquisition and automatically analyzes the image to identify the heart’s anatomy, labels it and then slices the optimal standard views for presentation. This eliminates issues with interoperator variability, because the software will always choose the optimal views based on machine learning, which uses thousands of prior exams representing the spectrum of patient anatomical variations. This would take years for a human operator to accumulate the same knowledge. Other vendors also have introduced elements of deep learning algorithms to help analyze echocardiograms or perform auto quantifications. Next generation echo systems will incorporate more AI features to further improve workflow by auto-completing time-consuming tasks and augmenting the sonographer so they can become more efficient and consistently accurate.

Many of the imaging system vendors are either developing their own AI or partnering with AI vendors. Siemens Healthineers announced a partnership with IBM Watson earlier this year at HIMSS 2017. GE Healthcare announced in May it is working with Partners HeathCare, which will be executed through the newly formed Massachusetts General Hospital and Brigham and Women’s Hospital Center for Clinical Data Science. Mass General has been developing its own AI system for radiology. In addition to its Epiq echo software, Philips also developed its own AI to support and enhance its IntelliSpace Enterprise medical imaging informatics platform, which is smart enough to pull all the patient’s relevant prior exams for the same anatomy and open the images in the exact same view as the current exam.