Advanced Visualization and the Future of MR 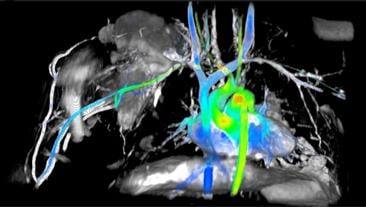 There is something about magnetic resonance (MR). The elegance of its mathematics. How it leverages the electromagnetic spectrum and the concepts of quantum mechanics. Certain … and uncertain. MR is the cat inside Schrödinger's box.

The nature of MR pairs it perfectly with advanced visualization, the acquisition of radio signals sent by atoms, transformed into images of tissue inside the body.

It is little wonder that the future of this modality — more than any other — is being defined by progress in software and the advanced visualization that naturally follows.

GE Healthcare is leveraging a “GPU smart cloud platform” as the means for post-processing MR cardiac. The company’s ViosWorks promises a comprehensive and practical means for providing cardiac anatomy and function. While the company claims the scan might be completed in as little as eight minutes, with the patient breathing freely, scans in reality may take up to 20 minutes. They will not, however, require a technologist expert in the performance of the scan or highly and especially trained clinicians, according to GE. The company, in fact, is framing exams with ViosWorks as simplified and requiring no particular supervision.

Toshiba’s dedicated MR sequence for pulmonary imaging is another example of the unique relationship between MR and advanced visualization. This sequence, called ultrashort echo time (UTE), visualizes what is all but invisible using conventional MR. Pulmonary images obtained using UTE were remarkably similar to those obtained of the lung using CT, as indicated by images from the two modalities placed side-by-side at the last RSNA.

The growth potential of these applications — MR lung in place of CT; MR cardiac in place of cardiac cath — is obvious in this age of heightened concern about exposing patients to ionizing radiation.

New techniques and protocols for MR abdominal scanning, as well as for the prostate, promise to increase procedure volume above and beyond historical trends. Ditto for time-saving protocols, such as Siemens’ GoBrain and Simultaneous Multi-Slice (SMS), which the company claims will dramatically reduce the time needed for MR brain scans. (GoBrain provides validated “push-button” brain exams that can be done in five minutes; SMS acquires human slices simultaneously rather than sequentially, as is done conventionally.)

Variants of Philips’ mDIXON provide images with multiple contrasts, each coming from a single scan; Philips’ ScanWise Implant, that reduce or eliminate artifacts, while optimizing scan time through the use of an MR-guided user interface and automatic scan parameter selection. (ScanWise is designed specifically for patients with knee, hip and spine implants, as well as pacemakers.)

Less well known but commercially available are software packages that localize cancer tumors for use in MR-based simulations of radiotherapy. A product available from GE, AdvantageSim MD, includes iso center marking and beam planning tools, as well as the means for contouring at-risk organs and plotting, and respiratory induced motion.

While it may not be surprising that MR provides fertile ground for such a range of visualizations, the matchless wonder of this modality is grounds for at least momentary reflection on what has been achieved. It offers just a sampling of what is yet to come.

Editor’s note: This is the fourth blog in a series of four by industry consultant Greg Freiherr on MR Balances Speed and Clinical Reach. To read MR is About to Get Faster, Cheaper and More Valuable: It's About Time, click here; to read The Unsettling Evolution of Advanced Visualization, click here, and to read “How Increased Productivity Might Pave the Way to Personalized Medicine,” click here.

Revision note: The post-processing for ViosWorks, a partnership with Arterys, will be done on a GPU smart cloud platform, not on the GE Health Cloud, as was initially stated in this blog. As of April 6, the time of this revision, ViosWorks is not commercially available. 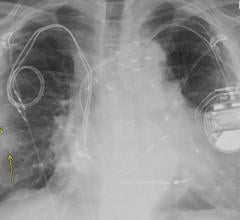 Chest X-ray from a patient included in the study. Posteroanterior view, of a 79-year-old man with history of a previous pacemaker, with abandoned right atrial and right ventricular pacing leads on the right side at time of new cardiac resynchronization therapy defibrillator implant on the left side. Arrows indicate a nodular opacity in the right midlung concerning for mass. Find more images of patients in this study in Radiology: Cardiothoracic Imaging.