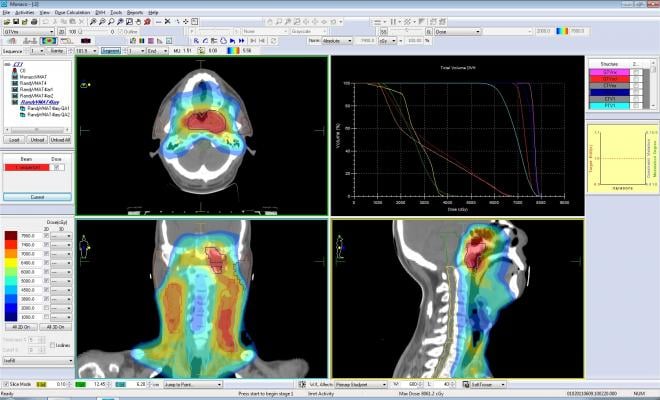 This presentation described five patients undergoing deep inspiration breath-hold (DIBH) breast radiotherapy. Breath hold and free breathing plans doses were initially determined using the Phillips Pinnacle system and re-calculated with Monaco to determine if there were significant differences. Researchers reported equivalent dose reductions for both systems, with observed lung doses that were significantly higher when calculated using the Monte Carlo algorithm in Monaco. The authors state that Monte Carlo calculation can provide insight into dose in the actual dose in lung for both breath hold and free breathing breast cancer patients treated with radiation.

This study examined Monaco recalculation of 29 treatment plans for advanced-stage nasopharyngeal cancers (NPC). Results demonstrated that significant dosimetric differences in NPC treatment plans were observed between a convolution-superposition (CS) algorithm used in the Pinnacle system and the Monte Carlo calculations in Monaco software. Results indicated that PTV54-70Gy doses are higher and consistently predicted by Monte Carlo. The authors conclude that adjustments of the planning dose constraints to incorporate the physics differences from a conventional CS algorithm should be made when optimization is carried out directly with a Monte Carlo dose engine.

In this study, researchers evaluated 20 treatment plans that were generated using the iPlan system and calculated using the pencil beam algorithm. Computed tomography (CT) image sets along with the plan, doses and structures were exported to the Monaco treatment planning software (TPS) and the dose was recalculated using the same voxel resolution (a value on a regular grid in three-dimensional space) and monitor units. Benchmark data was also generated prior to patient calculations to assess accuracy of the two TPS against measurements using a micro-ionization chamber in solid water. Authors observed good agreement for measurements in water and noted that dosing differences varied up to 9.6 percent, concluding that Monte Carlo is a superior dose calculation algorithm.

“Comparison of Pinnacle and Monaco Dose Calculations of SBRT Treatments”

This study exported 14 patients’ files from the Pinnacle TPS to Monaco. All plans were recalculated within Monaco using a Monte-Carlo algorithm and prescription isodose volume to target volume ratio (PITV), R50 (the ratio of the volume irradiated to 50 percent of the prescribed dose to the volume of the planning treatment volume), conformity (a measurement of how well the dose was delivered to the target) and homogeneity indices were computed and used for stereotactic body radiation therapy (SBRT) plan evaluation. The mean PITV for Monaco increased 7 percent over Pinnacle, while the standard deviation increased from 0.047 to 0.076. The Homogeneity Index increased from 1.32 to 1.35. The Target Coverage decreased slightly from 0.98 to 0.97, with standard deviations for Homogeneity Index and Target coverage varying insignificantly by less than 0.2 percent. Researchers concluded that the increase PITV shows that the prescription dose volume increased in the treatment plans calculated by Monaco. The value of Monaco’s Monte Carlo calculation accuracy to stereotactic (small) field dosimetry was demonstrated by the authors. It was shown that dose inaccuracy greater than 5 percent (the level of clinical significance) is possible when non-Monte Carlo calculations are used, implying that Monte Carlo is valuable to patients being treated with small stereotactic fields.

This study was designed to validate the Monaco Monte Carlo beam model by studying effects on three different types of phantoms selected to resemble the densities of lung, soft tissue and bone. Researchers concluded that the accuracy of dose calculation for the small fields in Monaco Monte Carlo algorithm was validated in the three different materials, and found that the results were consistent with measurement data.