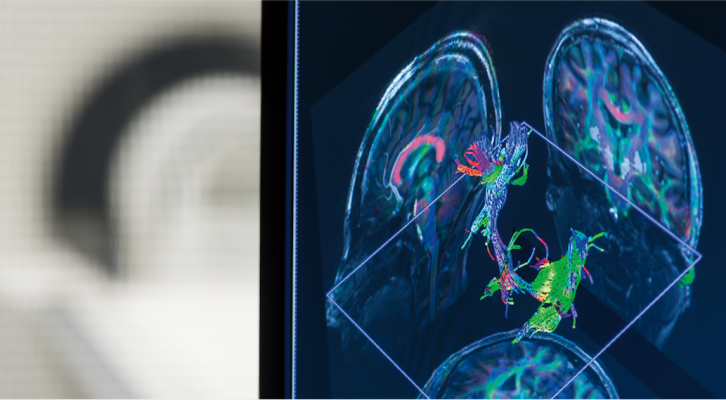 November 13, 2019 — Increased immune system activity along the surface of the brain, or meningeal inflammation, may be important for understanding how multiple sclerosis (MS) progresses from the most common and earliest form of the disease known as relapsing remitting MS (RRMS) to a secondary progressive form. The meninges are a thin, protective tissue that covers the brain and spinal cord. One proposed way to more easily see evidence of inflammation at the meninges is by finding leptomeningeal enhancement (LME) on magnetic resonance imaging (MRI) scans. This can appear early in the course of the disease and increases as the disease progresses, yet the most commonly available MRI technology — 3 Tesla (3T) — gives a limited view of this proposed marker. Investigators from Brigham and Women's Hospital have completed a new study using 7 Tesla (7T) MRI — a far more powerful imaging technology — to further examine LME in MS patients. With this new powerful tool, they have found that this proposed marker of brain inflammation in MS patients is more common than previously reported and is tied to lesions in the gray matter regions of the brain. The team's findings are published in the Multiple Sclerosis Journal.

"The 7T MRI scanner affords us new ways of viewing areas of damage in neurologic diseases such as MS that were not well seen using 3T MRI; it's capturing nuances that we would otherwise miss," said corresponding author Jonathan Zurawski, M.D., a neurologist at the Brigham. "The 7T scanner reveals markers or signatures that were poorly characterized or overlooked and may allow us to better understand the disease process and ultimately better treat MS patients. As a clinician, I often hear from patients that they feel worse, even though the MRI may appear stable. I've always thought that there is probably more to the story of that patient; 7T MRI is helping us fill in those details."

The Brigham's 7T MRI unit arrived at the hospital in 2017 and became the second in the country to be approved for clinical use. Since that time, it has been fully integrated into the MRI program at the Brigham. In addition to providing cutting-edge patient care, Brigham investigators are using the 7T to advance research and discovery.

To conduct their study, Zurawski and colleagues enrolled 30 participants with RRMS and 15 heathy control subjects. All participants underwent detailed 7T MRI scans to look for signs of LME and gray matter lesions.

The team found that two-thirds (20/30) of MS subjects had LME compared to only one of the 15 healthy people (6.7 percent), a tenfold increase. (Previous studies of patients with progressive MS using 3T MRI found signs of LME in only 20 to 50 percent of subjects.) MS patients with LME also had a four-to-five-fold increase in cortical lesions and thalamic lesions, telltale signs of gray matter injury seen in MS. Interestingly, these signs were independent of white matter lesions, which are the traditional marker of MS.

The team chose to study patients with RRMS to help address a gap in the current understanding of the disease. They note that their study was limited by its small sample size. While they cannot yet address how treatment of LME may affect disease progression, and whether their findings may apply to patients with the progressive form of the disease, plans are underway to continue following the patients in this study over time to see how LME and gray matter lesions may change over months and years. The team has also expanded the study's size to include more patients in the future.

"Gray matter injury is an important part of MS, which may be a key factor leading to disease progression," said Zurawski. "Our hope is that by finding new markers of this progression, it opens up the opportunity for developing treatments that can prevent progression before lesions become widespread."