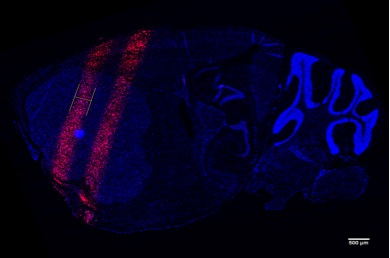 November 18, 2013 — Microbeam radiation therapy (MRT) provides promise for cancer patients through its ability to destroy tumor cells while protecting surrounding healthy tissue. However, research into its clinical use has been limited by the size of the technology required to generate the beams. Until now, administering MRT required massive electron accelerators known as synchrotrons. But c
In a study published online in Applied Physics Letters, a multidisciplinary team led by Otto Zhou, Ph.D, and professor of physics, UNC, X. Sha Chang, Ph.D., associate professor of radiation oncology, UNC and Jianping Lu, Ph.D. and physics professor, UNC built a device using carbon nanotube-based X-ray source array technology developed at UNC that can generate microbeam radiation with similar characteristics as the beams generated by synchrotron radiation. Researchers from Applied Sciences and Radiology at UNC also participated in the study.
Zhou, a member of the UNC Lineberger Comprehensive Cancer Center, points to several studies that have shown that microbeam radiation destroyed tumors and increased survival by as much as a factor of ten in brain tumor bearing animals treated with the technique. While the potential of the technology has been proven, the massive infrastructure needed to undertake the studies has prevented research from being researched for clinical use.
“The innovation here, what we have done at the university, is to build equipment that is compact and can be potentially used in a hospital and achieve similar therapeutic value,” said Zhou. “The fact that the microbeam can deliver the radiation effect is known, the experiments have been done, but the use of the synchrotron-based equipment is not practical.”
MRT doses the tumor area with thin parallel planes of radiation up to a few hundred microns in width, creating a striped pattern of irradiation across the tumor. In tests with lab animals, this approach leads to lower toxicity and the ability to safely deliver a much higher dose to treat radioresistant tumors such as brain tumors.
The team has already shown that their compact MRT device can generate similar doses and distribution of radiation in lab animals as seen in the synchrotron-based studies, capable of accurately delivering the microbeam radiation to the brain tumor site in mice. With that knowledge, they have begun work on determining whether animals treated with their device show the same therapeutic benefits as those in the synchrotron studies. That would allow researchers at UNC and elsewhere to begin the level of research into MRT necessary to prove that it can benefit human patients.
“Just imagine what could be the potential clinical impact,” said Chang, who is also a member of UNC Lineberger. “In many children’s brain tumor cancer cases, normally prognosis is not good. Radiation toxicity for developing tissue is much more severe than for adults. This radiation can control the tumor, but it does not damage normal tissue. It has a great potential for clinical application.”
Because of the limited ability of researchers to study the effects of MRT, little is known about why the radiation destroys tumors but only causes minimal damage to surrounding tissues. A more compact MRT emitter would allow more researchers access to the technology and spur a greater level of research into the interplay between the radiation and biology, according to Lu.
This project is supported by grants from the National Cancer Institute (NCI) Grand Opportunity program (RC2), the NCI-funded Center for Cancer Nanotechnology Excellence at UNC and a pilot grant from the National Institutes of Health (NIH)-funded North Carolina Translational and Clinical Sciences Institute. The technology is being developed in conjunction with XinRay Systems, a startup founded through and partially owned by UNC. The UNC team has recently received a U.S. patent covering the compact MRT technology.
For more information: www.nccancerhospital.org, apl.aip.org