Transforming the Outlook on Cancer 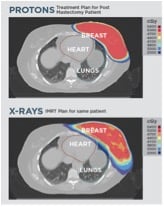 Proton therapy doesn’t get as near to the heart and other internal organs as X-ray therapy does. (Image courtesy of Provision Cares Proton Therapy Center.)

Thirty-three. Twenty-nine. Sixty-four. These are the ages of the breast cancer patients who have walked through the Provision Cares Proton Therapy Center in Knoxville, Tenn. With decades of life ahead of them, they face a cure that could be worse than their disease.

A growing body of research shows a significant uptick in risk of post-treatment cardiac disease in women who have received conventional radiation for cancer. According to a seminal article in the New England Journal of Medicine, March 2013, women’s risk of a “major coronary event” increases by 7.4 percent for every gray (Gy) of radiation exposure to the heart. There exists no safe level of radiation, the study concluded.

For women diagnosed with cancer in the left breast, radiation treatment results in a mean dose of 10 Gy to the heart. Cardiac issues can develop within five years of treatment and continue for the rest of a woman’s life.

Another study published in JAMA Internal Medicine further quantifies the risk. Women with breast cancer who receive conventional radiation therapy stand a 0.5 percent to 3.5 percent higher chance of succumbing to a heart attack or other heart conditions. This study also explicitly stated that a higher risk exists for women with a tumor on the left side.

There is an alternative, however.

Lungs Take a Hit, Too

The breasts sit adjacent to two of the body’s most vital organs. Conventional radiation affects the lungs as well. Research shows radiation-induced pneumonitis can result from even low doses of radiation to the lungs. Recent studies suggest a critical threshold could be just 5 Gy.

Several studies reveal the following regarding the risk of cancer with conventional radiation versus proton therapy:

•    The risk of secondary cancer with proton therapy is 5-6 percent whereas 3-D conformal-ray therapy yields a 10 percent secondary risk of cancer. Proton therapy essentially cuts the risk of future malignancy in half.

•    A number of studies expect the secondary cancer risk to be even higher with IMRT, even as much as 15 percent, or three times that of proton therapy. Here is how it breaks down.

What is Proton Therapy?

Radiation therapy is the recommended and uniquely effective therapy for a majority of cancer indications. Generally, 60 percent of all cancer patients receive radiation therapy at some point during their treatment course. But the photons that destroy cancer cells cause collateral damage to healthy tissue as well. As a result, patients experience side effects such as skin burns, fatigue and the disruption of a variety of bodily processes depending on the location of the cancer. And, even more concerning, radiation therapy results in higher risk of long-term secondary chronic issues including heart and lung disease, and cancer.

Proton therapy on the other hand presents a more advanced solution to the need for radiation therapy to attack cancer growth. Proton therapy allows curative doses of radiation to be delivered to the tumor site, but reduces damage to surrounding organs and tissues.

Over the past 25 years, technology advancements and clinical trials have shown proton therapy to be an effective treatment for the majority of solid tumor cancers including prostate, breast, head and neck, brain and pediatric cancers. The U.S. Food and Drug Administration (FDA) approved proton therapy in 1988.

A piece of equipment called the ion source extracts protons from hydrogen gas. It then injects the protons into a cyclotron, which accelerates them to two-thirds the speed of light. The cyclotron ejects the protons into an energy selection system and degrader. The degrader adjusts the energy level and optimizes it for delivery to the patient. A fixed-beam or gantry system revolves around the patient, delivering the protons directly to the cancer site.

More than 100,000 patients have chosen proton therapy for their cancer treatment.

An energetic woman, Kimberly Kraus, held a fast-paced job managing a restaurant. When she was diagnosed with breast cancer last year, the Provision Center for Proton Therapy helped keep her on her feet through treatment.

A grandmother and two aunts had already suffered from breast cancer, so Krause started annual mammograms early. At age 39, her mammogram showed a possibility of breast cancer. After going in for a biopsy, her doctor called her with the news — she had early stage breast cancer. He recommended six weeks of radiation in addition to lumpectomy or mastectomy.

“We all meet in order to provide input into a patient’s case so they can get the best possible recommendations,” said Webber. Included on that task force is Meek.

Because of the placement of Krause’s tumor, the group determined traditional radiation could affect her lungs, giving her a higher chance of developing cancer later in life.

“This is not an immediate effect,” said Meek. “What can happen is potential long-term radiation damage to the left side of the chest. This includes a higher incidence of heart disease and a higher incidence of lung cancer. Proton therapy is certainly advantageous for younger women. Many chemotherapy drugs can potentially affect the heart, also.

“The benefit in my view is that we get the same benefit for the breast, and we reduce by a considerable margin the damage to the heart and lung,” he added.

Krause found herself surprised at how proton therapy enabled her to keep up with her busy life. “It was amazing. I had minimal side effects and was able to keep the same work schedule,” she said.

Larisa Brass is a career journalist, freelance writer and 2014 graduate of Loma Linda University with a master’s in public health. She is currently employed by Provision Healthcare in Knoxville, Tenn.