State of the Industry: Radiation Therapy 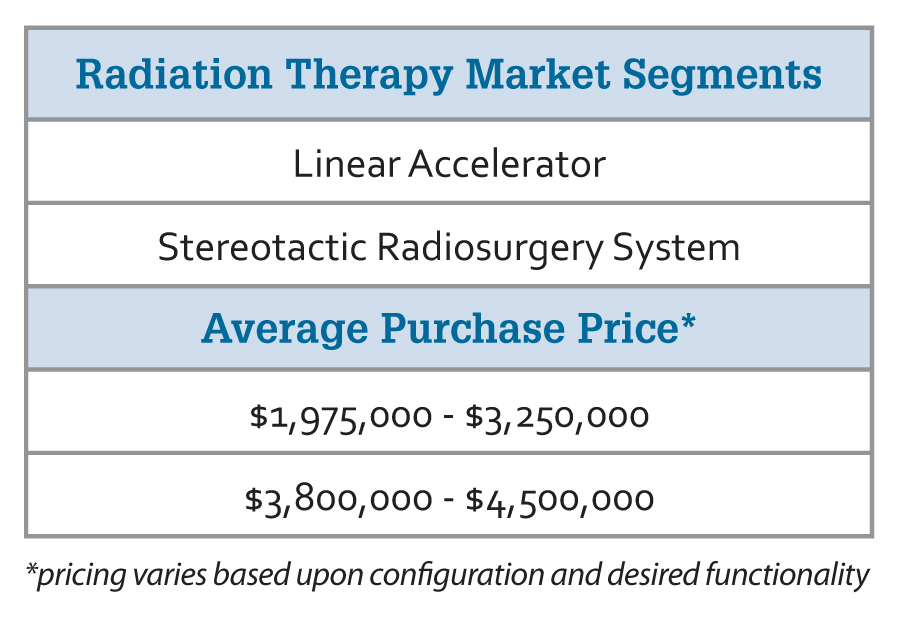 The radiation therapy market, hit hard in 2009 by the recession, saw a sharp decline in purchasing from which it has slowly recovered. During the last five years the market has been steadily growing, with capital equipment budgets for radiation oncology sites increasing. However, it has only been within the last year that equipment purchases for radiation therapy have leveled out. Purchasing decisions today are driven by two main factors: advancements in technology, including more targeted treatment, multifunctional capabilities and improved patient safety; and the evolving reimbursement model, which weighs patient outcomes and the quality of care delivered more heavily.

Technology Advancements and Evolution of the Market

The radiation therapy market is segmented by two main technologies — linear accelerators and stereotactic radiosurgery systems (SRS). Historically, conventional radiation therapy and SRS were two completely different technologies requiring separate treatment systems. However, as vendors have expanded system capabilities over the past few years, with the help of stereotactic add-ons most conventional linear accelerators can provide at least some form of stereotactic treatment.

These additions to linear accelerator packages are part of a distinct shift toward more multi-functional radiation treatment systems. With tighter budgets, hospitals are more aware that it is a loss of revenue to have a machine sitting unused for a portion of the day. For this reason, the majority of treatment centers are looking for hybrid systems that are capable of both conventional and stereotactic treatment methods to ensure full utilization throughout the day. Facilities without a large referral base for SRS cases can also benefit from the economical hybrid systems as they allow providers to offer services that would otherwise not be financially feasible.

Market activity for dedicated stereotactic radiosurgery systems has been stable over the past few years, but remains low in comparison to linear accelerators. This discrepancy is mostly attributed to the high cost associated with the system, specialization required and hybrid system options. Although, innovative technology is driving the increased use of SRS. For example, newer radiosurgery and integrated treatment delivery units allow for radiosurgery treatment throughout the body with greater precision and ability to spare healthy tissue. Specialized treatment planning software, miniature multi-leaf collimators and the kV imagers for localization are primary components that have helped increase the accuracy and precision of dose delivery. Also, intensity modulated and image guidance tools have allowed this technology to move into the forefront as a more outcome-driven solution for radiation oncology treatments.

Regardless of the system type, technology remains a key factor in the purchasing decision. More facilities are veering away from long-term customer loyalty in lieu of the best technology for the right price. Currently, Varian’s TrueBeam and Elekta’s Versa HD are the most popular treatment delivery systems among many hospitals, although Accuray and Brainlab also offer radiation therapy solutions.

Legislative Issues and the Focus on Quality and Value

Changes to legislation and reimbursement in the medical field over the last five years have been incentivizing providers to improve patient outcomes and increase the quality of care delivered while also controlling costs. A good example of this is how positron emission tomography/computed tomography (PET/CT) is now reimbursable for more than just the initial staging. Hospital reimbursement will also be effected by a patient’s experience since satisfaction scores, along with outcomes, are being reported to the Centers for Medicare and Medicare Services (CMS). However, quality is not only on the government’s mind, but is also something more patients have started paying attention to. This is especially true in light of the large amount of information available through ratings databases such as Quality Care Finder on Medicare.gov, the Agency for Healthcare Research and Quality (AHRQ) and Consumer Reports.

While a recent Gallup poll showed that most Americans (82 percent) are satisfied with their quality of care, the information age is changing how patients seek care. They are often better informed about their options and have a greater understanding of the quality of care a provider can offer than ever before. Additionally, when it comes to oncology, word-of-mouth about experience is particularly critical. As this trend continues and patients become more willing to choose their providers, hospitals will face the added challenge of competing for patients. For this reason many providers are now marketing directly to the patient with technologies that offer the promise of improved outcomes, early detection or less invasive procedures, which are attractive to patients.

CMS has also started to incorporate package pricing reimbursement strategies for services such as planning, simulation, medical physics consultation and treatment when performed in the same day as opposed to separate payments. Package pricing is also starting to emerge with radiation therapy simulation that has been revised to include dosimetry. CMS has also combined codes for non-robotic linac and robotic-based linac treatments. Additionally, they now reimburse stereotactic body radiation therapy and robotic technology at a similar rate as stereotactic radiosurgery.

Something else of note for freestanding clinics is that MedPac has proposed leveling the payment level for hospital, ambulatory centers and physician offices.

Effect of Stage 2 and 3 Meaningful Use in Radiation Therapy

Driven by the HITECH Act (S.350), Stage 2 Meaningful Use has taken effect this year and will require, among other things, more than 30 percent of radiology orders created by the provider to be recorded on the electronic health record (EHR). Considering the practice of treating cancer can require multiple settings such as a doctor’s office, surgery and therapy centers, the networking of EHR is a large priority. Additionally, under Stage 2, providers in ambulatory settings will be required to identify and report cancer cases to state registries. This will also include reporting on outcomes. In 2015 fiscal year reimbursement penalties of 3 percent will take effect for providers not meeting their Stage 2 requirements. These factors should incentivize providers to invest in their IT infrastructure if they have not already.

Recent Stage 3 requirements have been pushed back to 2017 and although the specifics have not been finalized, they will focus on improving and tracking outcomes. One challenge for radiation therapy in particular will be the addition of more ICD-10 codes. Overall, providers will face the task of maintaining a system of 68,000 codes (up from the current 4,000). This increase means hardware and software will be an issue, but another primary concern will be the required long-term planning and training. Missteps in coding could result in loss of revenue, higher costs and missed deadlines.

MRI-guided Radiation Therapy. The ability to have image guidance without creating additional radiation dose is a huge development in the world of radiation oncology. In May 2012, this dream became a reality as ViewRay received FDA 510(k) clearance for their MRI-guided treatment delivery system. Other vendors are exploring this new technology. Currently Elekta is working with Philips to develop their own MRI-guided therapy solution, while Varian is working with IMRIS.

• Reduction in side effects

Due to these advantages, proton therapy is especially beneficial in treating cancers in close proximity to critical organs such as the brain, head, neck and lungs, as well as pediatric cancers. As research studies are conducted to prove the benefits of proton therapy vs. photon radiation therapy treatments, we anticipate interest in proton therapy will increase in the near future.

It is also interesting to note the reimbursement changes that proton therapy has undergone. As the technology has evolved and capital costs have decreased significantly, CMS has also lowered the payment for basic proton beam radiation therapy. On the other hand, CMS has reassigned current procedural terminology (CPT) codes 77520 and 77522 to APC 0667 (Level II proton beam radiation therapy), which generates a higher payment level, increasing reimbursement by 43 percent.

The Future of the Industry

The radiosurgery market should continue to grow due to the increased precision in localization of the target area and the ability to escalate the dose while sparing healthy tissue. Radiosurgery applications include benign or malignant tumors anywhere in the body, anatomic regions that have received previous radiotherapy, boost treatment sites, arteriovenous malformations, pituitary adenomas, acoustic neuromas and treatment areas located near critical structures.

We are now seeing intensity-modulated radiation therapy (IMRT) become the gold standard for treating certain tumor volumes while image-guided radiation therapy (IGRT) is on its way to becoming part of the standard protocol seen in many radiation oncology centers. IGRT allows for more accurate localization of the treatment area and provides data to make any necessary adjustments in positioning. With the availability of these features, the exact location of the prescribed treatment area and each subsequent treatment can be monitored more closely.

Respiratory gating and dynamic adaptive techniques are seeing some growth. Medical experts believe that with future developments in technology, cancer will progress toward a chronic disease and radiation treatments will become more customized for each patient. Technologies such as volumetric modulated arc therapy (VMAT) and RapidArc can deliver treatments in significantly less time (as fast as two minutes) than gating technologies. Since patients spend less time on the treatment table, this technology may reduce the need to gate the treatment beam.

Looking forward, system upgrades and the replacement of existing equipment will continue to drive market growth for linear accelerators and stereotactic radiosurgery systems as the technology is constantly improving.

Rachael Bennett joined MD Buyline in 2008 with seven years of clinical experience in the medical field. She is the primary clinical analyst for linear accelerators, stereotactic radiosurgery, mammography systems, biopsy systems and other radiation oncology and women’s health capital equipment codes. She currently holds registries as both a radiographer and radiation therapist through the American Registry of Radiologic Technologists (ARRT).

James Laskaris is a senior emerging technology analyst at MD Buyline and has been with the company since 1994. With more than 30 years of experience in the healthcare field, he is the primary analyst of high-end OR technology, and also covers issues related to the legislative and reimbursement impact on healthcare.

Katie Regan joined MD Buyline in 2013, bringing with her seven years of clinical and laboratory research experience. She previously worked as a senior research associate for DAVA Oncology, a consulting group focused on the facilitation of successful oncology drug development. At MD Buyline, she is responsible for all clinical, financial and general healthcare publishing projects.