One method for using SBRT for prostate cancer. 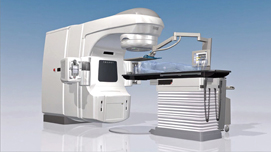 Stereotactic body radiation therapy (SBRT) is an investigational radiotherapy modality for the treatment of localized prostate cancer. Conventional radiotherapy options include prolonged schedules of daily treatment using relatively low radiation doses over a period of six to nine weeks. SBRT offers promise of an expedient, well-tolerated and effective schedule of only five treatments of larger doses for selected patients for whom current conventional treatment options would be either medically contraindicated or refused by the patient for reasons of inconvenience.

As an extremely hypofractionated therapy, SBRT furthermore provides a test of the radiobiologic principles that support fewer and larger fractions for prostate cancer irradiation. Accumulating radiobiological analyses of clinical outcomes suggest that the ?:? ratio of prostate cancer may be exceptionally low, with some studies reporting calculated ratios as low as 1.5. 1–8  If true, then prostate tumor effect may be highly sensitive to fraction size and perhaps even more so than the late effects on surrounding normal tissue. Therefore, the clinical implication of a hypofractionated treatment schedule for prostate cancer may be improved tumor control rates, while maintaining a similar biologically effective dose (BED) for normal tissue late effects, when compared to a conventionally fractionated regimen.

A fundamental technical demand of any prostate SBRT delivery system is its ability to respond to organ motion. Prostate movement is stochastic, meaning the gland may move in any direction at any time unpredictably. 9–10

In high dose rate (HDR) brachytherapy hypofractionation, organ motion is accounted for by placement of afterloading catheters into the prostate, and the catheters then move with the gland. For external modalities, implanted fiducial markers are commonly used to correct for interfractional organ motion prior to treatment delivery through the use of onboard imaging tools available on modern accelerators.

However, this may be inadequate for hypofractionated therapy, as intrafractional prostate motion may also occur with displacements of up to 1 cm. 11–16  When a small number of large fractions are administered, there is an increased need to account for this source of localization error in order to maintain the minimal planning target volume (PTV) margins necessary for SBRT. Consequently, this reduces normal tissue complication probability and increases tumor control probability. 17–18  An optimal solution for external modalities is, therefore, a system that couples real-time tracking of the prostate to a linear accelerator and permits corrective action to changes in prostate position within a treatment fraction.

Real-Time Tumor Tracking
Varian Trilogy is a rapid output linear accelerator equipped with: (1) a multileaf collimator capable of producing complex and precise dose distributions; and (2) an integrated image guidance system. Briefly, the system provides image guidance by robotically extending an opposed kV X-ray source and amorphous silicon flat panel imager tandem over the target volume. The source-imager tandem may then acquire planar or volumetric imaging of implanted fiducial markers and/or the target to permit corrections of target setup error prior to treatment.

During treatment – and particularly for larger fractions that require longer treatment times – imaging may need to be repeated to identify and correct intrafractional target motion. While technically possible, repeat imaging during a treatment fraction is time-consuming and is still unlikely to identify every instance of target excursion outside the treatment volume.

The Calypso 4-D localization system is a real-time target tracking system that provides a more efficient solution to the problem of intrafractional target motion. This system consists of an electromagnetic array that can detect the positions of signal-emitting transponders implanted in the target and provides continuous information on target position with submillimeter accuracy.

The system creates an electromagnetic field within the patient, which induces the implanted transponders to oscillate at a specific frequency. When the field is turned off, the transponders emit a signal that is received by the system to determine precisely their positions within the prostate. This function is performed 10 times per second to provide real-time target tracking. There is no use of X-rays; so no added radiation exposure for the patient.

Varian Trilogy, when coupled with the Calypso system, permits highly precise radiation dose shaping with real-time target tracking to account for intrafractional prostate motion during SBRT. As such, this combined system allows for the identification of potentially adverse movement of the prostate during treatment delivery and subsequent correction — either by stopping the treatment beam and waiting for the prostate to return to its normal treatment position or by repositioning the patient — in order to maximize the therapeutic effect of the treatment and mitigate its associated risks of rectal and bladder complications.

Our Method
Our method of prostate SBRT with the Varian-Calypso system is as follows: The patient is set up on the treatment table with initial target localization accomplished through Calypso electromagnetic guidance. Varian’s onboard imager then generates a volumetric 3-D image of the prostate as verification of target geometry prior to delivery of a large fraction dose.

We emphasize this step as critical to the overall treatment process. We have observed among our study patients with some frequency a perfect match of fiducial markers to their reference coordinates, but deformation of the prostate on the same cone beam computed tomography (CT). When observed, this event usually occurs for a prostate that has a particularly concave interface with the rectum. With increased rectal filling, this concavity is exaggerated yet further, pushing the posterolateral prostate outside the field and bringing the midline anterior rectum further into the field. Consequently, the high-dose region misses a portion of the target and increasingly encroaches upon normal rectal tissue.

In this circumstance, we have had the patient evacuate his rectum and then return to the treatment table for re-imaging. Once the set-up conditions are satisfied, the treatment can begin. The Calypso system is active at all times during beam delivery, and any identified transponder excursion beyond the 2 mm threshold we have assigned for corrective action stops the beam. As described earlier, either the beam is started again once the prostate is observed to have returned to its treatment position or the patient is repositioned and the entire set-up process is repeated. The treatment delivery then resumes and is completed.

To date, we have enrolled and treated more than 80 patients on study using this methodology since 2007. Our protocol calls for the delivery of 5 fractions of 8 Gy on an every-other-day schedule for a total dose of 40 Gy. Patients eligible for study are diagnosed with localized prostate cancer of low or intermediate grade and have a prostate gland measuring less than 60 cc on ultrasound volume assessment.

We have not observed any serious toxicities requiring surgical correction or other procedures, and we have not observed any cancer recurrences. While highly encouraged by these favorable early results, we recognize that longer followup with a larger number of study patients is needed to provide further validation of these promising outcomes and support for prostate SBRT as an alternative to other radiation modalities in the management of low-risk prostate cancer.

Constantine Mantz, M.D., a board-certified radiation oncologist trained at University of Chicago, is chief medical officer at 21st Century Oncology. He has published scientific articles and presented original research at many international meetings on prostate cancer, breast cancer, head and neck cancer and lung cancer. He has participated in legislative and related efforts about payment methodologies and coverage decisions pertaining to radiation therapy services.