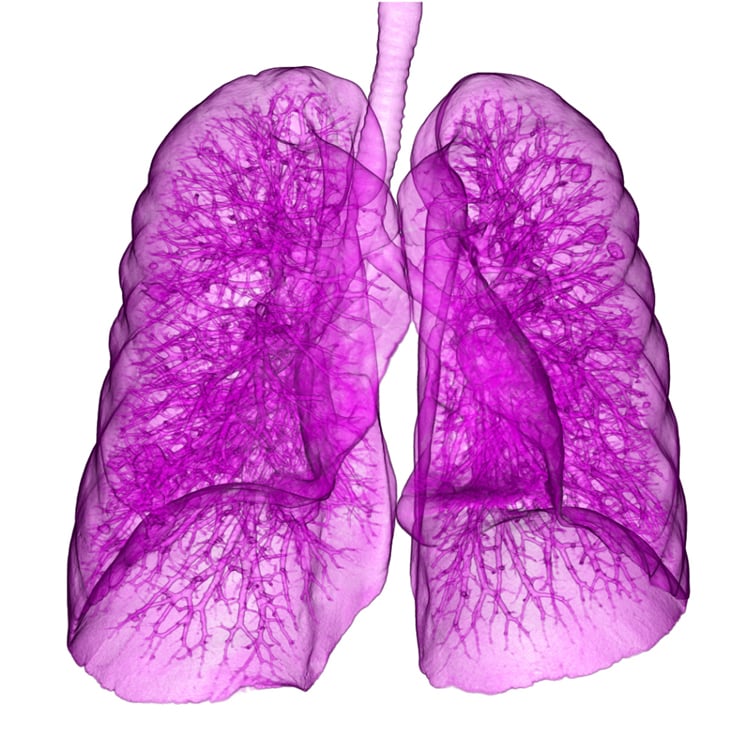 April 28, 2015 — Radiotherapy using protons can deliver more accurate treatment to a tumor while reducing the dose to surrounding tissue. However, in mobile organs such as the lung, precise targeting of the dose is difficult. Now researchers have succeeded in making a model of breathing movement that allows for the precise measurement of narrow beams to a dummy tumor by simulating the motion and physical properties of the chest anatomy in a model, which was presented at the 3rd European Society for Radiotherapy and Oncology (ESTRO) Forum in Barcelona, Spain.

Rosalind Perrin, M.D., from the Centre for Proton Therapy at the Paul Scherrer Institute, Villigen, Switzerland, described to the conference the method she and colleagues have developed to test the application of proton therapy to lung cancer — using a delivery technique called rescanning, which helps to mitigate the effect of motion — and to develop practical ways to implement it in the clinic for patient treatments.

"This involved experiments using an advanced breathing model of the patient, a so-called 'anthropomorphic phantom', with integrated measurement devices to accurately measure the dose distribution. We found that our rescanning technique worked well to overcome the effect of motion on the dose delivered to the tumor, and for tumor motions of up to 1 cm," she said.

The model developed by the researchers was made up of a sphere representing a tumor moving within an inflating lung, enclosed in a rib cage complete with surrounding muscle and skin layers. The model can be programmed to move with breathing patterns specific to each patient. Radiation dosage was measured during movement, and the researchers found that the rescanning technique allowed the application of clinically acceptable dose distribution to the tumor, and only a minimal dose to surrounding tissues.

Scanning proton therapy is an emerging technology in cancer therapy, in which a narrow particle beam, consisting of accelerated hydrogen nuclei, is scanned through the tumor and administers highly targeted radiation to the cancer cells. Because protons have a relatively large mass, the beam delivers most of its radiation dose towards the end of its path in tissue, and thus proton therapy can be designed to limit dose to surrounding tissues. Furthermore, a proton beam only penetrates the tissue up to a given depth, determined by its energy. So, compared with conventional radiotherapy techniques, the therapy allows a maximal dose to the tumor, while reducing the dose elsewhere.

However, for mobile tumors in the liver or lung, organ and tumor motion deteriorates the dose distribution because there may be a rift between the radiation delivery timeline and the timeline of the tumor motion: the "interplay" effect. The researchers at the Paul Scherrer Institute have worked to overcome this problem by developing a new, state-of-the-art delivery system, and the technology required by these advanced "motion mitigation" methods is now operational. The rescanning technique involves scanning the tumor several times with the proton beam.

"This makes it possible to average out the dose to the moving tumor, and also reduce the effect of motion on the dose delivered to it. Because of the sensitivity of the lung to radiation, as well as the proximity of the heart, esophagus and spinal cord, it is particularly important to keep the radiation dose to surrounding tissues as low as possible in lung cancer," said Perrin.

The next challenge for the researchers is to translate the technique into the clinic for the benefit of patients, with the aim of improving cancer radiotherapy while reducing side effects. However, cost remains a problem. "The cost-benefit of proton therapy is a hotly-debated topic amongst national healthcare bodies and insurers. But if we can show, through randomized clinical studies, that proton therapy is better for certain cancer types, this may influence politicians and insurance providers to make appropriate decisions. This is particularly important for cancer types with a poor outcome that are subject to motion, especially advanced-stage liver and lung cancers," Perrin concluded.

Prof. Philip Poortmans, president of ESTRO, commented: "Proton therapy is currently attracting a lot of attention in the field of oncology as well as in the lay press. This study points out very accurately that a lot of work still has to be done before its applicability to most tumor sites will be broadly acceptable outside the field of clinical trials. The investigators focused on the challenge of the movement of the tumor within the patient's body, for example with a normal breathing cycle. The rescanning technique they describe, which compensates for tumor motion, averages out the delivered dose while keeping the dose to surrounding normal tissues at a low level. The next challenge will be to bring this novel technique to the point of clinical applicability."