During the past five years, intensity modulated arc therapy has seen a surge in activity, with significant improvements in planning and delivery tools 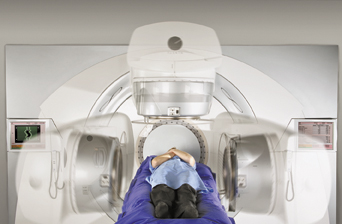 VMAT reduces treatment times compared to IMRT, since gantry rotation, MLC movement and radiation delivery happen simultaneously, as with the Elekta VMAT above.

In arc therapy, a linear accelerator gantry moves in a continuous arc around the target while delivering radiation dose. Patients have been routinely treated with this technology since the 1980s, when it was put into use for stereotactic radiosurgery (SRS) of the brain. The advantage was that the low-dose region was spread out over a larger amount of healthy brain, reducing treatment toxicity.

At the same time that arc treatments were becoming routine in certain applications, intensity modulated radiation therapy (IMRT) was being developed. IMRT entered wide clinical use in the late 1990s. In this technique, the beam intensity of each beam is modulated in such a way that the target volume receives a relatively uniform dose, but nearby normal structures can be spared to a greater extent than is possible without modulation. This enables a reduction in the radiation dose received by nearby critical normal structures.

In 1995, Cedric Yu, then at William Beaumont Hospital, described the merging of arc therapy and IMRT into what he called intensity modulated arc therapy.1 The goal was to harness the strengths of both techniques to further increase the ratio between target dose and dose to important nearby tissues.

The concept of intensity modulated arc therapy lay fairly dormant until the last five years, which have seen a burst of activity from researchers and vendors, culminating in sophisticated, robust planning and delivery tools. Newer linear accelerators are able to dynamically vary the multileaf collimator (MLC) position and rotation, dose rate and gantry rotation rate through an arc. And with the explosion in computing power, clinically practical algorithms for rotational plan optimization have become available.

The general approach has come to be known as volumetric modulated arc therapy (VMAT). The biggest appeal of VMAT is the reduction in treatment times compared to traditional IMRT, since there is no wasted time, as gantry rotation, MLC movement and radiation delivery all happen simultaneously. (See Figure 1, which shows an axial view of a VMAT plan for prostate cancer treatment.)

Several vendors have introduced full-featured, flexible VMAT solutions. These include Varian’s RapidArc, Elekta’s VMAT, Philips’ SmartArc and Nucletron’s Oncentra VMAT (the latter two are software products that can be used with Varian or Elekta linear accelerators). The Accuray TomoTherapy system uses an intensity modulated fan beam rotating helically around the patient and has more degrees of freedom than linac-based VMAT techniques.

Planning is a Complex Procedure
Planning a VMAT treatment places high demands on the optimization software. Because radiation is delivered from a continuous array of directions, the treatment is usually approximated in the software by a non-rotational treatment delivered from many closely spaced beams. The method implemented in the Varian RapidArc software, developed by Karl Otto, illustrates this point well.2 A draft treatment plan is created using only a few beam directions, then new beam directions are inserted halfway in between the existing beams. The starting point for the new aperture shapes is the average of the neighboring beams’ apertures, which helps to ensure that the final plan will be deliverable in a single arc (i.e., not asking the MLC leaves to move faster than physically possible).

This is an important limitation on linac-based VMAT, since the modulation at any one angle is dependent on the modulation from adjacent angles. Once the new beams have been added, the whole plan is re-optimized. The process of adding beams and re-optimizing is repeated until there are many finely-spaced beams that will be well approximated by a rotational delivery. The need to consider MLC leaf speed, machine output and linac gantry speed makes this a very complex optimization problem.

An important question is whether VMAT is able to produce good-quality treatment plans in situations with intricately shaped targets and normal structures. This issue has prompted some spirited exchanges in the scientific literature. (For an example, see the article and accompanying letters to the editor in reference 3, below). A number of groups have published comparisons with standard IMRT that indicate VMAT is able to produce good plans even for more complex disease sites, like the head and neck.

An interesting new study from the University of Jena in Germany compared sophisticated head and neck plans from two VMAT systems, TomoTherapy and several IMRT technologies.4 Several findings were surprising.

The VMAT systems did not produce universally reduced treatment times compared to IMRT. An IMRT technique called direct aperture optimization had the lowest number of monitor units, which helps prevent radiation scatter into normal tissues. The two VMAT implementations were able to provide good target coverage, but only one could meet the goal for the median parotid gland dose. In general, treatment planning comparisons have reported faster treatment times with fewer monitor units for VMAT relative to IMRT. With respect to target coverage and normal tissue sparing, no general conclusions can be drawn.5

Another issue is the new challenges that VMAT poses for quality assurance. Tools such as field fluence measurements cannot be easily used for VMAT, since there are no discrete field directions. Many commercial VMAT quality assurance products have emerged, and when the right tools are used, VMAT treatments are considered to be as safe and reliable as IMRT.

Finally, physicians must be aware that rotational therapy tends to distribute a bath of low radiation dose to a large volume of normal tissue around the target. This is likely not clinically significant for adult patients, but must be considered in pediatric cases because of the increased possibility of secondary malignancies in this population.

In the next 10 to 15 years, we can expect to see VMAT integrated with systems for tumor tracking, with on-the-fly plan optimization and adaptive gantry/MLC motion. Sophisticated planning tools like multicriteria optimization are a natural fit for VMAT.6 These tools will likely see widespread clinical adoption and will make it easy to balance plan quality and delivery time for each patient’s unique situation. In that scenario, VMAT techniques may find their niche for treating tumors when reduced treatment time is an important consideration.