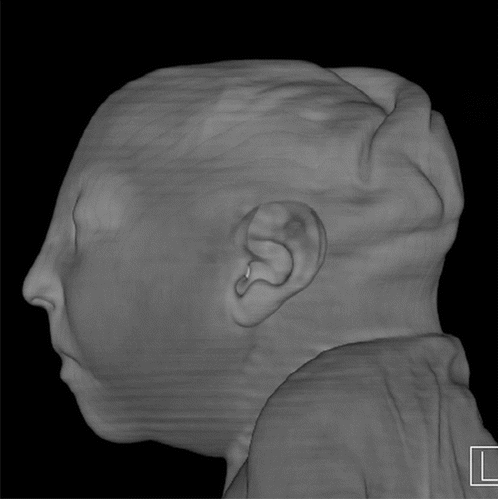 A prenatal computed tomography (CT) 3-D reconstruction of fetus with Zika virus. To access all Zika radiology images related to the RSNA article go to http://pubs.rsna.org/doi/full/10.1148/radiol.2016161584

August 26 – The Radiological Society of North American (RSNA) journal Radiology has published a special report, detailing the spectrum of imaging findings in babies and fetuses infected with the Zika virus. The article includes a large number of ultrasound, magnetic resonance imaging (MRI) and computed tomography (CT) images of Zika virus patients during pre- and postnatal development, showing the profound effects of the disease.

“Imaging is essential for identifying the presence and the severity of the structural changes induced by the infection, especially in the central nervous system,” said the report’s lead author, Fernanda Tovar-Moll, M.D., Ph.D., vice president of the D’Or Institute for Research and Education and professor at the Federal University of Rio de Janeiro, in Rio de Janeiro, Brazil. “Microcephaly is just one of several radiological features.”

Watch the VIDEO “Radiologic Assessment of Zika Virus.” This is an interview with study authors Tovar-Moll and Patricia Oliveira-Szejnfeld, M.D.

Zika appears to be most dangerous when transmitted from a pregnant mother to her fetus during the first trimester of pregnancy, increasing the likelihood of severe brain defects in the baby, including microcephaly. In cases of microcephaly, the baby’s head is exceptionally small, due to an underdeveloped brain. Zika has also been linked to eye defects, hearing impairment and stunted growth in babies.

“The first trimester is the time where infection seems to be riskiest for the pregnancy,” said study coauthor Deborah Levine, M.D., director of obstetric and gynecologic ultrasound at Beth Israel Deaconess Medical Center and professor of radiology at Harvard Medical School in Boston. “From an imaging standpoint, the abnormalities in the brain are very severe when compared to other congenital infections.”

Though much of the concern in the media regarding the toxic effects of Zika virus has focused on brain findings of microcephaly, the researchers noted that there are a variety of brain abnormalities that can be found in fetuses exposed to the virus, including gray and white matter volume loss, brainstem abnormalities, calcifications and a condition called ventriculomegaly, where the ventricles, or fluid filled spaces in the brain, are enlarged. Some babies infected by Zika may not have a small head size if the ventricles remain excessively enlarged.

The researchers performed a retrospective review of imaging and autopsy findings associated with congenital Zika virus infection found in the Instituto de Pesquisa in Campina Grande state Paraiba (IPESQ) in northeastern Brazil, where the infection has been severe.

From June 2015 to May 2016, 438 patients were referred to the IPESQ due to rash during pregnancy or suspected central nervous system abnormality. From this group, the researchers identified 17 fetuses or neonates of  women who had imaging at IPESQ, as well as documented Zika infection in fluid or tissue (“confirmed cohort”), and 28 fetuses or neonates with brain findings suspicious for Zika infection with intracranial calcifications (“presumed cohort”). Imaging exams included fetal MRI, postnatal brain CT, postnatal brain MRI and, in some cases, longitudinal prenatal ultrasound.

Ninety-four percent of the confirmed Zika group and 79 percent of the presumed Zika group had abnormalities of the corpus callosum, which is a large nerve fiber bundle that allows communication between the left and right hemispheres of the brain. All but one had cortical migrational abnormalities, meaning the neurons did not travel to their proper destination in the brain.

Intracranial calcifications were present in almost all of the neonates, most commonly found at the gray-white junction of the brain. All of the babies exhibited reduced tissue volume in their brains. All patients showed varying abnormalities in cortical development.

“The severity of the cortical malformation and associated tissue changes, and the localization of the calcifications at the grey-white matter junction were the most surprising findings in our research,” Tovar-Moll said.

The babies’ skulls frequently had a collapsed appearance with overlapping sutures and redundant skin folds. The researchers believe the unusual appearance of the skull is due to a combination of the small brain as it develops, but also a result of what at some point was likely a larger head size — due to ventriculomegaly — that then decompresses, and/or brain atrophy, giving the skull the collapsed shape.

Levine noted that ultrasound in pregnancy can show the abnormalities associated with congenital Zika infection, but it may take time before these changes are obvious.

“More than one ultrasound or MRI scan in pregnancy may be needed to assess the growth and development abnormalities of the brain,” she said.

Zika is mainly spread to humans via the bite of an infected mosquito. Symptoms may include fever, rash, joint or muscle pain, headache and bloodshot eyes. However, many people infected with Zika have no symptoms at all. Although the current Zika outbreak is centered in Brazil, it has spread to countries and territories around the world, including the United States.

Pregnant women and women who are considering becoming pregnant should avoid visiting areas where infected mosquitos are known to be present. However, if women live in areas where the mosquitos are present, the recommendation of the Centers for Disease Control and Prevention (CDC) is to wear clothes that protect from mosquito bites, use mosquito repellent and get appropriate testing, including routine prenatal care and an ultrasound at 18 to 20 weeks. Pregnant women who are worried that they may have contracted the virus should speak with their obstetrician to initiate testing.

Tovar-Moll noted that the researchers are continuing to investigate the central nervous system changes induced by congenital Zika virus infection to better understand the spectrum of the changes they have seen.

“We are also interested in investigating how congenital Zika virus infection can interfere with not only prenatal, but also postnatal gray and white brain maturation,” she added.

The report provides an image-rich resource, including whole sequences of images of MRI and CT as movie files, for health care practitioners to allow them to become familiar with the spectrum of abnormalities seen with congenital Zika infection. The report can be found at  http://pubs.rsna.org/journal/radiology.