Imaging Fat of the Bone

UNC’s Maya Styner, M.D., unveils a new kind of study showing how a high-fat diet, exercise and diabetes medications can change the insides of our bones 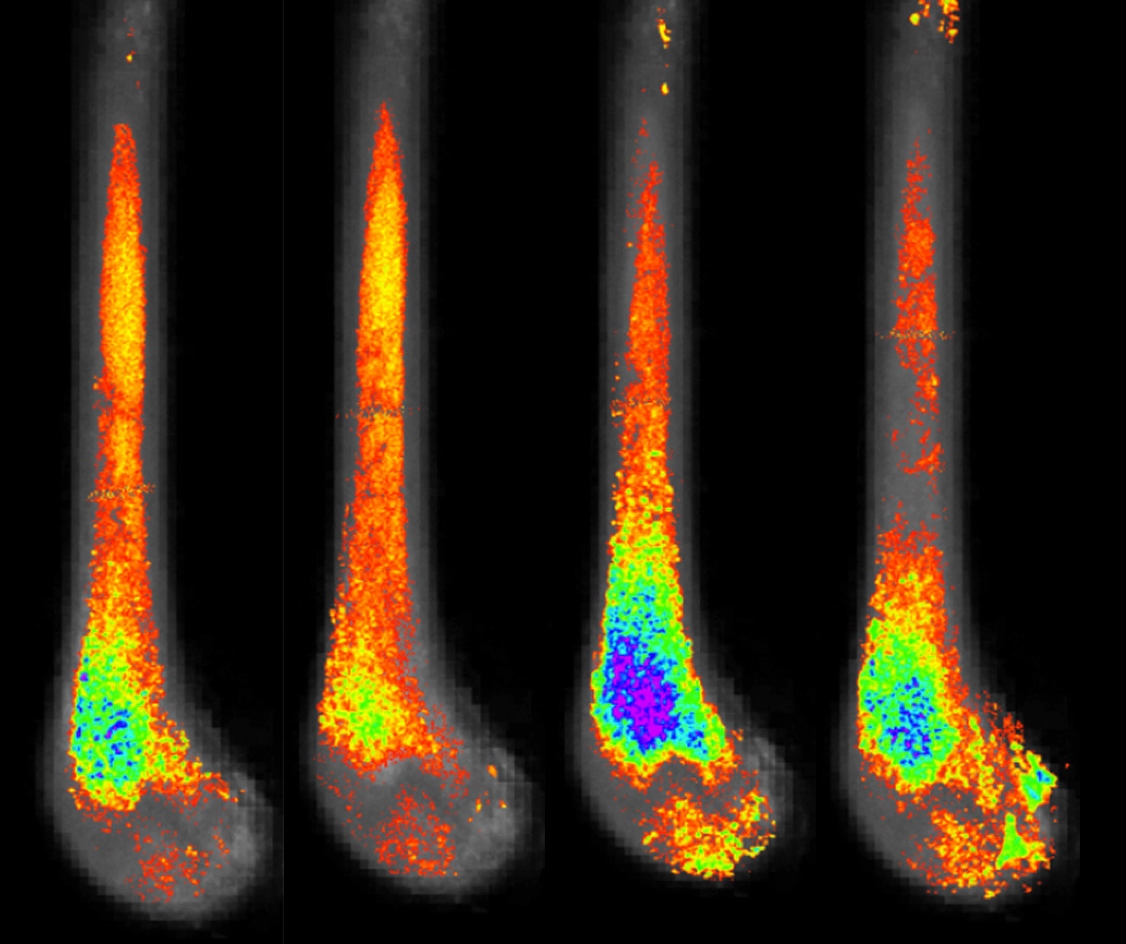 Images show the effect of exercise on fat inside bone marrow.*

July 16, 2014 — In your bones, there is fat. Why? Researchers do not know, but they have theories. How does it get there? They have theories about that, too. Is it the same sort of fat found in muscle? Not sure. Is this bone fat a bad thing? Yes. Researchers think it is. But sometimes, they say, it might not be so bad.

“This is a new field,” said Maya Styner, M.D., an assistant professor of medicine in the University of North Carolina School of Medicine. “We don’t know exactly how it’s produced or why it’s there to begin with. There are a lot of unanswered questions.”

But Styner, an endocrinologist, has used a new kind of imaging technique to answer at least two: What do diabetes drugs and exercise — or the lack of it — do to bone fat, and why does this matter?

Our bones are not stagnant, rock-like things. They change. Marrow—the tissue inside bones—is full of various kinds of cells. And marrow is also full of fat. The amounts of these cells and fats can decrease or increase over time. And the production of these marrow cells and fat depend on a specific type of progenitor cell called a mesenchymal stem cell.

“These stem cells give rise to both bone and fat,” Styner said. “For a long time in the bone world, it’s been thought that these stem cells produce bone but then, as we age, they start to produce fat, instead.”

This idea caused bone researchers to think that bone fat production might play a role in increased risk of bone fracture in elderly people.

More than that, if there is more fat, could this mean there is less of the other stuff in marrow?

“This is one reason why marrow fat is so important to bone researchers,” Styner said. “Bone marrow is a source of blood, immune cells, and malignancies.”

Yet, because bone fat is encased in bone, it is not easy to study. Measuring the amount of fat in bone, even in mouse models for instance, requires scientists to use small bone slices one at a time. These tedious methods have led to mixed results because bone slices do not give researchers a clear picture of the entire amount of fat in bone. For instance, the fat content in the bone of one animal model might be located in a slightly different location in a different model. This means researchers would need to study hundreds of bone slices just to get a decent measure of bone fat in one bone.

Styner took different approach. Her team figured out how to stain the fat in bone, which allowed her team to image the amount of fat using micro CT scans.

By decalcifying the femurs to make them more porous, Styner’s team could stain them with osmium, an element that binds to the fatty acids in lipids. The osmium staining technique, developed by Yale researcher Mark Horowitz, Ph.D., allowed Styner’s group to use micro computed tomography (CT) scans to color code the bone samples based on the density of the osmium. The denser the stain, the more fat was present. (See image)

Her team conducted the same experiment with mice fed a high fat diet. The bone fat of sedentary mice skyrocketed. But when Styner allowed other obese mice to exercise while continuing to eat a high-fat diet, their bone fat decreased significantly. In fact, the micro CT scans revealed that high-fat exercising mice had only slightly more bone fat than did normal-fed sedentary mice.

These results, published in the journal Bone, show how certain parts of bones can change from week to week — particularly the areas near our joints — and not just through diet and exercise.

This finding provides evidence for why the drug dramatically increases risk of bone fractures. What’s more, Styner found that when mice taking rosiglitazone were allowed to exercise as much as they wanted, the bone-fattening effect of the drug was diminished.

Yet, important questions remain, such as: If there is more bone fat, does that definitely mean there is less of something else — such as the marrow that drives production of cells involved in the body’s natural immune defenses?

“We’re still trying to figure that out,” Styner said. “But we couldn’t detect a significant reduction in overall amount of bone in mice with high bone fat. We did find that exercise increases overall bone quantity.”

Also, other studies have shown that people with a slightly higher than average body mass index generally have better bone density. “It’s one of the few things in clinical medicine where it’s good to be a little overweight,” Styner said.

Why bone fat is a hallmark of anorexia is not well understood, but the human body does need fat. In people with anorexia, the body seems to find a way to create it. This observation and Styner’s discoveries suggest that bone fat is a sort of fuel — an energy source much like fat in muscle.

“We’re in the infancy of understanding the metabolic role of bone marrow fat,” Styner said. “But so many drugs affect bones. Steroids — proton pump inhibitors such as prednisone — are one of the most widely used drug classes in the world and they significantly increase bone fracture. Steroids are also known to be fat inducing.”

In short courses, such as to battle poison ivy or other acute problems, steroids are effective and don’t put bones at risk. But Styner sees many patients with chronic joint pain who take steroids for long stretches of time. These patients, she said, are the ones who suffer bone fractures more often.

“I just saw a patient with a devastating hip fracture who had been on high doses of steroids,” she said. “Pretty much any rheumatologic condition treated with steroids can lead to this.”

For Styner, two future areas interest her most: the browning of white fat and how much exercise is beneficial?

So-called brown fat shares some characteristics with muscle. For instance, brown fat produces heat because there are lots of mitochondria in it. “Brown fat consumes much more energy than does white fat,” Styner said. Unfortunately, brown fat is found in small quantities in adults; it is mostly found behind our shoulder blades.

And then there is the exercise question.

“Mice are natural runners,” Styner said. “We let these mice run as much as they wanted, and they ran all day. Now we’d like to study the effect of less exercise. For instance, for us, could a two-mile walk every day decrease bone marrow fat over time?” Could the exercise equivalent of a 30-minute hard swim or an hour in the gym decrease bone fat? A lot of us would like to know, including Styner.

Funding for this research came from the National Institute of Health.