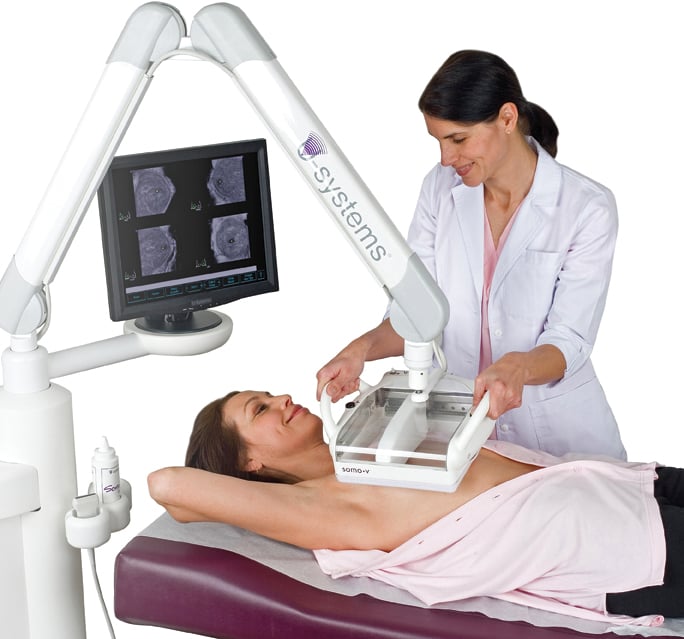 Over the last few years, new legislation mandating the inclusion of breast density findings in results letters sent to women after their mammography exams has begun appearing in a growing number of states. With three states having already enacted such laws, 17 states working on similar legislation and a federal bill recently introduced in the U.S. House of Representatives, Frost & Sullivan expects widespread breast density reporting laws to have a significant impact on the demand for and utilization of various breast screening technologies.

Shortcomings in the Current Screening Protocol

X-ray mammography has long been the gold standard for routine breast cancer screening in the United States due to its balance of costs, speed, radiation dose and cancer detection accuracy. However, with the mammography-only screening protocol that is currently in place, it is estimated that up to 35 percent of cancers are overlooked and that 10 to 15 percent of screening exams require further testing due to inconclusive results.

In the United States, mammography is regulated by the Mammography Quality Standards Act (MQSA) which, in addition to meeting specific criteria and quality standards, requires mammography facilities to notify patients about the results of their mammograms in writing within 30 days of their exam. The breast density reporting laws that are now being passed in some states require facilities to include additional information in results letters that are sent to patients who have been identified as having dense breast tissue.

While the exact wording in bills varies from state to state, in general, facilities must inform these patients that dense breast tissue can hide cancers or other abnormalities in their mammograms. Furthermore, most bills require that facilities also notify these patients of the potential benefits of supplementary screening tests.

Another key aspect of the legislation that is being passed is that approximately one-third of the states that have passed or are working on breast density reporting bills are also requiring medical insurance companies to include additional benefits and coverage for supplemental screening exams in women with dense breasts. Exams explicitly stated in bills include breast ultrasound, breast magnetic resonance imaging (MRI) and “other exams deemed necessary by a physician.”

It is important to note the technologies identified in these bills, because insurance coverage plays a key role in driving the utilization of many healthcare technologies. By the same token, considerations including costs, speed and diagnostic accuracy are equally important to providers in determining the practicality and potential profitability of each of these technologies. Accordingly, several aspects of breast ultrasound, breast MRI and other potential breast screening technologies are considered below.

Ultrasound is a key technology to watch in the wake of spreading breast density reporting legislation due to its affordable costs, widespread availability, ongoing technological advancements and significant improvements in detection accuracy when used to supplement mammography. Most breast imaging facilities already have access to breast ultrasound equipment. For those that do not, the purchase of an ultrasound system configured to perform breast imaging is inexpensive relative to other breast imaging technologies.

In terms of detection accuracy, an “ultrasound + mammography” screening protocol has been demonstrated to increase the detection of cancers in the breast by 28 percent and double the detection rate in dense breast tissue relative to using mammography alone. The ease of use and non-ionizing characteristics of ultrasound also make it an attractive option for breast screening. Moreover, advancements such as automated breast ultrasound (ABUS) continue to improve the workflow and accuracy of ultrasound.

ABUS reduces the time and operator dependency required for conventional breast ultrasound through its use of a transducer that automatically scans the breast in a few seconds, acquiring volumetric image datasets that address challenges related to dense, overlapping breast tissue. Also important to note is the U.S. Food and Drug Administration’s (FDA’s) recent approval of U-Systems’ somo-v ABUS system for breast cancer screening indications in women with dense breasts. This approval further validates the effectiveness of ABUS and ultrasound and encourages the use of these technologies in breast screening.

Similarly, the Jefferson Radiology breast imaging facility went from only 5 to 10 percent of its patients requesting supplemental breast ultrasound screenings to accumulating a backlog of more than 500 patients for this procedure. The impact of this law on breast ultrasound procedure volumes in the state was confirmed by a study conducted by the University of Connecticut, which showed that approximately half of 77,000 patients who were informed of a dense breast tissue condition in results letters returned for supplemental ultrasound screening exams.

Unlike ultrasound, MRI is very costly to purchase and operate, and procedures are expensive to perform. Exams are long and the procedure is not well tolerated by many patients due to anxiety or various contraindications. Obtaining reimbursement for MRI procedures in general is burdensome due to stringent pre-authorization requirements set forth by many payers.

While MRI is commonly used in diagnostic and therapeutic breast imaging applications, reimbursement for breast screening with MRI can be particularly challenging, given that this procedure is typically indicated only for patients meeting specific criteria that identify them as being at a significantly higher risk for developing breast cancer. Despite these drawbacks, breast imaging (though not necessarily screening) has been a rapidly growing application of MRI over the last five to 10 years. Thus, while the insurance coverage mandates included along with some states’ breast density reporting bills may help fuel this trend, the limited availability and prohibitive aspects of MRI make it difficult to imagine drastic growth in the utilization of this technology in response to the passing of new breast density reporting laws.

Other Exams Deemed Necessary by a Physician

Insurance coverage mandates pertaining to “other exams deemed necessary by a physician” in some states should also be considered, given the many imaging technologies that have potential for use in breast cancer screening. Tomosynthesis has perhaps attracted more attention than any other breast imaging technology in recent years due to its ability to improve cancer detection accuracy and reduce patient recalls when combined with mammography. This technology acquires images at several angles while sweeping along a short arc over the breast, providing several image slices that allow users to visually “scroll through” breast tissue during the review of exams.

Integrating tomosynthesis into a mammography screening protocol involves minimal changes, given that tomosynthesis scans can be acquired in less than 20 seconds during the same breast compression used for mammography. However, there are currently a number of drawbacks to this technology, including the extra time that is needed to interpret the multitude of images that are acquired, increased image data storage requirements, additional ionizing radiation per exam and a lack of additional reimbursement.

Tomosynthesis is also expensive to purchase, with only one commercial option available at this point. However, increasing price competition due to anticipated introductions of competitive tomosynthesis systems is expected to result in greater affordability of this technology over the next few years. The upgradeability of many existing mammography units to tomosynthesis also eases price burdens to some extent.

Another set of technologies to keep an eye on in the wake of spreading breast density reporting laws is molecular breast imaging (MBI), a term which describes scintigraphy- and positron emission tomography (PET)-based imaging systems developed specifically for breast imaging. MBI carries the advantages of functional, rather than anatomical, imaging, which yields information pertaining to the metabolic activity of cells within the breast and can be used to localize cancerous tissue.

While studies have demonstrated MBI’s superior capabilities in detecting cancer relative to other breast imaging technologies, the higher radiation dose that is currently associated with MBI makes it impractical for use in routine breast cancer screening. However, recent studies demonstrating considerable reductions in the dose required to perform dedicated breast scintimammography exams suggest the potential for eventual use of MBI technologies in routine breast cancer screening.

Considering the availability, inherent characteristics and reimbursement potential of each of the technologies described above, Frost & Sullivan expects shifts in the utilization of breast imaging technologies to occur in three phases over the next five to 10 years. In the near term, with spending on capital equipment in healthcare still low, most breast imaging facilities are expected to manage growing demand for supplemental breast screening with equipment to which they already have access.

Given the availability of each breast imaging technology, this is expected to result in increasing use of conventional (i.e., freehand) ultrasound systems. Ultrasound was clearly the most heavily impacted technology after the passage of Connecticut’s breast density reporting law, and the same effect is expected to be observed in states passing similar legislation.

As breast ultrasound procedure volumes and patient backlogs grow beyond facilities’ capacities to manage their workloads, facilities are expected to begin seeking more streamlined workflow solutions that will help boost patient throughputs, increase revenues and keep patient wait times down. At this point, more facilities will be able to justify the investment required to purchase ABUS imaging equipment, which addresses all of these needs. In states where mandates extend insurance to cover “other exams deemed necessary by a physician,” tomosynthesis may also see increasing adoption.

Frost & Sullivan enables clients to accelerate growth and achieve best-in-class positions in growth, innovation and leadership. Its Growth Partnership Service provides the CEO and the CEO’s Growth Team with disciplined research and best-practice models to drive the generation, evaluation and implementation of powerful growth strategies. Frost & Sullivan leverages 50 years of experience in partnering with Global 1,000 companies, emerging businesses and the investment community from offices on six continents. For more information: www.frost.com