This article appeared as the introduction to a chart on breast MRI systems in the January/February 2012 issue. 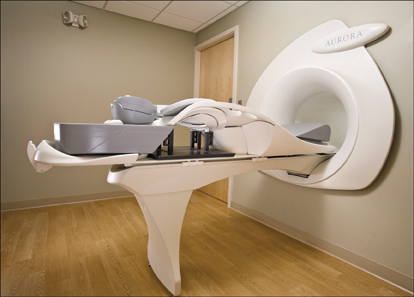 Magnetic resonance imaging (MRI) of the breast continues to get more play as an important adjunct to mammography in screening for cancer, as its diagnostic value is recognized particularly for young women with dense breast tissue.

“MRI of the breast offers valuable information about many breast conditions that cannot be obtained by other imaging modalities, such as mammography or ultrasound,” says radiologyinfo.org, the website for patients developed by the American College of Radiology (ACR) and Radiological Society of North America (RSNA). Since 2007, the American Cancer Society has been recommending that women at high risk for breast cancer get an MRI along with their yearly mammograms, and that women at moderately increased risk (this category includes women with dense or unevenly dense breasts) discuss adding MRI with their physician.

The dense breast issue is likely to remain in the spotlight into the near future, as legislative efforts are underway to require that women be given information about breast density and potential risks in their mammogram reports. Texas and Connecticut already have laws in that regard. California passed a similar bill that was subsequently vetoed by Governor Jerry Brown, but one is likely to be reintroduced in some form. And nationally, the “Breast Density and Mammography Reporting Act of 2011” (H.R. 3102.I.H.), with similar recommendations, was introduced in October 2011, sponsored by Rosa L. DeLauro (D-CT). It currently is being reviewed by the Subcommittee on Health.

Since MRI does not involve ionizing radiation, the safety of the screening is not really a factor. But it is an expensive exam, and it cannot detect calcifications as mammography does. So it is never recommended as a replacement for mammograms.

“If MRI is used, it should be in addition to, not instead of, a screening mammogram. This is because although an MRI is a more sensitive test (it’s more likely to detect cancer than a mammogram), it may still miss some cancers that a mammogram would detect,” say the ACS guidelines.

Also, because of its low specificity, breast MRI does have a higher rate of false-positive results, which can become a factor as to whether or not a woman has the exam. However, recent studies looking at MRI in various scenarios have been published and underscore its benefits.

One study pertaining to the false-positive issue found that MRI screening for breast cancer delivers consistent rates of cancer detection and fewer false-positive results over time. “The goal of our study was to determine if the availability of prior MR images for comparison reduces the rate of false-positives associated with the initial MRI breast screening exam,” said the study’s co-author, Martha B. Mainiero, M.D., director of the Anne C. Pappas Center for Breast Imaging at Rhode Island Hospital and associate professor of diagnostic imaging at The Warren Alpert Medical School of Brown University in Providence, R.I. (www.itnonline.com/article/repeat-mri-screening-breast-cancer-results-fewer-false-positives)

The study results, published in February in Radiology, showed that the rate of false-positives decreases following the initial round of screening.

Another study published in Radiology the same month showed that breast cancer screening with MRI can detect invasive cancers missed on mammography in women who have undergone chest irradiation for other diseases.

Stretching the reach of MRI for breast screening further is Dr. Steven Harms, M.D., FACR, medical director for Aurora Imaging Technology, who has been using Aurora breast MRI for the detection of all grades of ductal carcinoma in situ (DCIS). “I have been employing this technology at my practice for slightly more than two years now and have seen the clinical benefit it provides,” Harms wrote in an article that appeared in the June 2011 of ITN. “In a recent evaluation of clinical cases, the Aurora system detected 19 of 20 pathology-proven DCIS cases, nearly half of which were intermediate or low-grade.”

Breast MRI also is recognized as an excellent imaging modality for evaluating silicone breast implants. It often is used to detect or examine ruptures.