The radiation oncology market continues to progress, with new advancements such as the increased availability of proton therapy and the eagerly awaited MRI-guided linear accelerator 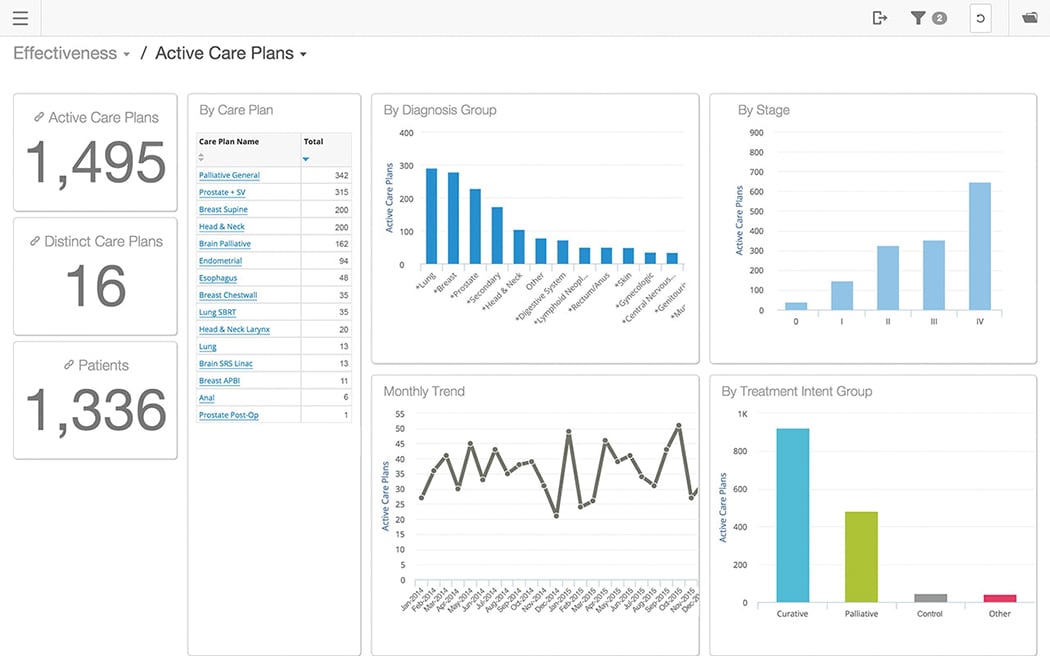 Mosaiq Oncology Analytics is a cloud-based solution that integrates with multiple systems, so the user can leverage the information within and beyond the oncology department.

In 2016, the America Cancer Society expected 1,685,210 new cancer diagnoses in the United States alone. And according to the National Cancer Institute, approximately half of all patients diagnosed with cancer will undergo radiation therapy as part of their treatment plan. Given the large number of patients turning to radiation oncology, it is no wonder there is an immense focus on continually advancing this treatment technique. Millions of lives depend upon it.

The basic goal of radiation therapy is to cause damage to the cells where the cancer is located. Healthy cells are able to repair themselves; unhealthy cancer cells, on the other hand, are unable to do so. The result is death of the cancer cells.

Over the years, radiation treatment techniques have continually focused on sparing healthy surrounding tissue while maximizing the radiation dose to the cancer cells. Treatments have become even more precise with the help of motion management tools and image guidance treatment techniques. While these are all great advancements in the treatment of cancer, the world of radiation therapy now has even more to be excited about.

There has always been a lot of useful information captured through daily activities within a radiation oncology department, but accessing this data in a meaningful fashion could be quite a task. Vendors are now finding ways to compile and format this information into actionable reports. Tools available through applications such as Elekta’s Mosaiq Oncology Analytics and Varian’s InSightive Analytics provide insight into opportunities for clinical, operational and financial improvement. Among numerous other capabilities, these enhancements include the ability to oversee resource utilization and workflow, pinpoint specific areas for cost reduction and ensure consistent quality care across a network of facilities. Information obtained from analytics tools also provides documentation to validate improvement within a department.

Traditional linear accelerators (linacs) have come a long way since Rolf Wideroe created the linear accelerator concept in 1927. Advancements over the years have allowed linacs to provide radiation treatments with millimeter accuracy. The majority of linear accelerators available today are so advanced that they have at least some form of optional stereotactic radiosurgery (SRS) capabilities.

In June 2016 Accuray announced that it had received U.S. Food and Drug Administration (FDA) clearance of its Radixact Treatment Delivery Platform. Along with this system, Accuray also introduced its new oncology information system, the iDMS Data Management System, as well as its new Accuray Precision Treatment Planning System. Building on the TomoTherapy line of products, the Radixact system incorporates a more powerful linear accelerator that allows treatments of up to 1,000 MU per minute, providing improvements to treatment speed and efficiency. The integrated iDMS Data Management System and Accuray Precision Treatment Planning System further improve the treatment process by streamlining workflow and reducing the time required to create treatment plans.

At the 2016 American Society of Radiation Oncology (ASTRO) annual meeting, Varian Medical Systems introduced its HyperArc High Definition Radiotherapy Technology (HDRT). Key benefits of this technology include the ability to offer radiosurgery to a broader range of patients as well as provide improved quality of treatments. Varian’s hope is that this technology will increase access to radiosurgical procedures. HyperArc HDRT is specifically designed for Varian’s TrueBeam or EDGE treatment delivery systems in conjunction with its PerfectPitch six degrees of freedom (6-DoF) couch. Pending U.S. Food and Drug Administration (FDA) 510(k) clearance, a September 2016 press release stated that Varian anticipates this technology will be available sometime in 2017.

Image guidance has proven to be a useful tool to ensure the radiation dose is being directed at the target location, improving both the precision and effectiveness of radiation treatments. However, most current techniques require that the patient be exposed to additional radiation in order to capture the images utilized through this treatment method. Replacing these X-ray images with images acquired through magnetic resonance imaging (MRI) allows real-time visualization of the treatment site without any added radiation dose to the patient.

In May 2012, ViewRay made history by receiving FDA clearance for the world’s first MRI-guided radiation treatment delivery system capable of image acquisition and treatment at the same time. ViewRay’s MRIdian system utilizes a 0.35 Tesla field strength in combination with three Cobalt-60 sources, each outfitted with its own set of 60 multileaf collimator (MLC) leaves.

Currently in the research stage, Elekta and Philips have partnered together to create the world’s first high-field MRI-guided linear accelerator. Elekta’s system features its advanced digital linear accelerator in combination with Philips’ high-field 1.5 Tesla MRI which has a field strength comparable to that used in diagnostic MRI imaging studies. The higher field strength in this system creates the opportunity to utilize advanced MRI techniques, such as functional imaging, that can reveal information on the biology of tissues. According to a December 2016 press release Elekta anticipates regulatory clearance (CE mark) for its MRI-guided linear accelerator sometime in the second half of 2017.

Proton therapy was first used as a treatment technique in 1955. Unlike linear accelerator treatments, which utilize X-ray photons, the mass of protons allows them the unique ability to release the maximum amount of energy at a specified depth. This means that the highest dose of radiation can be calculated for release at the tumor site and then stop. Because protons help spare healthy surrounding tissues from radiation exposure, treatment precision is increased, while side effects of the radiation treatment are often reduced.

Rachael Bennett joined MD Buyline in 2008 with seven years of clinical experience in the medical field. She is the primary clinical analyst for linear accelerators, stereotactic radiosurgery, mammography systems, biopsy systems and other radiation oncology and women’s health capital equipment. She currently holds registries as both a radiographer and radiation therapist through the American Registry of Radiologic Technologists (ARRT).