Tomosynthesis: The Next Big Leap in Breast Imaging 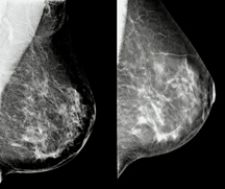 The atrium of Dartmouth-Hitchcock Medical Center at Dartmouth College, one of the leading teaching hospitals in the country

Dartmouth-Hitchcock Medical Center at Dartmouth College, one of the leading teaching hospitals in the country, offers cutting edge mammogram technology to their patients thanks in part to the Hologic Selenia digital mammography system. Working with Hologic, the Center is also actively involved in researching what is believed to be the next wave in mammography technology: tomosynthesis.
It’s All About Image Quality
“From my perspective,” said Dr. Steven Poplack, co-director of the Breast Imaging Center at Dartmouth and an associate professor at the Dartmouth Medical School, “it’s all about image quality. With the Selenia system, there was no question…the digital image quality was superior. And that’s why we went with it.”
Because the radiologist can easily manipulate the contrast on the Selenia system, they are seeing much more detail, in much less time. Greater contrast control is especially important when dealing with patients with denser breast tissue, or implants. These patients, in the past, had presented challenges for both technologists and radiologists.
“We use it on everyone. It’s wonderful, no matter the age, the size or the composition of the breast. It gives a beautiful picture,” said Jenny Kagan, staff technologist at Dartmouth-Hitchcock Medical Center.
“We wouldn’t trade it for the world,” says Joyce Wagner, RT (R)(M), who is the lead technologist of the mammography section at Dartmouth-Hitchcock. In fact, Dartmouth has been so impressed with the Selenia technology, that they recently put in their fourth system. “We’re replacing our last analog system with the new Selenia,” Wagner said. “We are going to be all digital and all Hologic.”
A Positive Impact on Patient Care
While the advantages of Selenia are obvious to the doctors and technologists using the system, it has also had a positive impact on the women who come to Dartmouth for mammograms.
Because digital technology has eliminated the errors associated with the analog film process and reduced the number of callbacks because of those errors, it has gone a long way toward alleviating much of the anxiety associated with mammograms. “Most patients are anxious when they come for these exams,” said Jim Roberts, clinical operations manager and interim administrative director for the Department of Radiology at Dartmouth, “but the fact that we don’t have any film issues, which means we do far fewer repeats, tends to just make the patients feel that much more comfortable.”
Since there is no film, the techs don’t need to leave their patients for image processing and images are available in seconds right in the examination room. “Just those few minutes of waiting created a lot of anxiety,” said Kagan. “Now, they seem much happier by the whole process…and, I think, more likely to come back for their mammograms every year.”
One of the most important benefits to patients remains unseen. “Digital mammography can be performed with less radiation exposure to the breast than analog, and it does so while still maintaining excellent image quality,” noted Dr. Poplack.
The Promise of Tomosynthesis
Dr. Poplack believes that the future of breast imaging may already be here, with the emergence of digital tomosynthesis technology for screening and diagnostics. “We’re looking at tomosynthesis,” said Poplack, “as the next huge leap in our (breast imaging) technology.”
Tomosynthesis uses the digital platform to capture a series of images, exposed in an arc around the breast. The data collected is then reconstructed into a detailed three-dimensional image of the breast. Similar to a CAT scan, the reconstructed images are made up of a series of thin slices, which can be manipulated and viewed in a number of different ways for more detailed analysis.
In a study performed at Dartmouth-Hitchcock, and presented by Dr. Poplack at the 2005 RSNA in Chicago, tomosynthesis showed excellent clinical promise. The study involved approximately 100 women who were recalled because areas of concern had appeared on their initial mammograms. The study found that almost half of the women in the study would not have been recalled had the original screening been done using tomosynthesis.
“A lot of the problems with mammography stem from tissue overlap,” Poplack said, “but if you can unravel the tissue or eliminate the overlap, then you can avoid recalling a lot of patients who don’t really need to be recalled. Tomosynthesis is going to reduce the number of false positive screening exams.”
Because the images can be taken apart and examined individually, tomosynthesis is also expected to detect cancers earlier than with standard mammograms. “In some instances,” Poplack said, “overlying tissue may be obscuring a small cancer. By being able to get a slice-by-slice look at the breast, you may then uncover the cancer that was hidden by the overlying tissue.” He added, “Tomosynthesis will probably allow us to find more breast cancers earlier.”
Unlike many new technologies, tomosynthesis is based on established radiographic technology and procedures, which will allow it to be adopted and used by physicians and technologists more easily.
CAUTION- Tomosynthesis is an investigational device.  Limited by United States law to investigational use.