Picture Emerges of How Kids Get Head Injuries 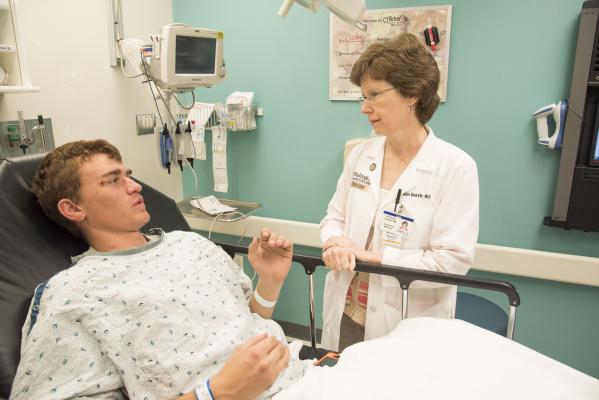 Kimberly Quayle, M.D., professor of pediatrics at Washington University School of Medicine in St. Louis, talks to patient Braden Clark of Vandalia, Ill., at St. Louis Children's Hospital. Braden suffered a head injury in a fall from a ladder. Quayle co-authored a study that looks at head injuries in children and teens. Credit: Robert Boston/Washington University

A study in which more than 43,000 children were evaluated for head trauma offers an unprecedented picture of how children most frequently suffer head injuries, report physicians at Washington University School of Medicine in St. Louis and the University of California, Davis, School of Medicine.

The findings also indicate how often such incidents result in significant brain injuries, computerized tomography (CT) scans to assess head injuries, and neurosurgery to treat them.

However, the causes of such injuries in children ages 13-17 were more varied, said first author Kimberly S. Quayle, M.D., professor of pediatrics at Washington University.

Among children who suffered brain injuries as a result of motor-vehicle accidents, fewer than half wore seat belts. And children with head injuries caused in bicycle crashes wore helmets less than 20 percent of the time.

The findings could help policy makers take steps to help prevent such injuries and will provide physicians with data that may improve safe diagnoses of children with head injuries.

The study appears Nov. 13 in The New England Journal of Medicine.

Previous research has shown that traumatic brain injuries are the leading cause of death and medical complications in children older than 1 year. But details about such injuries -- from how they're caused to what role age might play — have been lacking.

"We have distilled a wide range of important features regarding blunt head trauma in children," Quayle said. "The findings may provide reliable guideposts in developing injury-prevention measures and should help physicians in diagnosing and treating these injuries based on strong evidence."

The new findings stem from a trove of data collected from 2004-06 from the emergency departments of 25 U.S. hospitals, including St. Louis Children's Hospital. The initial study was conducted via the Pediatric Emergency Care Applied Research Network (PECARN), a federally funded research network that focuses on the prevention and management of acute illnesses and injuries.

"The detailed information from this very large prospective study is not available from any other source," said senior author Nathan Kuppermann, professor and chair of emergency medicine at UC Davis and principal investigator of the initial study. "It is a gold mine of information, providing a detailed description of the full breadth of pediatric head injuries."

The new analysis included children with head injuries of all severities -- from deep coma to normal neurologic status -- and categorized the injuries as mild, moderate or severe, based on the Glasgow Coma Scale (GCS), a scale commonly used by physicians to assess the mental status of trauma victims.

Of the 43,399 patients in the study, 98 percent were determined to have mild head trauma. During diagnosis and treatment, however, cranial CT scans were performed on 37 percent of the children — many arguably unnecessarily, given the nature of the injuries, Quayle said. CT scanners use X-rays to produce detailed images, but in doing so, they subject patients to doses of radiation that may increase the risk of cancer later in life.

The CT scans taken of children in the study revealed that traumatic brain injuries were identified in only 7 percent of the children scanned, suggesting that CT scans may be overused during diagnosis. An additional 3 percent had skull fractures without brain injuries.

"The original study was designed to identify children at low risk for brain injury who do not require CT scans, because of the concerns of radiation and the costs of unnecessary testing," Quayle said. "Criteria that suggest a low risk of traumatic brain injury and observing a child before resorting to a CT scan can reduce the use of unnecessary scans." 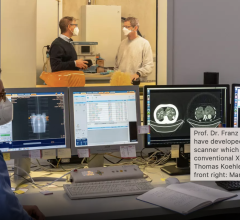 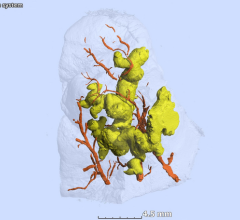