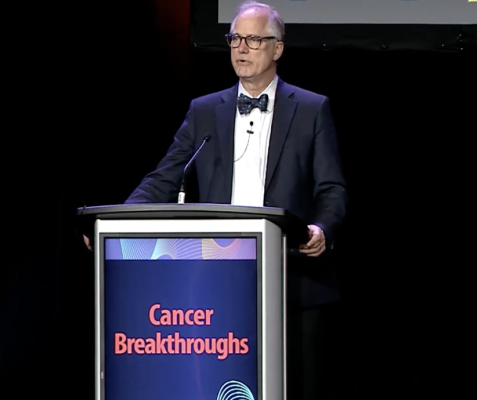 In his Oct. 26 address, Michalski, Department of Radiation Oncology, Washington University School of Medicine, noted that the Cancer Breakthrough session was developed and held for the first time in Chicago in 2019 at the 61st annual meeting of ASTRO. Its intention is to bring together different medical societies in a collaborative effort to provide a summary of the year’s groundbreaking cancer studies. He stated, “It is important for the field of oncology to join forces while facilitating the synthesis of information in a way that can be put into practice promptly and globally.”

As such, Michalski welcomed Everett Vokes, MD, FASCO, President of the American Society of Clinical Oncology (ASCO), and Martha Matuszak, PhD, who serves on the Board of the American Association of Physicists in Medicine (AAPM).  The editorial team at DAIC and dicardiology.com is covering these important multi-societal sessions in two articles to focus on key findings.

Representing the American Society of Clinical Oncology (ASCO) was Everett Vokes, MD, Department of Medicine, Section of Hematology/Oncology, University of Chicago. The 2021-2022 ASCO President, Vokes offered a comprehensive overview of findings from multiple studies which were presented during the ASCO 2022 meeting in early June in Chicago. He reported the event drew more than 40,000 participants, 30,000 live and 11,500 virtually. The theme, he noted, “Advancing Equitable Cancer Care through Innovation,” was based on an emphasis on equity and diversity, and the hope that post pandemic there would be a recover that would bring substantial innovation in many areas.

Observations and opportunities for oncologists from ASCO

“Equity and innovation should remain at the forefront of oncology,” urged Vokes. He added, “This is something that we need to pay attention to, and be available and accountable to all of our patients.”

Vokes summarized the primary findings presented during ASCO2022, including:

Findings of three key studies which address the equity them were also summarized. Results of the “Increasing Black Participation in Metastatic Breast Cancer Clinical Trials,” or the Black Experience of Clinical Trials and Opportunities for Meaningful Engagement, or the BECOME Project were shared. Vokes noted it was very much clear that black patients want to be better informed, and need an environment that will inspire trust. A focus was also placed on ensuring access and openly addressing concerns about costs and coverage of trial participation.

Vokes shared research conducted at Dana Farber Cancer Institute, Boston Children’s Cancer and Blood Disorders Center, by Puja Umaretiya, MD. “Racial, ethnic, and socioeconomic factors and survival disparities among children with high-risk neuroblastoma treated on upfront Children’s Oncology Group clinical trials” these were children treated on protocols of the COG, so that treatment is standardized. Despite that, an observation was made that Hispanic patients had less benefit from this intervention. It was not clear this had anything to do with protocol adherence, as it did not, though there was a suggestion that it had to do with poverty. However, even in multi-modality analysis did not substantiate this, but the suggestion clearly was that this was worth looking into more thoroughly. They concluded Hispanic children with neuroblastoma had an inferior survival rate compared to other children – despite access to uniform planned treatment and after controlling for disease-associated factors. The authors wrote, “describing racial and ethnic disparities is not enough; we must identify mechanisms that cause inequitable outcomes.”

Clinical trials of new drugs and particular treatment comparisons from ASCO2022 were also summarized, including a new standard of care in HER2-low mBC.

A particularly well-received abstract dealt with a plenary presentation at ASCO on breast cancer. Conducted by Shanu Modi of Memorial Sloan Kettering Cancer Center, the DESTINY-Breast04 trial was a Phase III randomized study involving patients with HER2-low unresectable and/or metastatic breast cancer, comparing Trastuzumab deruxtecan (T-DXd) versus treatment of physician’s choice. This dealt with unmet clinical need of low HER2 patients. What is currently considered HER2 positive is a small group that is approximately 20%, but there is a substantial group of patients who have very low expression to be considered treatable with HER2 agents. The new paradigm is that that group can benefit, so an additional 50% or more patients can be added to the group of those who can benefit from targeting HER2.

The researchers concluded: “T-DXd is the first HER-2-targetd therapy to demonstrate unprecedented statistically significant and clinically meaningful improvement in PFS and OS versus TPC. DESTINY-Breast04 establishes HER2-low mBC as the new targetable patient population, with T-DXd as the new standard of care.” Vokes noted that this was the one abstract that got a standing ovation from the audience at the time it was presented at the meeting.

A plenary session abstract on the Phase 3 Paradigm Trial which looked at patients with RAS wild-type metastatic colorectal cancer. Question addressed compared Panitumumab plus mFOLFOX6 versus Bevacizumab plus FOLFOX6 as first line of treatment. This was the first prospective trial to test the superiority of the former against the latter, and was authored by Takayuki Yoshino et al. The researchers concluded that the trial met the primary endpoint, demonstrating the superiority of first-time panitumumab versus bevacizumab in combination with FOLFOX6 in the left-sided and overall mCRC populations. This establishes this as the first-time standard of care at this point, noted the authors.

Adjuvant Chemotherapy Guided by Circulating Tumor DNA Analysis in Stage II Colon Cancer: The Randomized DYNAMIC Trial, a randomized Phase II trial, by Jeanne Tie, et al addressed ctDNA-informed management. The researchers noted that no clear overall survival benefit in adjuvant therapy trials has yet to be established. Frequently there is toxicity and cost associated, so ctDNA may be a tool to broaden this, and help identify the patients who can benefit, as it detects minimal residual disease. If the patient had ctDNA positivity, they received the chemotherapy, and if they didn’t, they did not receive the therapy. While this randomized Phase II trial was exploratory, a ctDNA guided approach seemed to allow for substantial reduction in the proportion receiving adjuvant chemotherapy. Further, the study found, patients with a positive ctDNA after surgery may derive RFS benefit from adjuvant chemotherapy. Ongoing trials (e.g. COBRA, CIRCULATE, CIRCULATE-PRODIGE) will provide further guidance regarding the optimal use of ctDNA-informed management.

A late-breaking abstract by Andrea Cercek, MD, Memorial Sloan Kettering Cancer Center, was also summarized. In  the widely-covered “PD-1 blockade as curative-intent therapy in mismatch repair deficient locally advanced rectal cancer,” study, the hypothesis was that PD-1 Blockade could replace chemotherapy, or maybe chemo and radiation, or possibly chemo, radiation and surgery. The conclusions drawn by the researchers were that the data provides the framework for immuno-ablative therapies; it highlighted the clinical impact of biomarker driven therapy in early-stage disease; the tumor agnostic mismatch repair deficiency population of early-stage disease has the potential to eliminate the need for chemotherapy, radiation, and surgery in 3-4% of all cancers; and that this has the potential to be translated rapidly into areas around the world without access to modern chemotherapy, radiation ad surgery. This was a single institutional trial, early and very exploratory, but multi-institutional participation could prove useful, the authors noted.

Representing the American Association of Physicists in Medicine (AAPM) was Martha Matuszak, PhD, University of Michigan, Laurie Snow Research Professor, Associate Chair for Physics, Director of the Physics Division, Clinical Professor. The summary of multiple and important research findings she provided to the ASTRO2022 Clinical Breakthroughs session will be featured in a second article at www.itnonline.com.