Emergency departments use multislice CT to triage trauma patients. Excerpted from an article appearing in the June 2006 issue of Imaging Technology News magazine. 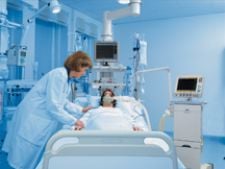 SERVO-i by Maquet is an example of the highly automated functions available. The system supports both invasive and noninvasive ventilation, and can be customized to meet the needs of neonatal, pedicatrics, adults or all patient categories.

When mechanical ventilation is initiated for surgical and acute-unit patients, protecting the fragile lungs while assisting or performing the respiratory function is paramount. Developments in automation of ventilators today largely facilitate important aspects of airway management and support clinical decision-making, but the skill and knowledge of the respiratory therapist or attending physician remains the essential, driving engine in this vital area of patient care.
According to a 2005 article in the Cleveland Clinic Journal of Medicine, the incidence of acute respiratory failure requiring mechanical ventilation increases nearly 10-fold between the ages of 55 and 85. As more of the population ages, this means greater numbers of patients will rely on greater numbers of generalists — general internists, surgeons and anesthesiologists — to skillfully manage mechanical ventilation as well as promptly recognize and treat complications.
Ventilator-associated pneumonia is a risk that has received high-profile attention recently, and hospitals around the country are instituting aggressive prevention strategies — these tend to revolve around the principle that the sooner patients are weaned off of mechanical ventilation the better.
But another serious danger associated with mechanical ventilation is auto-positive end-expiratory pressure (auto-PEEP), occurring frequently in patients who receive full or partial ventilatory support as well as those who are ready to be weaned from a ventilator, according to the September ‘05 article authored by Majid Mughal, M.D., et al. The authors indicate that auto-PEEP is more common in critically ill patients than once believed, and occurs in up to 35 percent of patients, even those in whom there is no significant history of wheezing or COPD (chronic obstructive pulmonary disease).
In order to understand auto-PEEP, PEEP must first be defined: Positive end-expiratory pressure (PEEP) is pressure in the alveoli at the end of exhalation that is greater than the atmospheric pressure. During normal, passive exhalation, the lungs empty by elastic recoil, the Mughal paper explains. But, for a variety of reasons, the lungs sometimes do not fully deflate before the next breath begins, and the pressure remains elevated. PEEP — a control setting on new ventilators — can be externally applied, but when it rises inadvertently, it is called auto-PEEP (and is also referred to as occult or intrinsic PEEP).
“Auto-PEEP simply means that there are parts of the lung still emptying at the onset of the next breath,” explained James Ramsay, M.D., associate professor of Anesthesiology and chief of Service at The Emory Clinic, Atlanta.
According to the Mughal group, the mechanical causes of auto-PEEP are:
• Increased resistance to expiration, (e.g., in a patient with asthma or COPD)
• A large volume of air delivered per minute by the ventilator
• A short expiratory time
• A combination of these factors
Recognizing the Signs
To diagnose auto-PEEP in mechanically ventilated patients, the Cleveland article recommends that doctors should watch for four practical clues that may be signaling its onset:
(1.) Exhalation that continues until the next breath starts, as determined on physical examination or on graphic display of expiratory flow versus time in a patient on a ventilator that is set to deliver a certain number of breaths per minute.
(2.) A delay between the start of inspiratory effort and the drop in airway pressure or the start of machine-delivered flow in a patient on a ventilator that is set to deliver breaths on demand
(3.) Failure of peak airway pressure to change when external PEEP is applied.
(4.) In paralyzed or heavily sedated patients, reduction of plateau pressure after prolonged exhalation.
Auto-PEEP is not so much a function of volume or pressure settings on the ventilator as it is of respiratory rate and the inspiratory-to-expiratory (I to E) ratio. Adding external PEEP — which is a programmable function on ventilators today — treats auto-PEEP, according to the Mughal article.
“A big advance in ventilators is the automated ease of adding PEEP,” said Dr. Ramsay. “In the earlier days of anesthesia ventilators, PEEP was an add-on mechanical device that you had to insert in the expiratory limb — it would be some kind of special device that would add positive pressure at the end of expiration. With the new ventilators, there is just a dial and you can put it very easily on 100 percent of patients if you want.
“What the ICU has taught us over 30 years is that it is actually more important to give modest tidal volumes and end-expiratory pressure — PEEP,” he continued. “Instead of giving big volumes, you are better off giving smaller volumes and probably everybody is better off with a little bit of PEEP.”