Proton Therapy: Protons on The Verge...

Protons offer advantages over photons in radiotherapy, but there are constraints to their widespread adoption 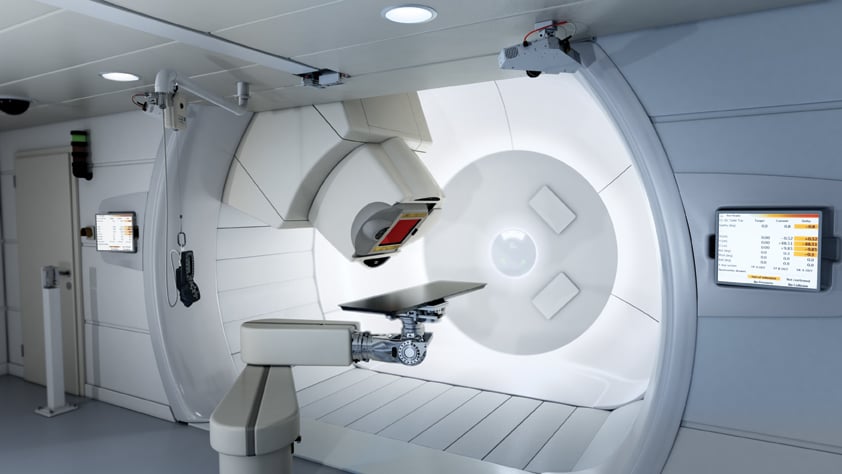 Miniaturization is everywhere in imaging. Portable X-ray. Rolling, rapid scan computed tomography (CT). Handheld ultrasound devices. But some things just don’t miniaturize very well. Tabletop foosball is not tiny soccer…and anyone who has ever tried to type more than a few sentences on their tiny smartphone will tell you that it’s not the same as a full-sized keyboard. Yes, for some things, bigger is better. And perhaps on the top of that list is proton therapy.

Proton therapy is a variant of conventional external beam radiation therapy or stereotactic radiosurgery. Whereas traditional radiation therapies use X-ray photons as the “ammunition” to target tumors, proton therapy uses the significantly more massive proton to try to decimate diseased tissues. From a patient benefit standpoint, there’s more to proton therapy than just “bigger bullets” targeting tumors, it is also that the collateral risks to the patient are lower.

Conventional linear accelerators (linacs) rotate around the patient (or, with new versions, move with several degrees of freedom on articulated robotic arms) to aim their accelerated photons at the target tumor from several different angles. This is necessary because the damaging energy from the beam gets absorbed as it penetrates, so that the skin gets significantly more ionizing radiation than the tumor below from any single “zap.” But by rotating around the body, the dose to the tumor can be increased without doubling-up the dose delivered to surface tissues. This strategy seeks to minimize the dose to healthy tissues while optimizing the killing dose that the tumor receives.

Protons, by contrast, tend to shed the vast majority of their energy at a depth determined by their speed. Protons are far more similar to depth charges than the bullet analogy that we use for photon-based radiation therapy, doing significantly less damage to surface tissues for the amount of energy deposited deeper at the tumor. By adjusting the speed of the protons being fired at the patient, the system can be adjusted so that the “depth charge” goes off within the tumor, doing maximal damage to it while dramatically reducing the dose given to healthy tissues.

Constraints to Widespread Adoption
So if proton therapy is both safer and more effective, why hasn’t it overtaken conventional radiation therapy?

As with any new therapy, the body of evidence on the clinical effectiveness is still being developed. There are a few cancers that are particularly challenging for conventional photon-based systems for which there is a clear, demonstrated benefit to proton therapy (cancers near X-ray-sensitive organs, such as the eyes, or near structures that may be significantly damaged by scatter radiation, such as some prostate cancers, for example). Others are still in the grey area of comparative benefit, hopefully to be better illuminated with greater numbers of patients. But comparative benefit, alone, is a difficult justification for proton therapy to replace photon therapy systems because of what is involved in proton beam facilities.

Anyone familiar with radiation therapy vaults — and the meter-thick concrete walls that more closely resemble military bunkers than healthcare facilities — knows how different these rooms are to virtually every other part of a hospital’s construction. Most radiation protection elsewhere in the hospital is managed with millimeter-thick sheets of lead, so a meter of concrete shielding can be pretty startling. But this doesn’t hold a candle to the requirements for proton therapy shielding, which can make bomb shelters look flimsy by comparison.

The step up in energy from photons to protons gives an indication of the comparative need for shielding. And unlike the self-contained acceleration and delivery package of conventional linac radiation therapy systems, the size of proton therapy accelerators (cyclotrons weighing hundreds of tons) and the enormous gantries needed to support magnetic beam-shapers and delivery nozzles combine to dwarf the size and scope of conventional vaults.

The size of proton therapy systems means that there is no way they could fit within the footprint of existing linac suites within hospitals, so the notion of retrofitting the new technology into existing infrastructure just won’t work. For the time being, at least, proton therapy facilities will remain purpose-built. Whereas a conventional linac vault and equipment might cost a few million, proton beam facilities currently cost about $150 million to construct.

At present, there are about 10 operational proton beam systems in the United States, most affiliated with major academic medical centers. These centers do draw patients from all over the world, but the size, cost and complexity of the facilities are significant hurdles to widespread adoption.

When proton facilities cost more than 10 times what conventional linac suites do, any comparative benefit argument will need to be very compelling before proton therapy grows beyond a specialty niche segment of the cancer therapy market. Either that, or the capital costs will need to be dramatically reduced.

For the time being at least, proton therapy will serve as a specialized adjunct offering to conventional radiation therapy systems which — though still expensive to site — are far more financially accessible to providers of cancer therapy services.

Scott Branton, RA, is a senior project manager for RAD-Planning, a design consulting firm for medical imaging projects. He is a frequent presenter at national radiology and healthcare design conferences on issues related to the design and construction of imaging, nuclear medicine and therapy facilities.
Tobias Gilk is senior vice president of RAD-Planning and president of Mednovus, an MRI safety company. He has designed imaging facilities for hospitals, research institutions, outpatient centers and universities. He writes and speaks internationally on the importance of effective radiology architecture and planning for effective healthcare.