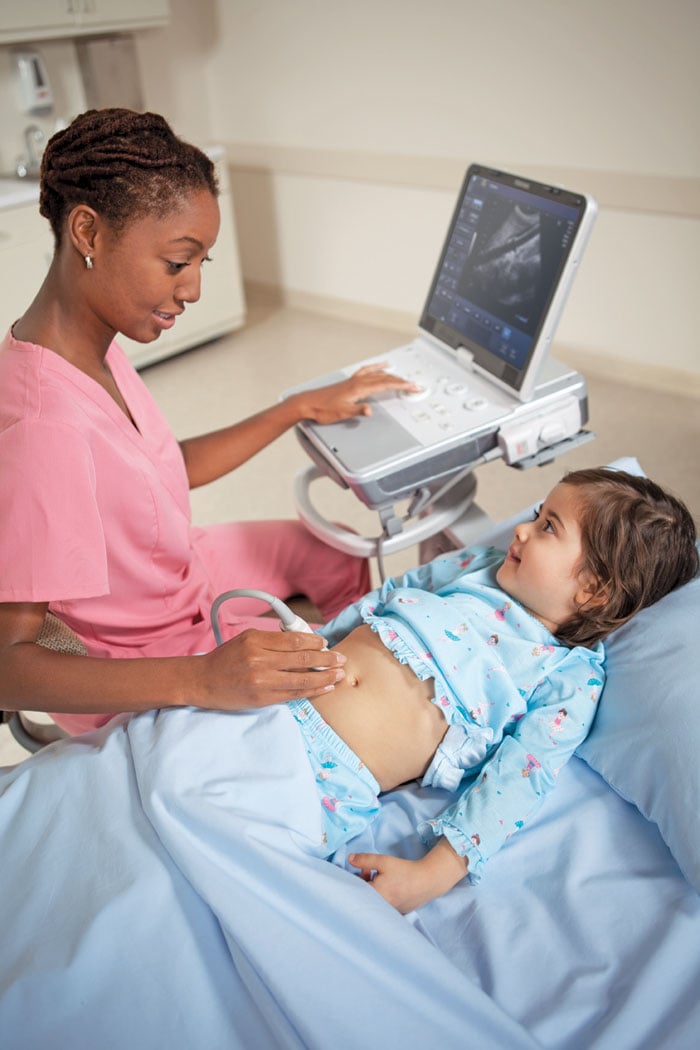 As one might expect, pediatric imaging presents a unique set of challenges compared to working with adult patients. Patient size, growth and development, and a distinct set of injuries and diseases all enter into the equation for pediatric radiologists.

Taking a deeper dive into the specialty, however, reveals the need for similar skill sets and the existence of similar issues, particularly in terms of radiation exposure, that create a symbiosis between pediatric imaging and its parent discipline.

When it comes to caring for pediatric patients (generally defined as infants through 18-year-olds), there ultimately is no such thing as a one-size-fits-all approach because the age range is so large. "We take care of a patient population that ranges from less than 1 kilogram to over 100 kilograms," said Donald Frush, M.D., FACR, John Strohbehn Professor of Radiology at Duke University School of Medicine and member of the Board of Directors for the Society of Pediatric Radiology. "So you're talking about two orders of magnitude in terms of size."

And patients aren't going to stay the same size either, so pediatric specialists have to have a deep understanding of how children grow and develop. As organs and bones grow and shift, and the body processes change, their appearance in an imaging exam will change considerably as well. "Basically a liver's a liver in a 600-pound person and a 100-pound person," Frush said, "but the liver might be quite different in a young child than it is in an older child or an adult."

Just as importantly, the nature and extent of pediatric injuries and diseases varies greatly from adults. And often times, the patient themselves cannot or will not tell you what's wrong. "Pre-verbal children and young children are much different historians than someone who can say, "˜This is where I hurt, this is how long I've hurt and this is what I think is going on'," said Frush. As a result, the healthcare team is forced to rely on their own observations and those of the parents or guardians.

Radiation exposure is another major factor when choosing the appropriate imaging exam for a pediatric patient, just as it is with adults. While the concept of dose reduction has become a center-stage issue in the greater radiology community over the last several years, pediatric radiologists say it has always been at front of mind for their practice. "Pediatric providers have always been very cognizant of limiting radiation exposure for their patients," said Frush. "In fact, I think it's safe to say the pediatric community drove the current focus on dose in the adult community."

For example, Frush added, if the radiologist is looking for an abscess in an adult patient, they would do a computed tomography (CT) scan; if the patient is a child, ultrasound will likely be the modality of choice to eliminate any unneeded radiation exposure.

Despite the ongoing concern, X-rays are still the most commonly ordered study for children, according to Janet Reid, M.D., FRCPC, chief of radiology education at The Children's Hospital of Philadelphia. "It's not that we're going to throw away radiation altogether because the radiation dose for radiographs is pretty low, and it makes no sense to throw away X-ray when you're dealing with things like bone fractures," she said.

And while the adult radiology community has begun implementing clinical decision support to assess the appropriateness of an ordered exam, pediatrics has been using its own informal system of decision support for a long time. "You get on the phone or you make contact, you sweep the list the night before and make sure everything that's ordered is appropriate, and if it's not, you get on the phone to the clinician," said Reid.

This process, along with the increased reliance on the patient's family to reach a diagnosis, is a prime example of how a pediatric radiologist's role differs from their adult counterpart. "There's more of a clinical focus than with other radiology services," Reid said. "You're much closer to the patient and the family, and you work very closely with the doctors."

While there are enough differences in pediatric radiology to call it its own subspecialty, the line is more blurred than one might expect, as the majority of pediatric cases are handled by adult radiologists. Reid estimates the number is as high as 75 percent, while Frush puts it at 85 percent. "There are just not enough pediatric radiologists to image all the kids in the country," Frush said.

The challenge lies in justifying the value of radiological specialists in terms of relative value units (RVUs) as U.S. healthcare shifts toward a value-based reimbursement system. At The Children's Hospital of Philadelphia, according to Reid, each pediatric patient coming in for a magnetic resonance imaging (MRI) exam is scheduled for at least a one-hour appointment, including sedation, scan time and recovery. An outpatient adult service may be able to see three patients in that period of time. Under these circumstances, it often makes more financial sense to add these appointments to a current radiologist's schedule rather than hiring a pediatric specialist.

The model is beginning to change though, said Reid, as she sees two things happening:

1. Healthcare enterprises are building more freestanding children's hospitals (often in facilities that previously had a blend of services); and

2. Pediatrics departments are bringing more radiologists into the system.

"It says to me that not only has the volume of work increased ... but the complexity has also increased and therefore the need to subspecialize and bring in more people to support subspecialty services in pediatrics," she said.

The rapid technological advance of numerous imaging modalities over the last several years is likely a source of the growth in pediatrics, according to Reid. As previously mentioned, X-rays still see the highest order volume, but ultrasound and MRI, in particular, are making major strides.

Frush and Reid both agree that ultrasound is one of the first-line tools for pediatric radiologists after X-rays. Ultrasound offers a number of advantages, including:

"¢ Improved definition on organs and structures; and

"¢ The ability to use higher-frequency transducers.

One of the newer practices in ultrasound - both in pediatric and general imaging - is the use of elastography, which involves using sound waves to assess tissue stiffness. This is particularly useful for cancer detection, as tumors are often characterized by harder tissue. On its own, stiff tissue is not always an indicator of cancer, but it provides another clue for the healthcare team to follow.

GE is one of several vendors that have recently added elastography to their ultrasound capabilities, receiving U.S. Food and Drug Administration (FDA) approval for a shear wave elastography module on its Logiq E9 system last December.1 Shear wave is one method of elastography that provides quantitative measurement of tissue elasticity in kilopascals or centimeters per second, unlike strain imaging which only indicates areas of greater or lesser resistance.

The drawback with using high-frequency transducers, however, is that typically the sound waves will only be able to penetrate to a certain depth, meaning one transducer will likely not be able to handle all applications. To solve this issue, pediatric radiologists employ a concept known as tissue harmonics imaging (THI). In use for some time in adult radiology, THI transducers generate multiple frequencies, allowing more complete image acquisition.2

Also helping pediatric radiologists see a clearer ultrasound picture is the accelerating use of contrast agents in the modality. Contrast-enhanced ultrasound has been in use for some time already, but the pediatric community is starting to see a greater variety of agents trickle down for their use.

These are not necessarily new agents just entering the market, however: Many of the contrast agents utilized by pediatric radiologists across all modalities are not specifically approved for use in children by the U.S. Food and Drug Administration (FDA); they are simply rolled over and used off-label. "We do it all the time and we've done it for decades," said Frush, pointing to high costs and the difficulty of gaining institutional review board (IRB) approval.

MRI has also seen significant advances in recent years, incorporating higher-strength field magnets to change pulse sequences, allowing full image capture in just seconds. This technology is particularly useful for pediatric imaging, as children may not need to be sedated for such a short length of time.

Motion reduction technology offers another solution to this age-old pediatric imaging issue. Philips released the Ingenia 1.5T S MRI scanner in December 2014, basing the design around the idea of "First Time Right" imaging.4 The scanner boasts a number of features centered on patient comfort, including fat-free and motion-free imaging techniques combined with an in-bore visual system that allows patients to select a theme with video clips to play during the exam.