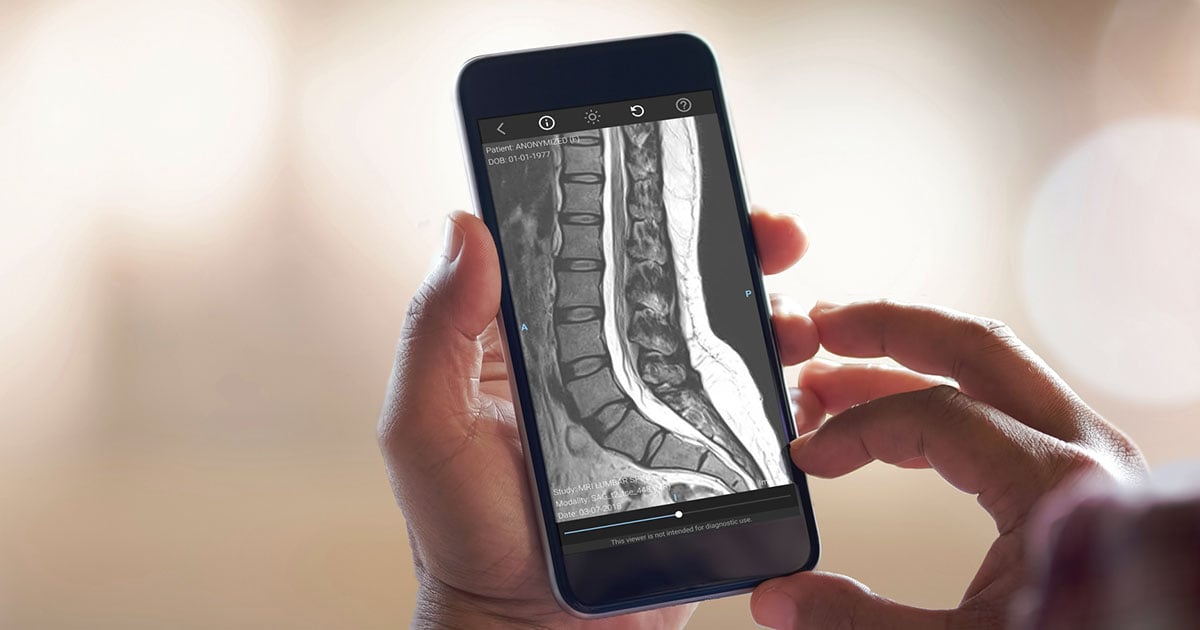 Mobile technology has become an intrinsic part of everyday life, with the vast majority of people owning smartphones, tablets or both. This has changed the way life is conducted, even the way people receive healthcare. According to healthcare data analysis firm IQVIA, there are some 318,000 mobile health (mHealth) apps available in major app stores, with another 200 being added every day. More importantly, IQVIA noted that more than 60 percent of people have downloaded a mobile medical application.1 At the same time, the business of healthcare has become more decentralized, as hospital networks build and acquire more locations to reach more potential patients where they are.

The dovetailing of these two trends is forcing healthcare providers and vendors to change the way they deliver care. For radiology, this means providing anywhere, anytime access to medical images for radiologists, referring providers and patients. Mobile viewing apps allow smart devices to become a gateway to the imaging archive, and with more vendors offering these tools, providers are working to find how best to fit them into their daily workflow.

The FDA and Medical Mobile Apps

The majority of medical technologies have to be approved by the U.S. Food and Drug Administration (FDA) before they can be sold for clinical use in the U.S. Unlike more traditional technologies such as imaging systems and processing software, however, mobile applications require a more nuanced approach.

The FDA approved the first diagnostic radiology app, Mobile MIM, in 2011, but it did not release full guidance on medical mobile apps until 2013. Recognizing the varied nature of mobile apps, the FDA chose to take a “tailored, risk-based approach” to regulation. The agency only regulates apps that 1) could potentially have an impact on patient safety, such as radiation dose calculators, or 2) turn a mobile device into a regulated medical device, such as one accessing software that requires 510(k) approval. The remaining category of unregulated medical mobile apps include those designated for patient education, fitness tracking, and apps for clinical reference and/or training.

Perhaps the biggest question with mobile device adoption in radiology is whether they offer sufficient resolution to allow diagnostic-quality viewing. The approval of Mobile MIM in 2011 was a milestone, because prior to that, mobile was largely considered appropriate only for secondary reading or consultations.

Numerous studies have supported this conclusion, including a pair of papers published in 2012. One study out of Singapore highlighted potential use of iPads for emergency radiology teleconsultations, showing less than 6 percent discrepancies between iPad interpretation and findings made on a PACS workstation.2 A second study from the University of Sydney compared diagnostic efficacy of iPads with LCD secondary display monitors for identifying lung nodules in chest X-rays, finding no significant difference between the two.3

Newer research suggests that the technology has improved and may be suitable for diagnostic reading. A 2019 Journal of the American College of Radiology study looked at the accuracy equivalence of head CT interpretations in acute stroke patients using a smartphone, a laptop or a PACS workstation. The PACS station employed Agfa Healthcare’s Impax 6.5 viewer software, while the laptop and smartphone readers used the Agfa Xero Viewer 3.0. The retrospective study had four neuroradiologists make 2,256 interpretations of 188 stroke patients. Accuracy equivalence was tested for:

The research team evaluated sensitivity, specificity and receiver operating characteristic (ROC) curves for each interpretation. The curves indicated similar reader performance across all three systems, and the researchers noted there was no more than 30 seconds of difference between reading time of mobile devices compared to the medical workstation.4

“We provide mobile as an alternative means of viewing, not a primary means,” said Mark Filiault, chief information officer of Connecticut Orthopaedic Specialists (COS). “You want to be looking at diagnostic quality on a diagnostic-quality monitor.”

Connecticut Orthopaedic Specialists is one of the largest orthopedic groups in the state, consolidating 64 orthopedic specialists across five practices. The group has 21 sites across the state, including two state-of-the-art MRI centers. According to Connecticut Orthopaedic Specialists Chief Information Officer Mark Filiault, the total imaging inventory includes three magnetic resonance imaging (MRI) systems and 24 X-ray suites, plus additional ultrasound and fluoroscopy systems. Filiault added that two of the three MRI scanners are office-based, while the third travels between two locations.

“We needed a common database for our inventory of DICOM and non-DICOM images,” he said. CT Ortho went fully online with the Ambra Health image cloud in the fall of 2017, and Filiault said there are now more than 1 million imedical images stored on the central server.

When a physician requests an image or set of images to their mobile device, the central server is requisitioned and a copy of the data is sent to the requesting device via a local server. Filiault said the image copies reside on the local server for 48 hours before being erased to protect private health information (PHI).

Other vendors with radiology viewing apps include:

•    Novarad: Novarad received FDA approval for the MobileRad app in 2016, which integrates with NovaPACS to display data on a third-party mobile device. The company also features the SnapView application, which enables clinicians to securely collect non-DICOM images in departments like  wound care, ED, ophthalmology and dermatology. Images are transferred directly to the Novarad archive from iOS, Android and Windows mobile devices, with no PHI left behind on the device.

•    Candelis: Candelis earned approval for the Astra Mobile application as part of its Astra software services in 2011. Astra Mobile enables users to receive, view, download and print medical reports and key images anywhere in the world.

•    Carestream: Carestream’s Vue Motion universal viewer earned FDA approval for use on mobile devices in 2011. The clearance has expanded to allow access from multiple operating systems and via a web brower with operating platforms utilizing HTML5, including PCs, Mac and validated mobile devices.

The Future of Mobile in Radiology

Like any technology, new applications will continue to emerge for mobile devices in medical image viewing.

Connecticut Orthopaedic Specialists (COS) is currently working on two pilot projects to expand its use of mobile technology with both providers and patients. In one case, Filiault said his physicians are bringing iPads into the exam room to show patients their images during appointments. “It’s more of a visual aid and a courtesy to the patient,” he said. This year, COS also began offering a radiology patient portal where patients can access and download their own images. Filiault said this has significantly decreased the number of CDs being burned to move images from one provider to another through the patient.

1. The Growing Value of Digital Health: Evidence and Impact on Human Health and the Healthcare System. IQVIA, Nov. 7, 2017. https://www.iqvia.com/institute/reports/the-growing-value-of-digital-health 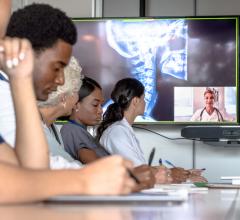 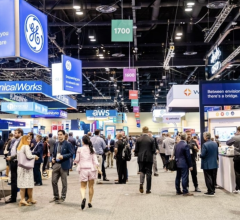 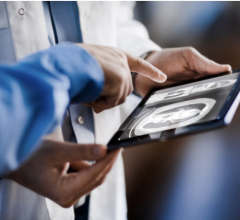