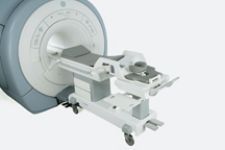 August 6, 2021 — Oncotarget published "MRI texture features from tumor core and margin in the prediction of response to ...