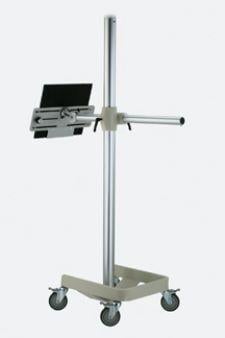 The Compu•cutter III is less than half the size of its predecessor without sacrificing quality and accuracy. It is available as a complete package or as a single unit that can plug and play with an existing configuration. Huestis software is compatible with any Windows-based OS, allowing for image manipulation, correction and cutting.
Huestis has teamed up with Agfa for a radiotherapy CR. They will be showing the Flexi•holder, which reduces retakes caused by improper cassette positioning. Extremely stable, its wide base allows for accurate radiographs to be taken from virtually any angle. A change from film/screen to the Agfa CR can save radiotherapy departments on film usage, chemicals and image storage space, with all the benefits of digital imaging.