The Power of Better Monitoring

Pennsylvania hospitals save lives and money by relying on nurse knowledge and the right tools. 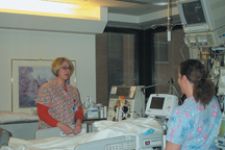 Many process improvements have recently been developed and implemented at the University of Pittsburgh Medical Center (UPMC), part of a 16-hospital network in southwest Pennsylvania. As part of the widespread improvement program, the hospital’s approach to critical care was redesigned in an effort to improve efficiency and reduce costs.
An important change was the creation of rapid response teams and nurse-driven monitoring, which utilized the FloTrac sensor — a minimally invasive hemodynamic/cardiac output monitoring device — and the Vigileo monitor, both from Edwards Lifesciences (Irvine, CA). Significant savings, in human life as well as on the balance sheet, were quickly realized by UPMC within the first year of implementing the new approach.
Nurse manager and director of Surgical Critical Care Al Minjock says that critical care nurses received in-house education for all the new procedures, and many advanced to a separate class, Advanced Nurse Monitoring.
“By offering this,” he said, “we are telling the nurses that we really value them and their experience and training, and we want them to be proactive in monitoring.”
Criteria were established for using FloTrac in the ICU. For example, one protocol called for monitoring with the device when the patient’s hypotensive, mean arterial pressure was less than 60 for more than five minutes. The FloTrac measures continuous cardiac output.
“We let the nurses decide when to use these,” said Minjock, “and now we are catching things earlier.”
Using their knowledge and expertise, nurses who see a decline or detect any problems with a critically ill patient now call and a physician evaluates the patient within five minutes. Both ScVO2 and FloTrac are used together 90 percent of the time.
“With this procedure, we identified 12 patients in the first 12 months whose lives were saved by the early intervention,” said Minjock. “They would not have been treated as quickly without it.”
He also noted that, with experience, the nurses are much more comfortable interacting with the monitoring machines and making the judgment call — it has also improved nurse retention, he says. Because FloTrac is easy to use, nurses are able to expedite prompt continuous cardiac output (CCO) monitoring using an existing peripheral arterial pressure line, and the Vigileo monitor does not require any human calibration.
FloTrac monitoring was used in two particularly complex cases at UPMC, involving numerous complications, Minjock explained.  Because the hospital system maintains a large database for all patients admitted to its hospitals, enabling comparison of parameters by diagnosis, Minjock was able to determine that these two patients spent significantly fewer days on a ventilator in the ICU and in the hospital than other patients with the same diagnoses who were not monitored with the device.
“Watching these patients more closely allows us to have better outcomes, which translates into significant savings in the cost of hospitalization,” Minjock said. “Maintaining tighter control is going to save money — we’re getting better cost savings and our patients are getting better outcomes.”