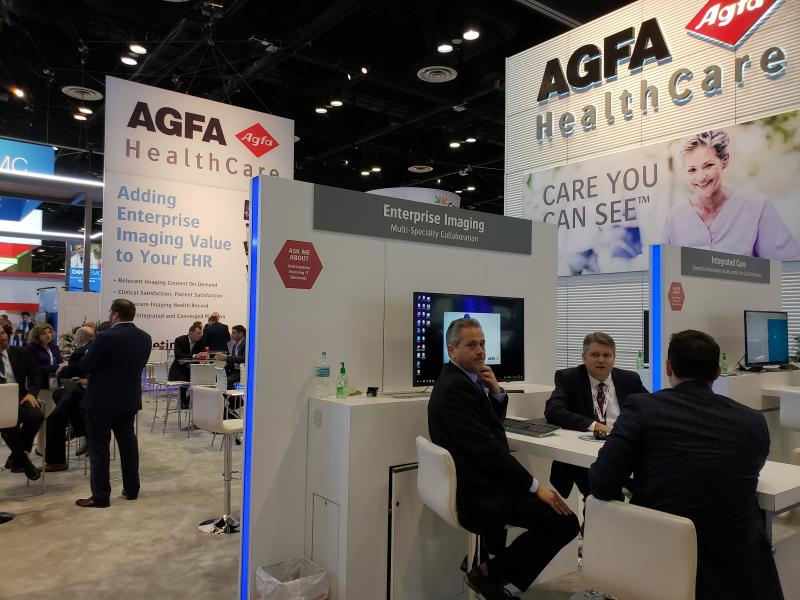 At the first trade show since becoming an independent information technology (IT) vendor, Agfa HealthCare declared its concentration is now on enterprise imaging and not on picture archive and communication system (PACS) market.

“We don’t sell PACS any more (in North America). All we (offer here) is enterprise imaging,” said Lenny Reznik, vice president of Agfa HealthCare’s IT business unit. He noted that in Europe the company sells an electronic medical record technology, as well as enterprise imaging. He said PACS is still a component of enterprise imaging, but is more of a module like cardiology, oncology or other subspecialty systems, not the primary focus. He said health systems want solutions that address needs across the healthcare continuum, not just in radiology anymore.

Describing PACS as silo-based, departmental solutions, Reznik said the provider who wants one “probably is not our target customer.” Agfa HealthCare prefers to work in what Reznik called “virtual health,” which is achieved through technologies that engage patients in their healthcare.

Although still part of the Agfa-Gevaert group, Reznik said, the company is “now 100 percent focused on healthcare IT,” having attained independent status in late 2018. The 2019 annual meeting of the Healthcare Information and Management Systems Society (HIMSS) is the first trade show where Agfa HealthCare is “appearing as a standalone entity that is 100 percent focused on healthcare IT.”

Reaching Out To Providers At HIMSS19

Adding detail to the company tagline, “Your patients deserve to be seen,” Reznik explained that the company wants to get “every image inside the EMR.” Achieving this entails more than the purchase of technology, he said. Rather, it requires the implementation by customers of a strategy that takes “consultative efforts between Agfa and hospital providers who have that vision.”

Agfa is trying to assist in enterprise imaging, he said, by helping providers address key pain points. One of these is the capture of otherwise elusive revenue. Reznik referred to this as “point of care imaging.”

One example is point of care ultrasound, whereby a physician may use the highly portable technology to answer questions about the cause of a patient complaint. Typically such procedures are not billed for reimbursement because they are not documented.

Point of care imaging may also include patients who use digital cameras, often in their smartphones, to capture and send “medical selfies” into the EMR. These medical selfies, Reznik said, often involve wound care.

“When a patient arrives at a hospital with a certain wound, there is always a follow-up that has to occur,” he said. “But everybody has a medical device at home now — it is called a camera on their phone.”

Although the FDA does not consider these cameras to be medical devices, Reznik said, they are used for medical reasons. And they can be enormously helpful in leading to clinical follow-ups.

Agfa HealthCare is responding to the changes, which Reznik said are already in place, with telehealth pilot programs. In one, dubbed “teledermatology,” he said the company is working with a specific customer “not just on the technology but to understand the reimbursement models that could be impacted by implementing a strategy.” This strategy, he said, involves enabling the customer’s EMR to handle optical images and “understanding the service lines,” or medical specialties that may have need to see the images.

Helping customers capture reimbursements that previously eluded them adds money to the customer’s bottom line, Reznik said.  This can help prop up the budget, as it helps providers justify the implementation of technologies and techniques that might later serve as part of the infrastructure for a broadly based enterprise imaging network, Reznik said.

This is one of the ways Agfa hopes to improve patient care. Agfa HealthCare is focusing on population health with applications that go beyond PACS, he said.

This is why “we don’t call our enterprise imaging solution a PAC system,” Reznik said.