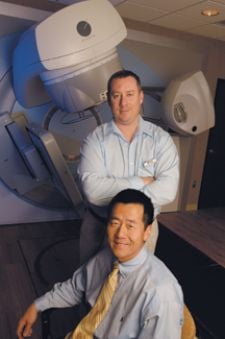 Increasingly, U.S. community cancer centers are among the diverse clinical environments pioneering the use of Elekta Synergy systems, the leading commercial system for treating cancer patients using Intensity Modulated Radiation Therapy (IMRT) and Image-Guided Radiation Therapy (IGRT).
Ironwood Cancer & Research Centers (Chandler, AZ.) – which opened in January 2006 – exemplifies one of the more prolific of these community-based Elekta Synergy system installations – located right in the neighborhood of most of its patients.
“The literature increasingly reflects a trend toward image guidance, and we wanted to stay ahead with the latest technology,” said Ironwood Radiation Oncologist Charles Woo, M.D. “Elekta Synergy clearly has proved to be an exceptional IGRT system.”
Ironwood Uses IMRT and IGRT Capabilities in Half of Cases
Only a few months after opening, Ironwood was treating 25 patients who were receiving IMRT treatments for prostate, rectal, upper abdominal, gastric, pancreatic and head and neck cancers that included an X-ray volume imaging (VolumeView) acquisition as part of the daily pretreatment routine. Today, half of the patients treated at Ironwood will have this IGRT step conducted as part of their treatment – in a center that uses Elekta Synergy to treat about 40 patients daily, Dr. Woo says.
“Elekta VolumeView image acquisition adds only about four minutes to each treatment session,” he observed. “I was pleasantly surprised with how smoothly things operated. We’re also using VolumeView to register kidneys and keep them out of the high dose area. This gives us confidence to plan their treatment.”
Fostering Confidence from the Start
Ironwood Chief Therapist Brent Applegate recalls Ironwood’s first Elekta Synergy case in January 2006. The patient had primary pancreatic cancer, which typically incurs extreme side effects under standard external beam treatment regimes.
“Patients usually tolerate only two to three weeks of treatment and then give up,” Applegate observed. “We let this first Elekta Synergy patient know that we were using a new radiation treatment technology that will give us a good idea of what we’re treating and possibly help us avoid affecting normal tissues. The patient received 33 fractions at 1.8 Gy per fraction, 59.4 Gy total dose and didn’t suffer a single side effect.”
The Vision to Reduce Margins
Applegate and Dr. Woo credit the excellent image quality of VolumeView and the accuracy that superior visualization can bring in margin reduction as key factors in all Elekta Synergy cases. “It’s very easy to see the soft tissue structures,” Applegate noted. “It takes about a minute to acquire the image and the image is reconstructed very quickly and ready for analysis. Then, Elekta Synergy recommends shifts in all three planes.”
“Typically, for a prostate case, accuracy is two to eight millimeters,” Dr. Woo added. “With Elekta Synergy, we’ve been able to use tighter margins due to less uncertainty in prostate position. We’re using five millimeters margins around the prostate, three millimeters posteriorly around the rectum, which is quite conformal.”
In Applegate’s view, Elekta Synergy has had a major impact on cancer management. “This is the first development that I think is really making a significant difference in linac-based treatment,” he said. “Going from skin tattoos to IGRT, where the therapists can say they know their beams are right where they need to be on a daily basis, is tremendous. We’re completely elated with what we’ve achieved so far with Elekta Synergy.”