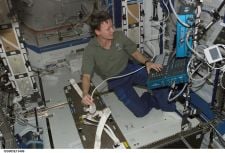 In March of 2001 a specially modified Philips HDI 5000 ultrasound system was installed on the International Space Station's Human Research Facility. It is being used to monitor the astronauts' health and to conduct experiments. Pictured: Expedition 5 Flight Engineer Peggy Whitson. (Photo courtesy of NASA) 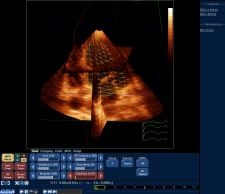 In March of 2001 a specially modified Philips HDI 5000 ultrasound system was installed on the International Space Station's Human Research Facility. It is being used to monitor the astronauts' health and to conduct experiments. Pictured: Expedition 5 Flight Engineer Peggy Whitson. (Photo courtesy of NASA)

Two of the six astronauts from the shuttle mission Atlantis became part of an ongoing cardiovascular study at NASA about four hours after the shuttle landed at the Johnson Space Center early last Friday morning. Imaging their hearts — both pre- and post-flight — with Philips’ iE33, 3-D echocardiography system, investigators for the ongoing research were given just 30 minutes to collect data that will eventually help them determine why loss of heart mass occurs after space flight, and further, how inactivity impacts heart health.

NASA’s Cardiovascular Laboratory at the Johnson Space Center acquired the Philips equipment because of its portability and cost-effectiveness, said David Martin, ultrasound lead for the lab, and because of the speed with which a full-volume image of the beating heart can be obtained — heart rate, blood pressure, stroke volume, ejection fraction, strain rate and cardiac wall motion can all be captured in less than a minute.

“We’re looking for quantifiable things such as changes in LV mass, chamber sizes and diastolic function,” said Martin. The microgravity environment of space translates into very low levels of physical activity for humans who venture there.

Although imaging time is fast, collection of statistically relevant data among so small a population proceeds at a plodding pace. Periodic testing of a few shuttle astronauts — and only those who are first-time fliers or who have experienced previous orthostatic intolerance, according to Martin — will keep results of Martin’s research in the distance for a long time, he said.

To supplement the astronaut heart data, a separate ground-based NASA study is also in progress in the Galveston, TX, area that examines the effects of inactivity on the heart. Martin said a group of healthy subjects is currently undergoing 90 days of complete, uninterrupted bed rest, with their heads tilted at 60 degrees to mimic the fluid shift that occurs in microgravity.

“Bed rest [will] help us answer a lot of questions that we couldn’t answer before,” said Martin.

Namely this: Does total inactivity — such as long-term bed rest for another health condition — have potentially detrimental implications for a person’s heart?

“That’s the concern, and it’s still an open question,” said Martin. “Like any other muscle, if you don’t use it, it’s going to atrophy to some degree.”