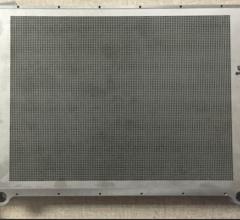 Adding this variable angle slant hole collimator to an existing breast molecular imaging system allows the system to get six times better contrast of cancer lesions in the breast, providing the same or better image quality while also potentially reducing the radiation dose to the patient by half. Technologies developed at DOE’s Jefferson Lab for the variable angle slant hole collimator are included in two filings to the U.S. Patent and Trademark Office. Image courtesy of DOE’s Jefferson Lab.

News | Breast Imaging | June 21, 2016
Innovative Device Allows 3-D Imaging of the Breast with Less Radiation
Preliminary tests have demonstrated that a new device may enable up to six times better contrast of tumors in the...
read more