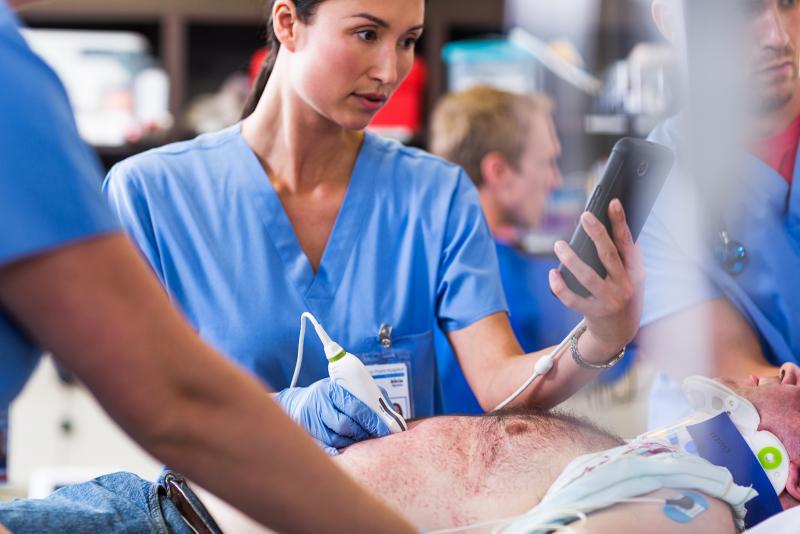 But digital radiography was not embraced in those early years. The first detectors were difficult to fabricate, expensive to buy and available only in small sizes. Chest DR? Not for a while. And when large panels did appear, they were fragile, which is why DR took so long to become part of mobile X-ray.

Those days are all but forgotten now, lost in a tightly punctuated timeline leading to the present. In a few weeks, at McCormick Place in Chicago, Konica will show wireless panels that can withstand patients weighing up to 660 pounds. Carestream will present third-generation DRX Plus panels that can be submerged under a meter of water for 30 minutes without failure — so much for exposing flat panels to body fluids. As if anyone remembers them.

Since entering the market in 1998, Canon has sold 30,000 DR detectors. Thirty thousand! And that’s just Canon.

What makes all this so astounding is that today these facts are blasé, taken for granted, as if they were always true … as if DR were always so capable. It was not, no more than magnetic resonance (MR) and computed tomography (CT) burst into medicine guns blazing with clinical relevance.

At its inception, MR displayed anatomy with crystal clarity but little else. With the possible exception of multiple sclerosis’ characteristic “string of pearls” first seen on MR images in the 1980s and tied to demyelination documented in animal research decades earlier, MRI was diagnostically unproven. CT’s first brain image, cast in 1971 on an 80 x 80-pixel matrix that took two and a half hours to process, looked like a bowl of oatmeal.

Ultrasound? An early prototype repurposed the gun turret of a surplus B-29 into a water bath. The patient sat in it, a lead weight tied around his abdomen to prevent floating, while a transducer circled. In 1946 nuclear medicine came after, not before therapy, the filmed depiction of an atomic cocktail given to treat a patient with thyroid cancer. In the years that followed, nuclear became an anagram for “unclear.”

Yet each modality persevered until today radiology is digital from CT and MR to ultrasound and X-ray, and, most recently, even to nuclear medicine. And patients are better off for it. As time goes on, they will be more so.

Radiology continues to reinvent itself, evolving with the introduction of new digital technologies implanted in its DNA like nucleic snippets conferring new traits to genetically modified foods.

Spectral CT from GE and Philips, and Siemens’ dual-energy CT, deliver information about the chemical composition of body tissues, structures and contrast media by leveraging quantitative analyses of X-rays at different energies. From super premium CTs to entry level products at RSNA 2015, all will feature low-dose scanning, the ultimate expression of imaging’s concern for patients. Niche products will show how specialty applications can reshape scanner design: orthopedics’ effect on a work-in-progress CT in the Carestream booth; women’s health on an FDA-approved breast CT at Koning.

Altogether free from ionizing radiation, MRI has morphed into wide-bore configurations that have carried on the mission of open MR, offering relief to patients fearful of tight spaces without compromising scans. Patient comfort exerts its influence through Toshiba’s Pianissimo, which damps noise, and GE’s Silent Scan, which can all but eliminate it.

Ultrasound has become smaller, lighter, easier to operate, eminently programmable and exquisitely adapted to patient needs. On the exhibit floor, Philips will showcase Lumify, a smartphone app with USB-pluggable transducers.  Three years have passed already since Siemens launched its Freestyle, featuring wireless transducers that markedly decrease the risk of infection, when used at point-of-care.

The steak-and-potatoes hybrid of positron emission tomography (PET) and CT, which galvanized oncology at the turn of the millennium, may cede its position in some instances to a steak-and-broccoli combo of PET and MR that promises to deliver similar clinical results without the ionizing radiation of CT.

Today physicians and administrators are perched on a transition from volume to value medicine. And radiology couldn’t be in a better position. Digital innovations have made radiology patient-centric.

Editor’s note: This is the second blog in a series of four by industry consultant Greg Freiherr on The Evolution of Radiology. You can view the first blog in this series, "Radiology Faces Frightening New World," here.